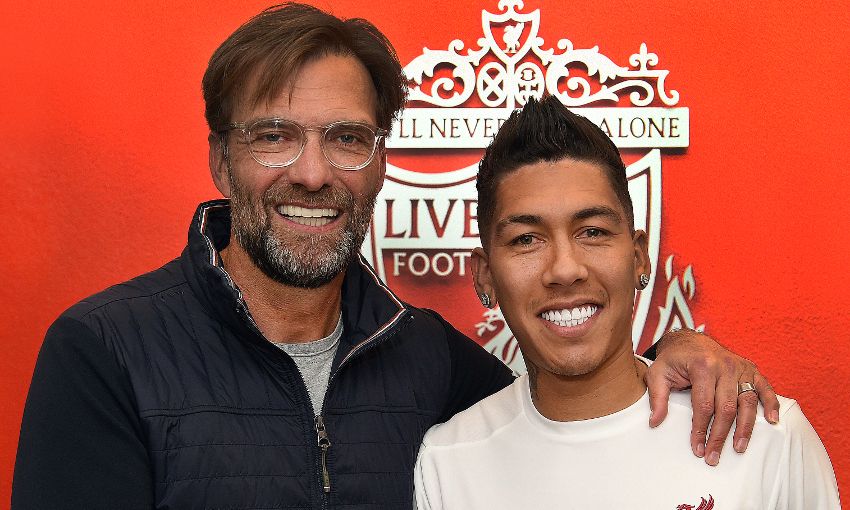 Roberto Firmino's decision to commit his future to Liverpool by agreeing a new contract is 'unbelievably important news' for the club, according to Jürgen Klopp.

It was announced on Sunday that the Brazilian striker had shaken hands on fresh terms with the Reds, confirming his desire to extend an Anfield stay that is now in its third season.

Klopp, who has overseen the 26-year-old's conversion from attacking midfielder to out-and-out No.9, is absolutely delighted to have tied down the focal point of his forward line.

And the German boss expects more players to follow in Firmino's footsteps.

"It's unbelievably important news for us. Really cool," he said.

"I heard what he said about it being an easy decision for him and I can really imagine that it was. He knows and appreciates absolutely this club.

"This is one very important step for us. Absolutely. But even Roberto cannot play alone. We need to carry on in this way.

"In the moment every player knows about our plans. He's the first but for sure he won't be the last."

Despite notching 27 goals in 50 appearances in all competitions this season, Firmino is more renowned for graft over craft by the wider footballing world.

But Klopp insists there is nobody at Melwood who does not fully appreciate what the former Hoffenheim man brings to the table.

"The other boys really respect him for all the work he's doing," he added.

"This constant discussion about whether he's undervalued or whatever in public, this never happened for one second either in the club or in the team.

"He feels completely comfortable and is planning for the long-term here. That's becoming rare because if you are not Barcelona or not Real Madrid then there's usually another club somewhere you can go to.

"It's really good news for us. He's absolutely a big factor in our future."

However, the manager couldn't resist paying tribute to the world-class work-rate of a man he has previously described as 'the engine' of his team.

"He's a footballer, from his head to his toes. He enjoys playing football and he's not bothered about hard work, which is another important thing," he continued.

"Because [James Milner] didn't play the last game from the start [against Stoke City], Roberto had the highest distance covered. For an offensive player that is pretty rare in world football.

"I often think that because he doesn't give himself a rest I have to do it from time to time. That's all good and how football should be.

"You play it because you have the opportunity to make your mates better and they help you to become the best player you can be. It's as simple as that.

"I am happy to have Roberto around - he's just a good boy in the dressing room. It's perfect news."