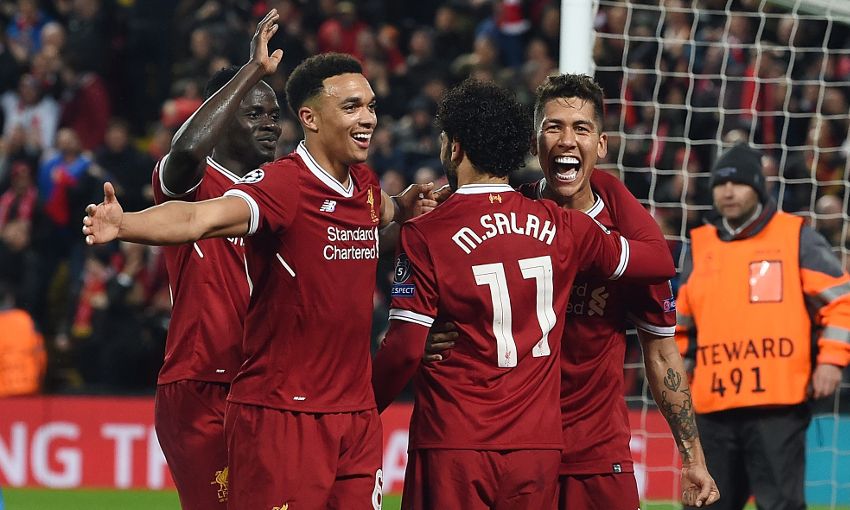 Liverpool's unstoppable front three spread the confidence that carried their teammates to a scintillating 5-2 victory over AS Roma in the Champions League.

The Reds established a promising advantage against the Italian club in the first leg of the European semi-final courtesy of another exhibition of world-class attacking football.

Mohamed Salah was at the heart of everything, curling and dinking the opening two goals before setting up Sadio Mane and Roberto Firmino – who later headed home from a corner, too – in the second half.

The trio have now notched 88 goals between them this term and while Trent Alexander-Arnold’s career remains in its infancy, the full-back has yet to witness anything to match Firmino, Mane and Salah.

“I’ve never played with a front three like that before. I’m not sure if any of the other lads have,” the No.66 told Liverpoolfc.com at Anfield.

“We all step out onto the pitch confident that at least one of them – if not all of them – are going to score. We have confidence and they have that confidence within themselves.

“If you look at their numbers this season, it’s incredible and a credit to them because they’ve worked hard for it. The confidence flows throughout the whole team.

“It has been like that a few times now, in the Champions League especially. We’re running away with the result quite early; once we get the first one, it’s quite hard to stop the flow of the goals. That’s credit to the whole team.

“Maybe in the last 10 or 15 minutes our concentration let us down a little bit.”

The period the defender references saw Roma strike back and claim a lifeline in the tie.

Edin Dzeko snuck in behind Dejan Lovren to control Radja Nainggolan’s long pass and knock a finish past Loris Karius before Diego Perotti converted a penalty given for a James Milner handball.

“The five goals were good but at the end we’ve come away disappointed. We’ve conceded two and given them a bit of a chance,” said Alexander-Arnold.

“We should have been more ruthless and put the tie to bed with the five goals effectively. But we can’t be too disappointed – we’ve got to bounce back next week. We’re still ahead in the tie and we’ve got to look to get into the final.

“They haven’t conceded at home in the Champions League so obviously it’s going to be tough. But we’ll go there and try to finish the job off and hopefully get to Kiev.”