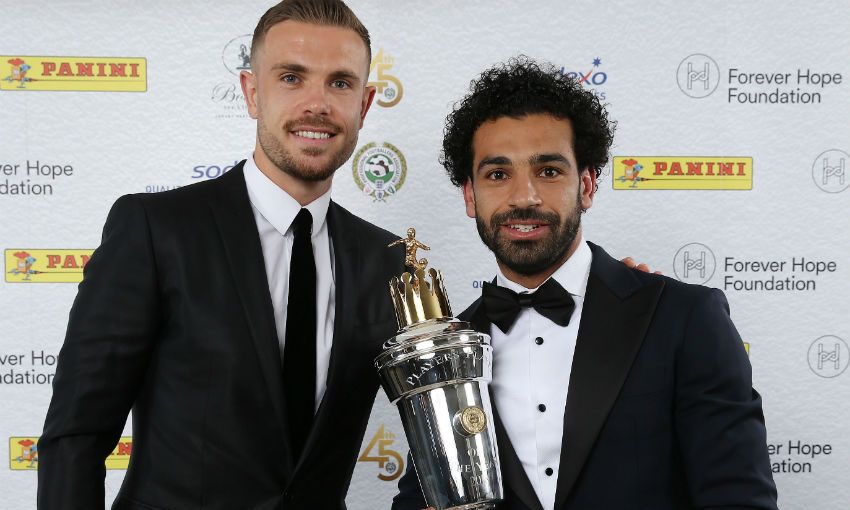 Jordan Henderson paid tribute to PFA Players’ Player of the Year Mohamed Salah by saying his teammate has been ‘amazing’ since the day he joined Liverpool.

Salah was honoured at a ceremony in London on Sunday evening, with his incredible first season with the Reds - which has featured 41 goals in just 46 appearances - being recognised by PFA members from the 92 Premier League and Football League clubs.

Henderson was also present at Grosvenor House, and the captain spoke in glowing terms about his prolific teammate - both on a personal and professional basis.

“As a person, he’s a really good person, he’s humble and genuine and he fits in really well with the group,” Henderson said.

“As you’ve seen, he came straight in in the summer, settled in really well in pre-season and straight away we knew we had a top player that’s come to the club to try and do something with our team.

“He was amazing in training, amazing in the pre-season games and he’s just continued that form throughout the season. He’s been fantastic, on and off the field.”

On whether Salah had exceeded his teammates’ expectations, Henderson stated: “I think we expected him to be good, but I think he’s gone above and beyond that really.

“He keeps improving, he keeps getting better and better with each game, more confident of course.

“Obviously the manager’s helped him loads since he’s come to Liverpool, the players have been brilliant around him, so he’s had a good group of lads that he’s come into and that’ll have helped him develop as well.

“But all the hard work goes down to him, he’s in the gym all the time, improving his strength and in training he’s always working hard for the team, and he gets his just rewards at the end of it.

“He’s always doing work behind the scenes, always in the gym doing little bits here and there and working on his shooting and stuff in training, always working hard on what he needs to do for the team first and foremost, but then his goal tally speaks for itself really.”