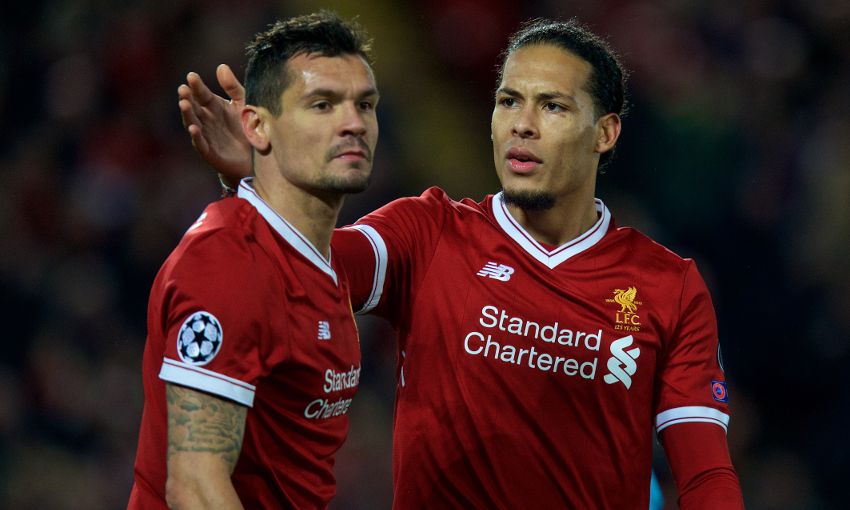 Virgil van Dijk and Dejan Lovren were in imperious form at the heart of Liverpool’s defence against Manchester City on Wednesday night – but were eager to stress they’ve only completed half of their job.

The pair were commanding in helping to foil Pep Guardiola’s side’s second-half push to get back into the contest after they’d been blitzed by three first-half goals from the Reds.

Strikes from Mohamed Salah, Alex Oxlade-Chamberlain and Sadio Mane had put the hosts in control after just half an hour at a vociferous Anfield and the defensive stubbornness displayed in the second period means they take a 3-0 lead to Etihad Stadium next Tuesday night.

“It was massive to get three goals and a clean sheet to take with us to Manchester,” Van Dijk told Liverpoolfc.com. “The first half was good; there were a couple of things that could be better. In the second half we struggled a bit; we weren’t calm enough and a bit sloppy. But it was very important to keep a clean sheet and we did.

“It’s pretty clear it’s still going to be very difficult [in the second leg]. But we just need to be well prepared. They’re going to come, we need to be ready for it and play our game.”

Van Dijk’s sentiments were echoed by his central defensive colleague, Lovren – who highlighted the importance of preventing City from claiming an away goal in the tie.

“I believe in our team but it’s always difficult to predict what will happen against Manchester City,” he said. “We showed last time we are capable of scoring many goals – but also we can concede against them.

“This time we did quite well to not concede, which is important, especially in the Champions League. It’s a big result but we have a massive game again there. Nothing is over. We needed to play better in the second half, to play football and enjoy it.

“It’s important in the Champions League; if you concede it changes a lot. Everyone defended well from the first to last minute. It was brilliant, especially at Anfield with such an amazing atmosphere.”

That atmosphere, Van Dijk believes, was an important factor in helping Liverpool produce such an exhilarating performance in the first period, and then such a stubborn display after the break.

He said: “It was amazing. It gives you an extra boost – especially in the second half when we were defending a lot, to keep going. It gives you a little bit extra. It’s just amazing to play in that atmosphere.”