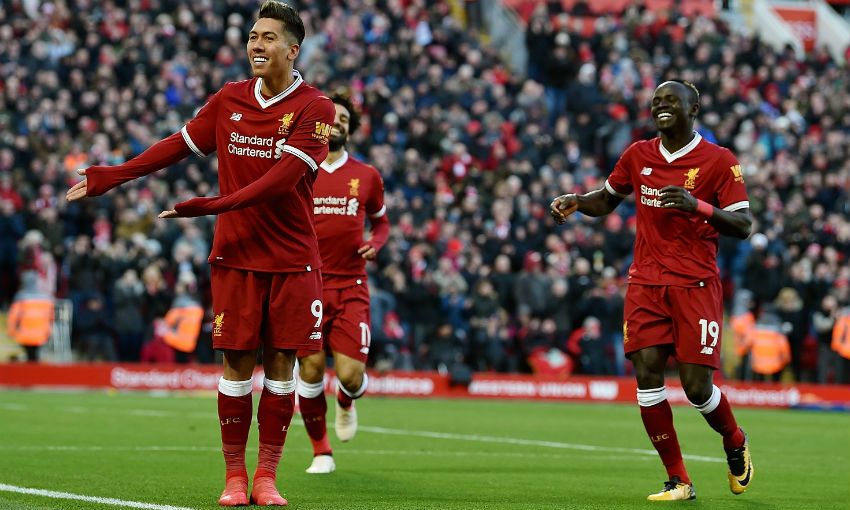 Liverpool climbed to second in the Premier League as goals from Emre Can, Mohamed Salah, Roberto Firmino and Sadio Mane secured a 4-1 win over West Ham United.

Jürgen Klopp’s side returned to action after a 10-day break with a solid performance at Anfield, taking control of the game once the deadlock was broken on the half-hour.

That came from Can, who headed in Salah’s corner, and the Egyptian bagged his customary goal six minutes into the second half to provide a cushion for the Reds.

Firmino and Mane added their names to the scoresheet, with the only frustration Liverpool’s failure to keep a clean sheet – Hammers substitute Michail Antonio claimed a consolation.

Klopp made three changes to his starting XI, 10 days on from the 5-0 win at FC Porto, with Can, Joel Matip and Alex Oxlade-Chamberlain brought into the side.

Danny Ings and Georginio Wijnaldum were absent due to illness.

On a bitterly cold afternoon at Anfield, both sides got right to it.

With only three minutes on the clock, James Milner threaded a pass in behind to Firmino and from the left channel the Brazilian picked out a pull-back to Salah at the edge of the box.

The No.11 aimed a low effort towards the far corner and it seemed on course for the inside of the post as it bobbled – but instead bounced back off the woodwork and out.

Virgil van Dijk met a corner with a header that was directed straight at Adrian, before Loris Karius produced a crucial fingertip save at the other end. 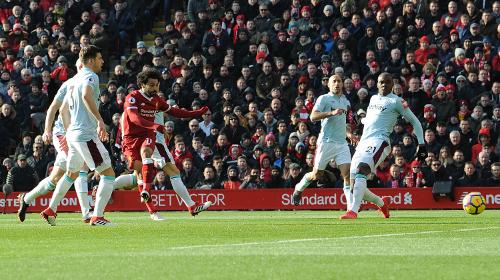 Marko Arnautovic scooped up a long pass that was flicked on, drove diagonally into space past Matip and clipped a delicate dink across the Reds goalkeeper, whose touch diverted the ball onto the crossbar.

But the West Ham stopper was beaten on 29 minutes.

Salah’s corner into the area from the right flank reached Can in the vicinity of the back post and the midfielder’s nod at goal nestled in the bottom corner. It was Liverpool’s 100th of the season.

The Germany international swept a curler wide moments later and Salah headed too high from Robertson’s excellent cross from left to right. Arnautovic drew a diving save from Karius with a long-distance punt, too.

The frequency of chances continued after the interval and only six minutes of the second period had elapsed when Salah found the net at the Kop end.

He was indebted to Oxlade-Chamberlain’s persistence in midfield, the Englishman holding off a succession of heavy challenges to force the ball into the area, but his finish – slid across Adrian – was typically cool.

The Reds sensed an opportunity to pounce and Firmino joined the scoring when West Ham surrendered possession carelessly in the centre of the pitch.

Can lofted a pass over to the 26-year-old in the left channel and, having moved around the outrushing ‘keeper, there was time and space for a no-look finish into an empty net. 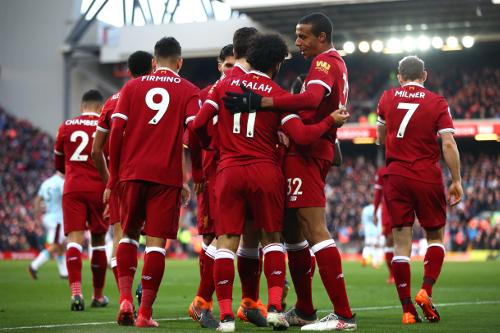 David Moyes’ team struck back within two minutes. Cheikhou Kouyate was strong in the tackle and spread an inviting assist into Antonio for the substitute to side-foot a shot beyond Karius.

Adrian denied Liverpool with a series of smart stops and Mane hit the outside of the post, but the Senegalese forward eventually grabbed his goal.

Firmino fed the supporting Robertson on the left wing and the Scot’s measured, rolled cross into the middle was perfect for the No.19 to lift into the net and cap a fine afternoon that concluded with Klopp’s men in second place.