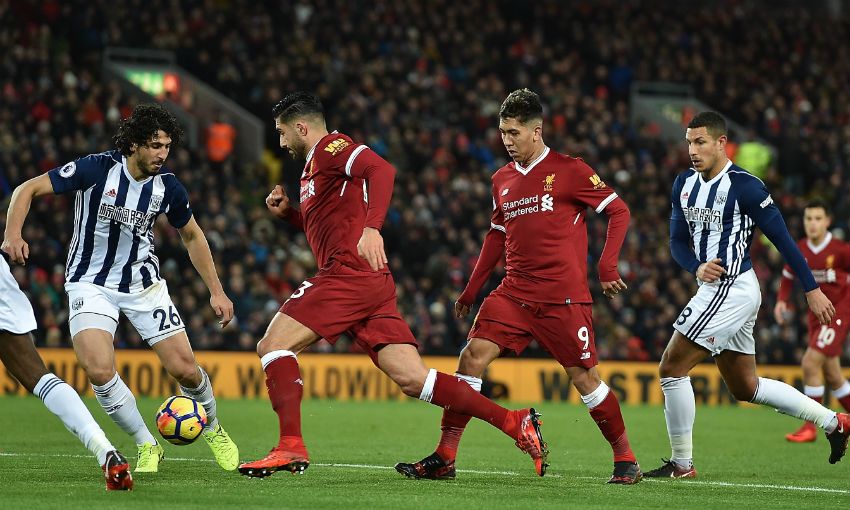 Liverpool were forced to settle for a point for the second game in a row as West Bromwich Albion claimed a 0-0 draw at Anfield.

In a game short on clear-cut opportunities, Hal Robson-Kanu hit the woodwork in the first half and substitute Dominic Solanke had a late conversion chalked off for handball.

Klopp again sought to freshen up his starting XI, with perhaps the most notable of six changes the one in goal – Loris Karius replaced Simon Mignolet, who suffered a minor ankle injury last time out.

With both Jordan Henderson and James Milner on the bench, Philippe Coutinho captained Liverpool.

It was a tepid opening 10 minutes at Anfield. Faced once more with a deep-lying opposition defence, the hosts allowed themselves the opportunity to gauge where the gaps might be.

Indeed it was past the quarter-hour when the first chance of note was created.

The genesis was Sadio Mane’s smart backheel into Mohamed Salah, who quickly shuffled inside his marker and – rather than a trademark shot – threaded a cross towards the back post.

Waiting to pounce behind the helpless Allan Nyom was Roberto Firmino, but the Brazilian’s effort back across goal was directed the wrong side of the far post.

Further openings were scarce, however, and in fact the Reds were fortunate not to fall behind against the run of play at the 30-minute mark.

West Brom not only prevented the ball from being played out of Liverpool territory but worked it to Robson-Kanu in space – and the forward’s audacious attempt to loft a finish over Karius from 25 yards bounced off the top of the crossbar.

Salah was agonisingly close to a tap-in when Trent Alexander-Arnold spun a fine delivery into the area but couldn’t make contact, before Mane’s poor touch foiled a counter-attack from a Baggies corner.

Firmino forced the issue with a drive into the box from the left but both his hit – and Salah’s on the follow-up – were blocked by Albion bodies. Goalless at the break.

Karius had to make two stops in quick succession early in the second half, first tipping over an inswinging set-piece from Grzegorz Krychowiak and then repelling Claudio Yacob’s near-post header from the resulting corner.

As Klopp’s men responded, Mane sliced a presentable chance wide from the edge of the area and Salah was off target with a header when Alexander-Arnold found the Egyptian with a cross.

Ben Foster almost gifted Liverpool the breakthrough by fumbling his own punched clearance from Mane’s delivery, but the visitors cleared their lines before Georginio Wijnaldum could pounce.

With 15 minutes remaining, Klopp made a double switch – on came fresh attacking options in Alex Oxlade-Chamberlain and Solanke, with Mane and Wijnaldum taken off.

And Solanke thought he had won it for the Reds soon after.

Joe Gomez, also sent on from the bench, picked out his teammate yards from the West Brom goal but though the ball bounced off the summer signing and beyond Foster, it did so via an arm.

The Englishman was then thwarted by a goalline clearance from Ahmed Hegazi, after the ball squirmed to Solanke inside the box – leaving Liverpool with just a point on the night.