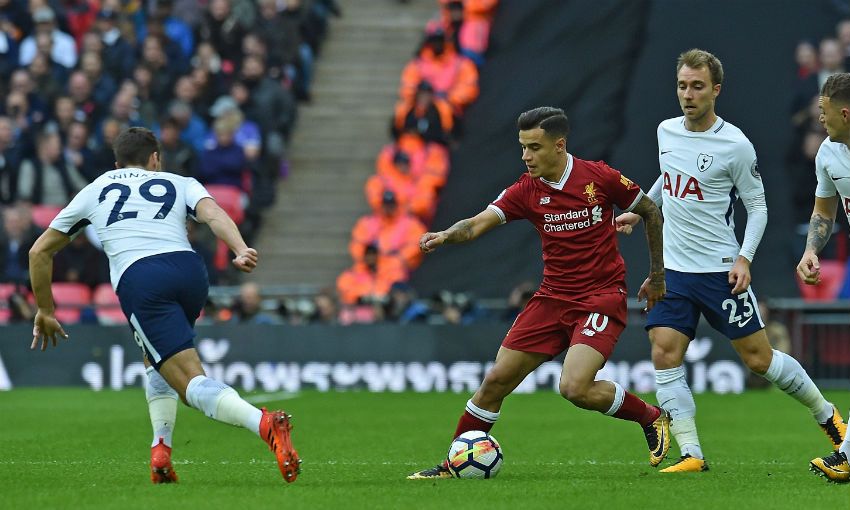 Photos: Defeat for Liverpool against Tottenham

Liverpool were beaten 4-1 in their Premier League clash with Tottenham Hotspur at Wembley.

Harry Kane bagged the opening goal and set up Heung-Min Son for the second to put a confident Spurs side two to the good within 12 minutes.

The Reds responded through Mohamed Salah’s cool finish from Jordan Henderson’s assist, but Dele Alli drove in a stoppage-time volley to ensure it was the hosts who went into the break well on top.

Kane converted a fourth shortly after the restart to douse any hopes of a comeback for Jürgen Klopp’s men, for whom this was a second league defeat of the season.

With Georginio Wijnaldum ruled out due to a knee injury, Klopp made three changes to his line-up from Tuesday in Maribor. Joe Gomez, Henderson and Simon Mignolet returned.

Liverpool’s midweek Champions League victory was all about control but on this occasion Klopp’s men surrendered the early grip of the game to Spurs.

Indeed, the Reds fell behind with four minutes on the clock.

Kieran Trippier lofted a pass over Dejan Lovren for the run of Kane, who saw Mignolet emerge from goal so cutely stepped around the Belgian and Joel Matip to create the gap for a finish.

Tottenham and the home crowd used the opener as a catalyst to surge at the visitors, with Kane and Son combining well to hold possession and get Liverpool’s defence turned.

But it was from a more industrial piece of play that the pair produced a second strike.

Lovren misjudged Hugo Lloris’ throw out and was immediately punished, Kane scampering into the space left by the error and waiting for the right time to send an unmissable gift across the area for Son to score.

The Spurs No.7 clattered another effort off the crossbar when picked out by Christian Eriksen, but at the midway point of the half Salah helped take the sting out of a chastening period.

The home side were aggrieved as Kane lost possession around halfway and Henderson took advantage of the referee’s decision not to award a foul.

A deflection on the captain’s forward pass was fortunate but Salah was first to the ball off the flank and did the rest – retaining his balance to swipe a right-footer across Lloris and inside the far post.

Alex Oxlade-Chamberlain was sent on for Lovren as Klopp reshuffled his system and Liverpool began to bring balance to the contest, with Salah’s pace a constant threat.

But Tottenham restored their two-goal lead with the final action of the first half.

Matip could only clear Eriksen’s free-kick from the left to Alli at the edge of the area and the England international lethally sent the ball back into the bottom corner on the volley.

The tempo of the tie dropped in the opening stages of the second half but any remaining ambitions the Reds held regarding a turnaround were ruined on 56 minutes.

Mignolet’s attempt to punch away a free-kick from the right only teed up Jan Vertonghen for a low blast that was blocked on the goalline by Roberto Firmino.

The danger had still not passed, though, and the Brazilian’s clearance was seized upon by Kane with a touch and shot between the bodies to establish a lead of three.

Philippe Coutinho went closest to reducing Liverpool’s arrears with a left-footer from 20 yards that Lloris scooped up and onto the woodwork while Salah drew a save from the Frenchman’s boot late on, but it finished as an afternoon to forget.