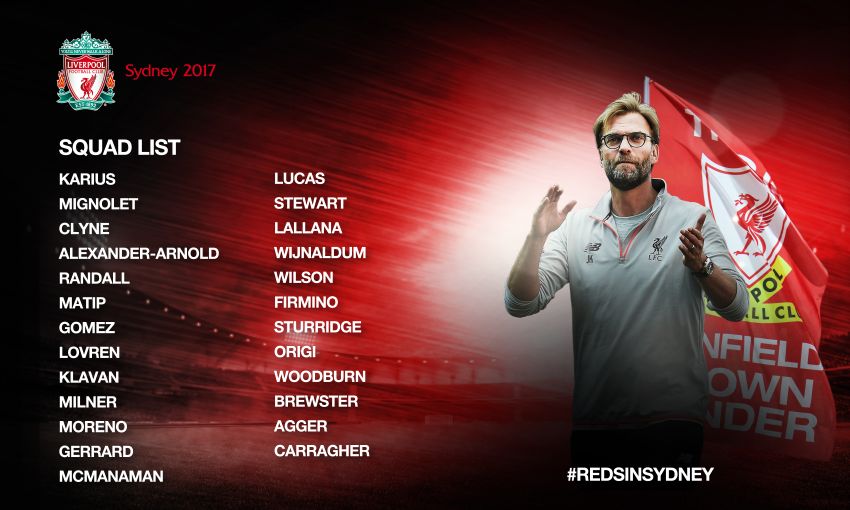 Liverpool FC have confirmed a 25-man travelling squad for the post-season friendly with Sydney FC at ANZ Stadium on Wednesday.

All but three of the squad selected for Sunday’s final Premier League game of the campaign are set to travel on Monday night, having secured a top-four finish with the 3-0 win over Middlesbrough at Anfield.

Tickets for the game are available here.

Fans outside Australia and New Zealand can watch the match live - click here to find out more.

Reds captain Jordan Henderson will not make the journey, as he continues to recover from a foot injury and targets a successful return in time for pre-season.

“I’m definitely going in the right way. I feel probably the best I’ve felt throughout my injury so far,” he told Liverpoolfc.com.

“It’s a little bit too late now the season has finished, but I’ve got all summer to get back to where I want to be. So come pre-season, I should be OK.”

Emre Can and Philippe Coutinho have been left out of the squad due to forthcoming international commitments – at the Confederations Cup in Russia and with Brazil in Melbourne respectively.

Dancing and the didgeridoo: An afternoon with Klopp in Sydney...

Reds Down Under: Koalas, Sydney Harbour, Bondi Beach and more