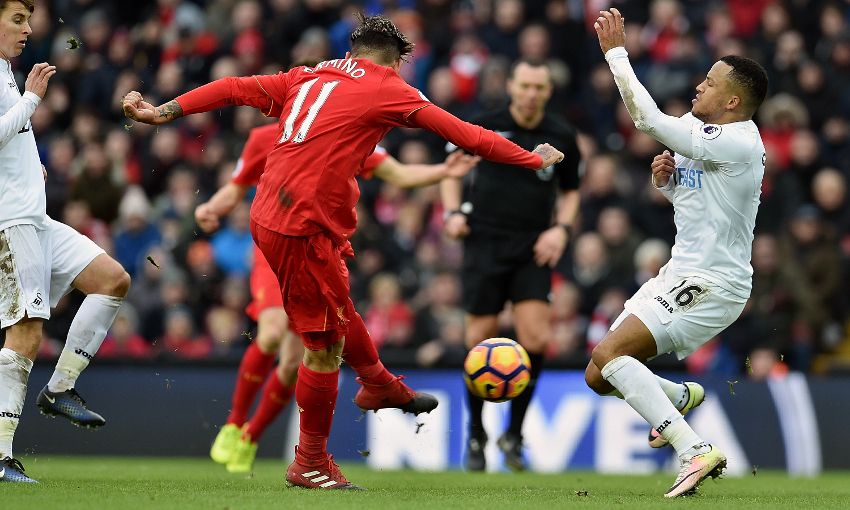 Liverpool suffered their first home Premier League defeat in over a year as Swansea City claimed a 3-2 victory at Anfield on Saturday.

After a goalless first half of few chances, the game came to life in the second period when Fernando Llorente gave the visitors a shock two-goal lead by netting from their first two opportunities - a poke home from a corner and a thunderous header.

The Reds fought back, with Roberto Firmino heading in before producing a marvellous finish on his left foot to seemingly set up a grandstand finale for Jürgen Klopp's team.

But the points instead went to the Swans, as they poached another goal on the counter through Gylfi Sigurdsson to boost their hopes of Premier League survival.

With Philippe Coutinho having proved his fitness in the midweek win over Plymouth Argyle, the No.10 was restored to the league starting XI in attack.

Nathaniel Clyne also made his comeback after injury, taking the place of the youngster who had proved an able deputy in Trent Alexander-Arnold.

Liverpool wasted little time in settling into their customary domination at Anfield, with Emre Can the recipient of the game's first big chance after just nine minutes.

But, after the German headed a Jordan Henderson cross wide and Adam Lallana sent a bicycle kick over the bar from close range, the visitors began to warm to their task.

The Reds had all the possession but, when the Swans managed a rare foray forward, they almost opened the scoring as Tom Carroll's low cross deflected onto the post.

Despite ending the half having boasted 72 per cent of the possession, the hosts failed to trouble goalkeeper Lukasz Fabianski.

A deflected Firmino shot and a header that looped wide from the Brazilian were the closest Klopp's men came before the break.

The manager's half-time talk no doubt consisted of ways in which his team could break down an obstinate opponent, and that need became even greater just two minutes into the second period.

The Reds failed to properly clear a corner and, when the ball dropped to Llorente in space, he poked the ball home to send the travelling supporters wild.

Things went from bad to worse moments later as the Spaniard leapt highest to power home a left-wing cross in impressive fashion.

But this Liverpool team has proved its resilience time and time again - and it was about to come to the fore once more.

Almost straight from the kick-off, Firmino produced a fine header from James Milner's cross to reduce the arrears.

And the No.11 produced another moment of brilliance with 20 minutes remaining, bringing a Georginio Wijnaldum ball down before swivelling to finish on his left foot.

The hosts' comeback made it seem like there would be only one winner, but the Swans hit back again as Sigurdsson finished off a quick counter after some hesitant defending.

Klopp's men continued to pour forward as they sought to claim at least a point late on but a Lallana header off the bar after good work from Daniel Sturridge was the best they could muster in the closing stages.