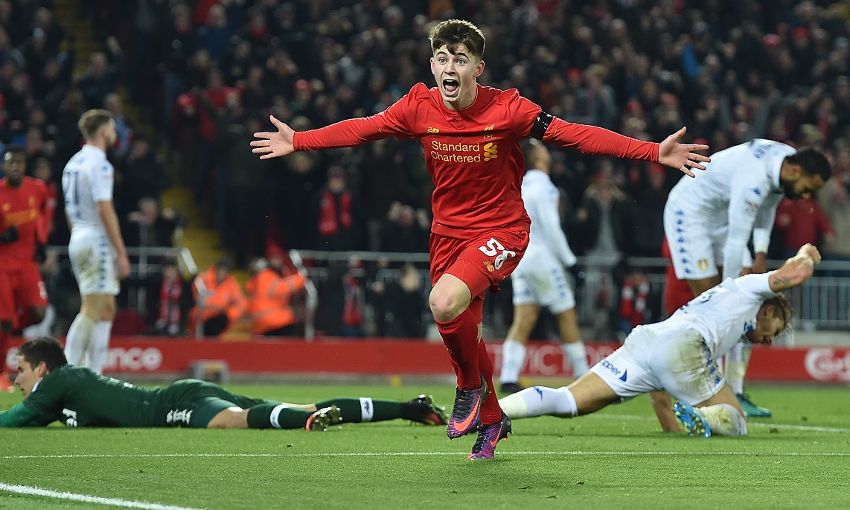 Ben Woodburn became the youngest ever goalscorer in the club’s history as he netted a first ever senior strike to help Liverpool into the semi-finals of the EFL Cup with a hard-fought 2-0 win over Leeds United at Anfield on Tuesday night.

The 17-year-old pounced shortly after coming on a substitute on only his second ever competitive appearance for the Reds first team, turning home Georginio Wijnaldum’s pass from close range.

In a difficult contest against a spirited Leeds side, Divock Origi had opened the scoring moments earlier, sliding in to convert a wonderfully-weighted Trent Alexander-Arnold centre at the near post with 14 minutes remaining.

And it was Woodburn’s historic effort that ensured Jürgen Klopp’s side reached the last four of the tournament for a third successive season, and in doing so he surpassed Michael Owen’s scoring record that had stood since 1997.

Liverpool’s teamsheet confirmed eight changes from the side deployed against Sunderland on Saturday, with only Emre Can, Wijnaldum and Sadio Mane retaining their berths.

It meant starts for the likes of Alexander-Arnold and Ovie Ejaria, while Woodburn was again named on the bench.

Prior to kick-off, the teams and supporters inside the stadium observed a minute’s silence as a mark of respect following the tragic plane crash in Colombia on Tuesday morning. 75 people lost their lives, including players and officials of Brazilian football club Chapecoense.

Once the action got underway, Leeds threatened to take a third-minute lead when Hadi Sacko was judged onside as he got behind the Liverpool defence, but Simon Mignolet made a sprawling stop to thwart the attacker.

Kemar Roofe’s stinging drive from range then warmed the palms of the Reds’ goalkeeper, before Wijnaldum was denied by a flying save from Marco Silvestri after side-footing Ejaria’s low delivery goalwards in an entertaining start at Anfield.

Then, on 33 minutes, the hosts went agonisingly close to taking the lead when Can stole in between Kyle Bartley and Silvestri to reach a wayward back pass from Kalvin Phillips before toe-poking inches wide.

Nevertheless, Leeds were proving tough to open up and the conclusion of the opening half was reached without a mark on the scoresheet.

Just as they did in the first, Leeds almost made a dream start to the second period – but this time they were denied by the woodwork.

Kevin Stewart was dispossessed on the edge of his own area, allowing Roofe to curl goalwards. The ball arched over Mignolet, but thumped against the top of the upright and to safety.

At the other end, Liverpool were fashioning half-chances with first Origi and then Can both being unable to make clean contact on openings inside the area.

Bartley then glanced a header wide of the far post from a corner and Roofe forced Mignolet into a low save with a drive across goal as the Yorkshire side threatened again.

On 67 minutes, Klopp elected to make his first change of the night as Woodburn replaced Stewart, who had failed to recover from an earlier knock.

Soon after, the Reds fashioned their best chance of the night when Mane sent Wijnaldum scampering into space inside the area. The Holland midfielder beat Silvestri by rolling the ball across goal, but watched on as it cannoned against the base of the post.

The rebound was worked to Woodburn, but Bartley flung himself at the ball to thwart the youngster’s attempt.

But Liverpool did make a breakthrough with 14 minutes remaining – with Origi the man once again ending the resistance of a visiting team in front of the Kop.

This time, the Belgium striker darted between Luke Ayling and Silvestri to nudge home Alexander-Arnold’s wonderful deep cross on the slide.

And within minutes it was 2-0 as history was made at Anfield and a place in the final four all but secured.

Collecting Wijnaldum’s lay-off on the edge of the six-yard box, Woodburn made no mistake as he slammed the ball into the roof of the net to etch his name into club folklore and send Liverpool into the semi-finals.

Inside Anfield: Unseen footage as Reds put six past Leeds

Match report: Liverpool hit Leeds for six to close the gap at the top of the table