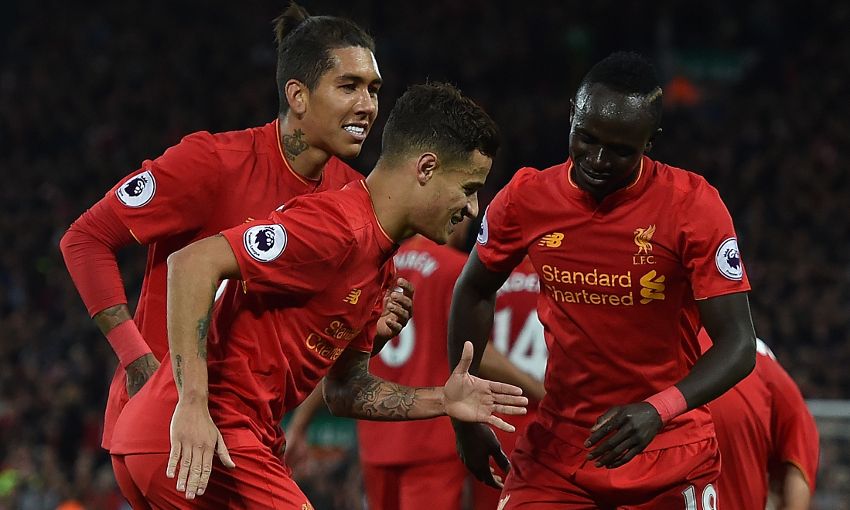 Sadio Mane has been the main supporting act for goal celebrations involving Roberto Firmino and Philippe Coutinho in recent weeks, but the Senegal international has revealed he is ready to take centre stage the next time he finds the back of the net.

The 24-year-old has joined the Brazilian duo in sparking joyous scenes following successful efforts against Swansea City and, most recently, West Bromwich Albion.

Firmino explained to Liverpoolfc.com earlier this month how the trio had planned their light-hearted routines, highlighting the revelry as a demonstration of the camaraderie within the squad.

Now, Mane has admitted he’s got something up his sleeve for the next time he converts.

He explained: “It’s something we have practised for fun sometimes before the games.

“Against West Brom, it was a new Brazilian dance and Coutinho and Firmino tried to teach me it. I think I know now how to dance it and I love it! We enjoyed doing it after the goal.

“The main teacher was Firmino – he taught me all the moves and everything.

“I hope next time it is my [celebration] because I am also trying to teach them a celebration, and after I score next time, they are going to dance it.

“It’s a Senegalese dance, but it’s a secret at the moment. After my next goal, you’re going to see it!”

More serious and indeed more significant matters for Mane and co come in the form of a trip to Crystal Palace this evening in the latest round of Premier League fixtures.

“We have an important game at the weekend,” he said. “We’re taking things game by game, trying to win and we’re going to continue like that until the end of the season. That’s the most important thing at the moment.

“They are a good team and we have to respect them because they have great players. It won’t be easy, but we’ll give our best for the club to try to win the game.”

Mane will be aiming to continue his excellent start to life at Liverpool, which has seen him net four goals and claim four assists in nine games so far.

“It’s very important for footballers, especially when you’re new, to start well because it gives you confidence and it makes everything easier,” said the No.19.

“My teammates have made me [start well] because the quality of the team is unbelievable, so I am happy for that and I want to thank everyone, especially the coach because he has helped me a lot.

“It’s good [here]. I like the city, there are very nice people here and my teammates and coach, too. I love to be a part of Liverpool Football Club and I’m enjoying it.”