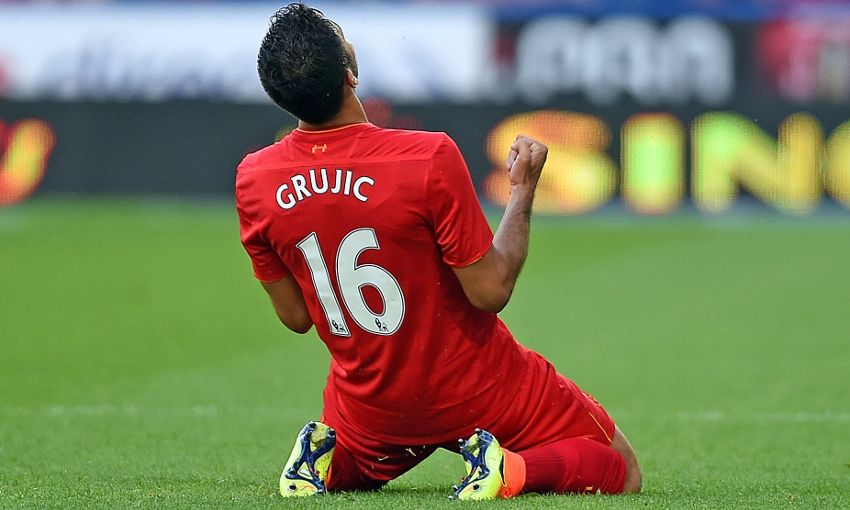 Huddersfield 0-2 Liverpool - as it happened

Marko Grujic’s second goal of pre-season and a late penalty from Alberto Moreno ensured Liverpool head to the USA on the back of a 2-0 victory at Huddersfield Town.

Jürgen Klopp and his players travel to America in the early hours of Thursday to continue their preparations for the 2016-17 campaign, and a crisp left-footed strike from Grujic shortly after the half-hour mark, along with Moreno’s spot-kick, was enough to send them on their way with a fourth consecutive domestic friendly win.

Just as he did in his debut at Fleetwood Town last week, the Reds’ new No.16 impressed at the heart of the midfield in the first half and capped his performance with another goal.

Philippe Coutinho could have doubled Liverpool’s lead soon after the opener, but the Brazilian saw his penalty saved after the lively Sadio Mane had been brought down in the area by Huddersfield goalkeeper Joel Coleman.

The second half was devoid of any real goalmouth action at either end until Moreno converted from 12 yards after Ryan Kent had been fouled in the 90th minute, but an apparent hamstring injury suffered by Lucas Leiva on the hour will concern Klopp.

Huddersfield had the first two notable attempts on goal when Joe Lolley and Rajiv van La Parra fired wide from distance, but the Reds almost took the lead when a free-flowing move involving Coutinho and Grujic ended with Mane cutting in from the right and firing into the side-netting.

Mane then had the ball in the net in the 18th minute when he pounced on a defensive mix-up to slide home, only for the referee to spare the blushes of home keeper Coleman by awarding a free-kick.

Loris Karius was called into action for the first time soon after when he palmed Lolley’s shot away, and Grujic put Klopp’s side ahead soon after.

Mane surged through the centre and fed Firmino down the right before the Brazilian stood up a cross to the Serbian, who took a touch before finishing coolly with a powerful half-volley.

Liverpool had the perfect opportunity to go two up two minutes later when Mane burst clear and skipped around Coleman before being fouled for a blatant penalty.

However, Coleman made amends by saving Coutinho’s spot-kick down to his right.

Klopp made six changes at half-time, with Danny Ings, Lazar Markovic and Ben Woodburn among those introduced, and the manager was forced into another substitution when Lucas pulled up.

But having already used all of his outfield replacements, Klopp had no choice but to turn to U18s goalkeeper Shamal George - who stationed himself as Liverpool’s lone frontman.

The Reds held on to a fourth-straight clean sheet in relative comfort, with Moreno adding their second goal late on.