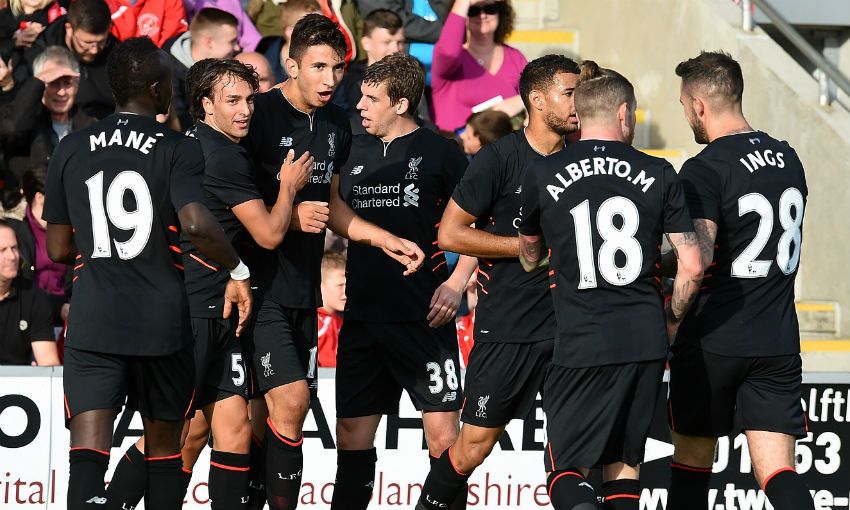 Marko Grujic reflected on his goalscoring debut for Liverpool by saying: "My dreams have come true."

The Serbian midfielder made his Reds bow in Wednesday's 5-0 pre-season friendly victory over Fleetwood Town, and it took him just 18 minutes to mark the occasion with a goal.

Second-half strikes from teenager Ben Woodburn and Lucas Leiva, along with a Roberto Firmino brace, ensured the final scoreline reflected Liverpool's total dominance, but it was their new No.16 who really caught the eye with an outstanding 45-minute display before Jürgen Klopp made 11 changes at the break.

When asked after the game to sum up his emotions, Grujic told Liverpoolfc.com: "The game was incredible.

"I'm so proud of my team and my teammates to give me the chance to play for this club and in my first game I scored - my dreams have come true and I feel very happy and proud.

"When I came here I only wanted to be with these guys, these 20 players, and now the coach gave me the chance to play in the first XI and to score, and I'm so happy."

Grujic has had six months to prepare for his move to Anfield after the club agreed a deal to sign him from Red Star Belgrade in January, and the 20-year-old is already feeling at home on Merseyside.

"Everything from the start has been perfect," he added.

"The players are very friendly, I'm spending a bit of time with Lazar [Markovic] and Dejan [Lovren] - they have helped me so much, and I am so happy."

The comprehensive win at Fleetwood means the Reds have scored six times without reply in their first two pre-season friendlies, but Grujic expects tougher challenges to lie ahead before the start of the Premier League campaign.

"In the next games we will try to get better and better. Then we will go to the USA and play against some of the best teams," he continued.

"Then we come back and play against Barcelona, which will be a good test for us and we will start the season ready."

Next up for the Reds is a trip to Wigan Athletic and you can watch every kick of every game in pre-season with LFCTV and LFCTV GO - click here for more details and to join now.