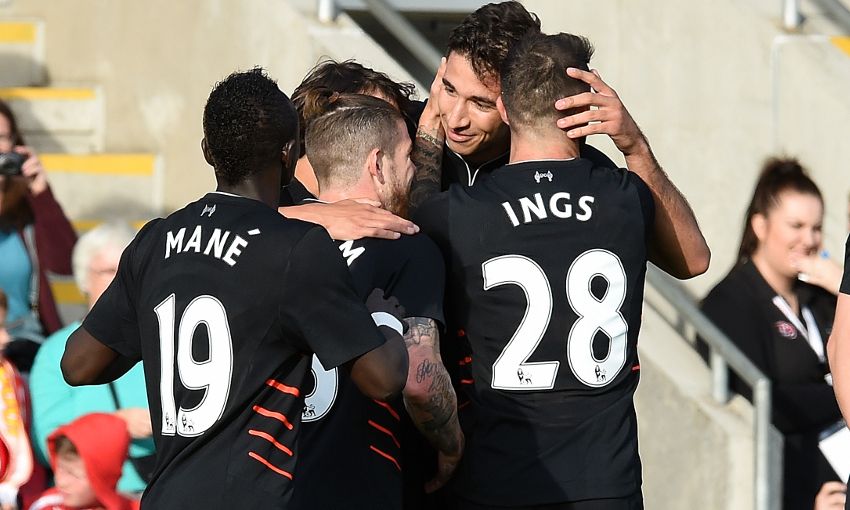 Marko Grujic marked his Liverpool debut with a goal as the Reds continued their pre-season preparations with a comprehensive 5-0 victory at Fleetwood Town.

Jürgen Klopp included Grujic in his starting line-up at Highbury Stadium and was rewarded with an assured and energetic display from the young Serb, who first won a penalty that Danny Ings missed and then put the visitors in front all inside the opening 18 minutes.

As was the case in last week's win at Tranmere Rovers, Klopp made wholesale changes at half-time but that made no difference to the complete dominance enjoyed by Liverpool, who doubled their lead seven minutes after the restart courtesy of teenage forward Ben Woodburn.

Lucas Leiva and Roberto Firmino then added goals three and four midway through the second half before Klopp's team - showing a clinical edge that was missing at Prenton Park - got a fifth in injury time when the impressive Woodburn squared to Firmino.

Liverpool started as they meant to go on by having a near-monopoly on the ball early on, and Grujic offered the first glimpse of his power and skill to win a penalty in the 12th minute.

The Reds' No.16 shrugged off the attentions of Jimmy Ryan before jinking past Akil Wright with a clever stepover in the area. Wright then tripped Grujic, leaving referee Kevin Friend with no choice but to point to the spot, but Ings saw his effort saved by Chris Neal.

However, just six minutes later, Grujic opened the scoring himself. All of Liverpool's best attacking work was coming down the left, and the 20-year-old finished coolly after the overlapping Alberto Moreno had been fed by the ever-dangerous Sadio Mane.

Fleetwood were finding it impossible to contain the buoyant Grujic, and the midfielder rattled the outside of Neal's near post with a cross-cum-shot before forcing the goalkeeper to palm away his low drive from 20 yards.

Despite the 11 changes made by Klopp at half-time, the Reds picked up where they left off after the break and Woodburn made it 2-0 when he slotted home Ryan Kent's low cross at the back post.

Liverpool were rampant, with Fleetwood's substitute goalkeeper Alex Cairns denying Kent and Woodburn in quick succession before the pressure told again when Lucas started and finished a flowing move also involving Firmino and Kent in the 69th minute.

Barely 60 seconds had passed before Firmino got in on the act by sidefooting home after Cairns had foiled Woodburn again.

Firmino then rounded off a comfortable evening when he tapped home after more good work from Woodburn.