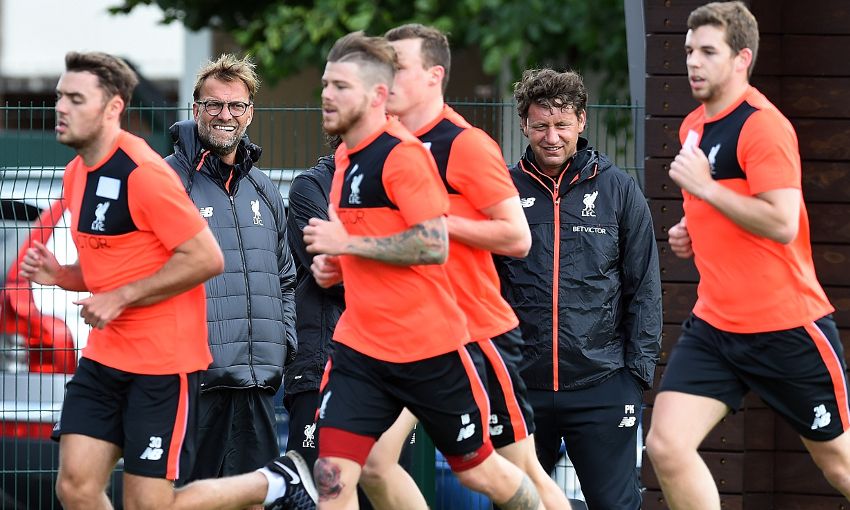 Carefully designed plans for the pre-season programme at Melwood will help to ensure the Liverpool squad is 'on a good way' for 2016-17, according to Andreas Kornmayer.

The players returned to duty last weekend and are already hard at work ahead of their opening friendly – a meeting with Tranmere Rovers this Friday that will be live on LFCTV and LFCTV GO.

That game is the first of nine before the competitive action begins in August, with tough tests against the likes of Chelsea, AC Milan, Roma and Barcelona ahead, and you can watch every single kick with us.

A new face is involved in maximising fitness levels this summer, with Kornmayer a recent addition to Jürgen Klopp’s backroom team.

And as the Reds entered a full week of training, he explained the methods in place to get the most out of them – with and without the ball.

Kornmayer told Liverpoolfc.com at Melwood: “In the first sessions it’s important that they get a feeling for the ball again and to get a handling with the ball.

“[The plans are] not only designed by me. We – the coaching staff – design them.

“We have some topics to put in, some strong topics in my opinion; some endurance topics, of course. And we will mix it with football and then we are on a good way.

“First of all, I have to get to know the players. Check everybody and see where we are. Then we can work with them, do the programmes and progress for everybody, the whole squad.”

With the German’s focus concentrated on his responsibilities at the training ground, Kornmayer has had limited opportunity to take in his new environment on Merseyside.

But he has already seen enough to be excited by what lies ahead for himself and the club.

He said: “I was looking forward to being here and working here. For me, it is a brilliant thing to get this chance here. The first days were really great.

“I have a good feeling. [Travelling] from the apartment to Melwood, it all looks great and I’m really happy to be here.”

Kornmayer’s journey to Liverpool began with a phone call from Klopp – and the manager’s words left his new recruit in no doubt about the next step in his career.

In fact, it was an almost instantaneous decision.

“[Klopp] was my first contact. He called me and asked me; we talked about everything,” he said.

“To be honest, I didn’t have to think about it for too long. I was really impressed with what he said to me and impressed that the club wants to have me. I’m happy.”