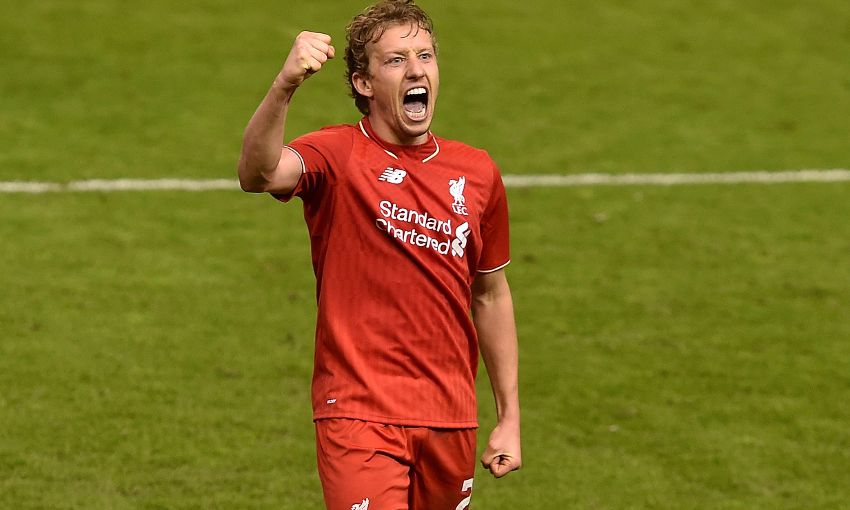 From a 'strange debut' at Goodison Park to watching the nervous excitement of Jamie Carragher and Steven Gerrard each time they faced Everton, Lucas Leiva has come to know as much as anyone about Merseyside derbies.

Born in Brazil but now an adopted Scouser of nine years’ service, the Liverpool midfielder believes the time spent in and around the city since his first clash with the Blues in 2007 has taught him the importance of the match.

“You understand more, you have people from the city around you, which makes you think a lot more about the game and the emotions,” he told Liverpoolfc.com.

“I remember very clearly Stevie and Carra on the day of the game – they couldn’t stand still for five seconds because they were so excited for the game. It’s good, that feeling.

“Of course you have to control the emotion and try to approach it as a normal game because it’s another three points like all the games we have played during the Premier League season. But we know that if you win the feeling would be special.”

Lucas knows the feeling because he enjoyed it at the end of his very first meeting with the team a stone’s throw away from the Reds on the other side of Stanley Park.

His lack of understanding of the rivalry’s magnitude was perhaps a positive at that stage, allowing the No.21 to find his place amid the frantic scenes typical of every Merseyside derby.

“It was a strange debut,” the 29-year-old recalled. “I think it was a good game for me to come on, because I wasn’t aware of the size of the game.

“I came on for Stevie with 20 minutes to go and I was very unfortunate not to score. But in the end we got the penalty and won the game.

“It’s still very fresh in my mind and it’s a very good feeling. Of course I have had many more derbies, but hopefully it will be another one tonight.”

Liverpool enter the 226th clash against their neighbours – Jürgen Klopp’s first since taking charge last October – in their most consistent form of the campaign and with three successive wins under their belt.

Barclays Premier League victories over Stoke City and Bournemouth sandwiched one of Anfield’s greatest nights in modern times, the 4-3 comeback to eliminate Borussia Dortmund and reach the Europa League semi-finals.

Lucas would like it to be an occasion to match last Thursday’s when these city rivals do battle this evening, though a positive result without quite so much drama is his outcome of choice.

He said: “We hope it will be a similar atmosphere but not a similar game, I would say. We don’t need many games like that during the season!

“The fans can’t wait to see us again and we can’t wait to play at Anfield, especially after that win and even more now with a derby game.

“It’s all positive and we are on a good run, so hopefully we get another three points, which would be important. We would be closer to the other teams up the table.

“As the manager has said to us, we still have 18 points to play for and we should focus on getting all of them if we can.

“We are in a good moment, and Everton are in the FA Cup semi-finals so they will come with a lot of confidence even though their position in the Premier League table is not the best for them at the moment. They have all the factors to be positive.

“It’s going to be another hard game, a difficult game. But I think playing at Anfield, especially with the atmosphere that is being created as the season goes on, it’s all positive for us to get a win.”

Klopp made 10 changes to his starting XI for Sunday’s trip to Bournemouth, where the Reds secured three points through first-half goals from Roberto Firmino and Daniel Sturridge.

Lucas captained a youthful side on the south coast and the Brazilian credited the harmonious mood among the squad to the way the manager has provided opportunities to every player.

“We have a very good dressing room and a very good atmosphere around the place,” he added. “Of course, with wins and performances it’s always positive, people start to be more relaxed.

“It has been very good and very positive in the last couple of weeks – almost everyone in the squad has had a chance to play. It’s good because everyone feels part of the team, and it also showed how strong our squad is.

“We made a lot of changes against Bournemouth and Stoke and we managed to get two wins. We had a very good game against Dortmund. It’s all positive at the moment.

“There is still a lot to play for. We still have eight games left – hopefully nine – in a very short period of time. We just need to push on, give the last energy we have for the few more weeks we have and hopefully finish the season on a high.”