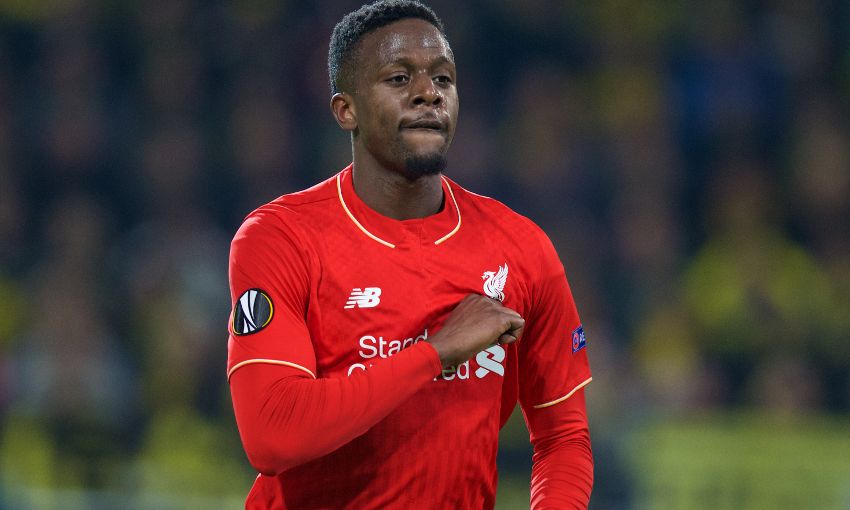 With another famous European spectacle at Anfield set to take place tonight, Divock Origi has revealed these are exactly the sort of occasions which made him put pen to paper on a move to Liverpool.

The striker joined from Lille in the summer of 2014 before being sent back to the French outfit on loan for the following campaign.

Now in his first season with the Reds, the 20-year-old has found his feet in Jürgen Klopp's side by going on to score some crucial goals in big moments

Perhaps none have been more important than his strike at Signal Iduna Park last week, to give Liverpool an away goal against Borussia Dortmund in the first leg of the Europa League quarter-final tie.

And heading into the return fixture this evening, all is well on Merseyside for the Belgium international.

"To play a game like this is the reason I came here,” Origi said.

“This is a big club and we want to win prizes. I just try to prepare as well as possible and then the coach has to make the choices.

“I was very happy to get game time in the first leg and I just wanted to do my best. When someone shows confidence in you, you want to reward it. I am just glad everything went okay.

“Afterwards the manager just said ‘well done’. He knows I have a long way to go. I know that too so I just try to enjoy the moments when I score and help the team. I know I have to improve certain aspects to be more consistent and that is what I am trying to do.

“I am enjoying my football. I feel I am playing well and scoring goals, which is important for a striker. I feel fit and I feel that I am expressing myself better on the field. I am working hard in training and enjoying games.

“I feel good at the club and it is a combination of all these things that is making me perform well on the pitch. But I also know that people have to see my full potential. You have to make steps to go there.”

At the beginning of this time at the club, Origi struggled to make the impact he hoped he would.

However, with belief installed by Klopp and time invested at the training ground to build on his physique, the forward has excelled in recent months and scored three goals in his last two appearances.

"When you come to the Premier League, you realise you have to be physically strong because it is a very intensive league,” Origi added.

“I have been trying to work on this. It was a surprise because it’s very fast and physical. You have a lot of big players in every team and it is different to other leagues, where you maybe have three or four very good teams. Here there are very good teams everywhere and a lot of big competitions so you have to be ready.

“I only have small experience in the first team. Coming here, seeing how the big players handled it and worked, it inspired me. I have made steps because I was young and now I am starting to see the difference.

“We have a good fitness team here so I try to do every day something on my core or my muscle strength. I think I have seen some improvements and I am happy that seems to be the case.

“It is always nice that people believe in you but you have to prove it on the pitch. If you are good, the manager will see it and he will use you as he knows. Then you don’t have to ask too many questions.

“At this age, you learn a lot tactically. To be able to work with the manager is great as he knows exactly what he is doing. He has a clear plan. It is very easy to try and suit his system.

“Before I came to the club, I played more with my back to the goal. My qualities are more when I move around and go one-on-one to use my speed. I have seen big improvements.

“We all know the qualities of the boss and we all know the history of the club of bringing up young players. I think I am at the right place and it’s just depends on me how I put in the work."

Kopites have been purring at the thought of a striking partnership between Origi and Daniel Sturridge, having seen a promising glimpse of the two upfront together in the win over Stoke City.

As well as the duo providing wonderful entertainment for supporters, according to Origi, the experience of playing with Sturridge helps him develop on the pitch.

“He’s a big player so when I play with him I see a lot of things I can put in my game, as well as with Christian [Benteke], Danny [Ings] and even the young players,” the No.27 added.

“I try to see how Daniel moves. He moves very smart, he comes between the lines and he finishes very well. He is creative so he has a lot of qualities and talent. He became a big player so that’s my aim, to make the same progress like him.”