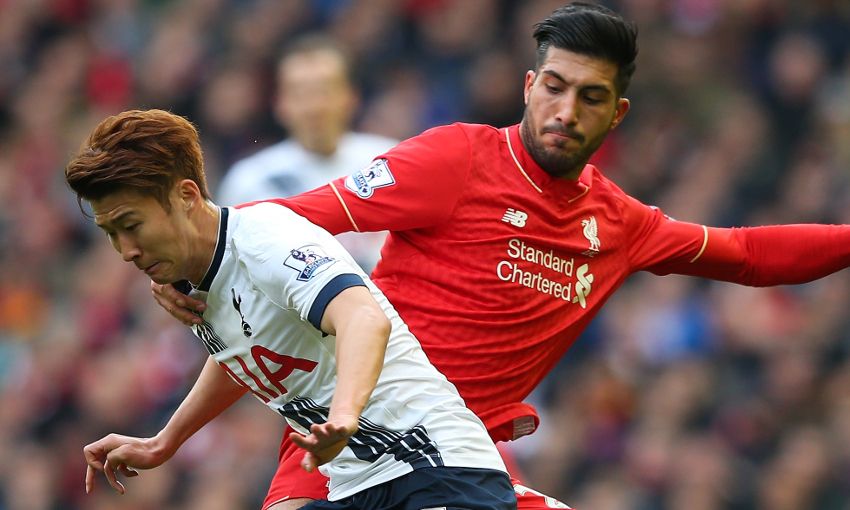 Liverpool resumed their Barclays Premier League campaign with an entertaining 1-1 draw against Tottenham Hotspur at Anfield on Saturday evening.

Philippe Coutinho opened the scoring early in the second half with a brilliantly-taken 10th goal of the season, but it was quickly cancelled out by an equally clinical Harry Kane finish.

Neither side were willing to settle for a point in the closing stages but there were no further additions to the scoresheet and it ended all square.

Jürgen Klopp made three changes to his starting line-up for the 50th game of the season, with Jordan Henderson, James Milner and Alberto Moreno brought back into the XI for Joe Allen, Jon Flanagan and Divock Origi.

Befitting their position as legitimate title contenders, the visitors quickly asserted themselves on the game and Christian Eriksen threatened on eight minutes with a strike from the edge of the area that was straight enough for Simon Mignolet to punch away.

Spurs’ confidence was evident in the high defensive line they were happy to hold but Adam Lallana’s persistence forged an opening for Milner 12 yards out, only for Kevin Wimmer to block at the crucial moment.

Hesitance in dealing with a ball forward caused a scare on the Kop when Mignolet’s eventual clearance clattered off Kane and up into the stand, while Hugo Lloris reacted rapidly to prevent Heung Min-Son from conceding an own goal as he cut out a cross from Moreno.

Kane side-footed wide having broken into space on the right and his visible frustration at the wasted opportunity was soon echoed at the other end by an England teammate wearing red.

Emre Can battled to win possession midway into Tottenham territory and Coutinho instinctively laid in an unmarked Daniel Sturridge, but the No.15’s first-time drive was too close to Lloris.

The chances kept coming for both teams before the break; Lallana was twice thwarted by good saves from the Spurs goalkeeper, either side of a vital Dejan Lovren intervention to deny Kane in the penalty box.

And it was much the same after the interval, with Dele Alli close to flicking a header more dangerously at goal from Kane’s inviting delivery towards the six-yard box.

It proved especially costly when the Reds found a way to beat Lloris in the 51st minute.

Coutinho was the man on target for Liverpool – for the third consecutive match – with a sublime side-foot finish around the reach of the ‘keeper and into the bottom right corner, having been teed up by Sturridge.

The pair almost combined in the reverse order to double the lead moments later but Sturridge headed just over from the Brazilian’s diagonal pass into the area, while Son was inches off target with a well-struck volley.

Kane made no mistake on 63 minutes, however. Eriksen was judged to have kept the ball in deep on the left and when it bounced for the Tottenham No.10 nearby, he swivelled and thumped an equaliser into the far corner.

Goals at either end merely heightened the frantic nature of the game and after Mignolet clawed out an Eriksen effort, only a subtle deflection prevented Coutinho’s cross-shot from the byline going in or reaching Mamadou Sakho.

Origi entered the action to provide fresh, fast legs late on and worked space for Coutinho to line up a shot with five minutes left, but it rolled narrowly wide and it was a point apiece at Anfield.