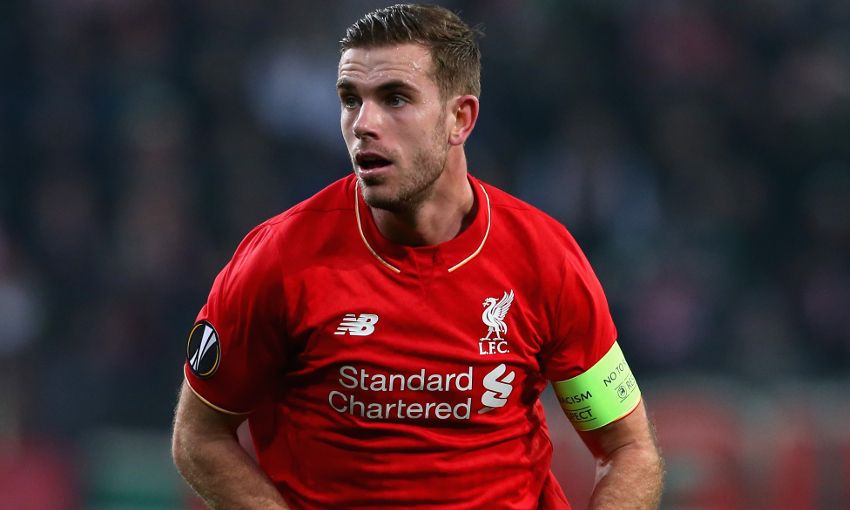 Liverpool captain Jordan Henderson could play the 300th game of his club career when the Reds host Manchester United in the first leg of their Europa League last-16 tie on Thursday night. Check out 14 more pre-match facts and figures courtesy of club statistician Ged Rea.

This will be the 195th meeting between the teams but the first in European competition. Liverpool have won 64 and United 79 with 51 drawn, while at Anfield, the Reds have recorded 43 victories to United's 26.

The last time Liverpool reached the last 16 of European competition was 2011 when they were beaten 1-0 on aggregate in this competition by Sporting Braga.

The Reds are one of seven teams left who have won this competition. Anderlecht and Shakhtar Donetsk, who face each other, and Tottenham, Sevilla, Bayer Leverkusen and Valencia all remain.

In the nine games on this ground against English teams Liverpool have scored nine times, with four coming in a single game against Arsenal in 2008.

Simon Mignolet is the only player to start all eight European games this season for the Reds, with Emre Can also featuring in them all.

Liverpool have lost one of the last 26 Anfield fixtures in this competition, winning 18 and drawing seven.

The last Liverpool player to score twice in a European game was Luis Suarez against Zenit St Petersburg in February 2013.

Liverpool have lost five of the last six meetings with United in all competitions, with their only win coming in the league at Old Trafford (3-0) in 2014.

United have faced English teams in five ties previously, nine matches in total, and have lost only once. That came in their first game, against Tottenham; however, they overturned a 2-0 first-leg deficit to go through in the Cup Winners Cup in 1963-64.

This season, after beating Bruges in a Champions League qualifier they proceeded to finish third with eight points in a group that consisted of Wolfsburg, PSV Eindhoven and CSKA Moscow.

They have won two of their last 12 away games in Europe under three managers - Alex Ferguson, David Moyes and Louis van Gaal.

The men from Old Trafford have lifted three European Cups, one Cup Winners Cup and a Super Cup.

Van Gaal has never been eliminated from Europe as a manager in the knockout stage by an English club. Twice he has knocked out English teams during his managerial career. He overcame Newcastle United with AZ Alkmaar in the 2006-07 Europa League Round of 16, and while at Bayern Munich he beat United in the Champions League quarter-finals in 2010.