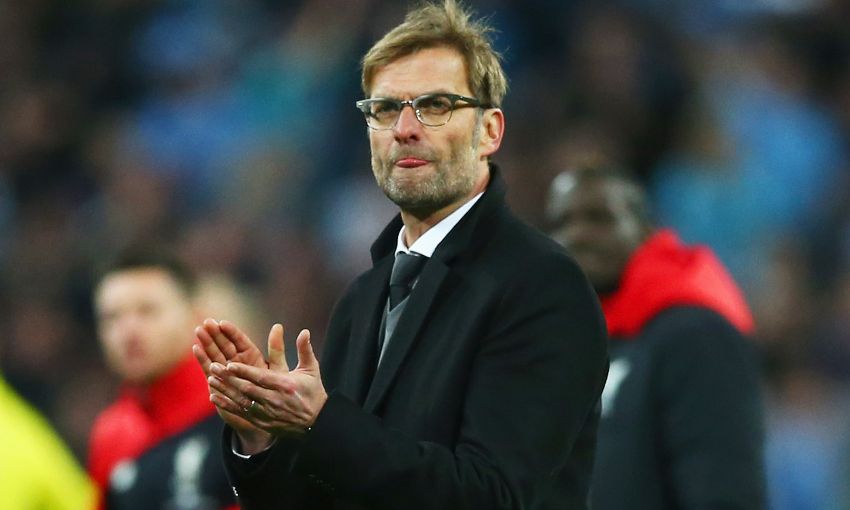 Jürgen Klopp insisted Liverpool will 'go on and get better' after his side were denied Capital One Cup glory by Manchester City on penalties at Wembley.

Fernandinho and Philippe Coutinho scored the goals in a thrilling 1-1 draw in the final, but the Reds were undone during the subsequent shootout.

The manager said: “[The overall emotion is] disappointment. It was a great day until the last shot in the penalty shootout.

“Perfect organisation, a perfect atmosphere and a really great experience, but in the end we lost the penalty shootout. It’s the last possibility to lose. We tried everything.

“I could be proud about a lot of things the players did today, but I expected we could do things like this so it’s not too easy to be proud of things you think are normal. But they did well in a lot of moments.

“They all really wanted this, as did all the people in the stadium – it was a great atmosphere. It was really perfect until the last kick.”

The manager continued: “We played a good first half, an open game against a strong side. There were moments for both sides, good offensive moments and good defending after the difficult situation of an early change in the game.

“In the second half, we conceded an early goal and were not too lucky. Then they had two counter-attacks with [Sergio] Aguero; that’s normal with their quality.

“We opened too early, to be honest, and we didn’t protect our own offensive actions too well. That’s why we changed. With these changes, we changed something in the game – we were really in the game, controlled the game, had good direction and stayed patient.

“You could see it was really more than possible that we could score the goal. We scored the goal and we could have scored the second one.

“Extra-time, we saw, is never the best time in the game because all the players have a few kilometres in their legs.

“Then you have the penalty shootout. You need a little bit of luck. Of course, we need to shoot a little bit better than we did. We know how it works but today it was not too difficult for the goalkeeper.

“We were not too lucky as Simon [Mignolet] was really close two or three times. That’s how it is and at the end, we have to accept we lost.”

The result quashed Liverpool’s hopes of lifting a trophy for the first time since 2012 and prevented Klopp from securing silverware within five months of his arrival.

His post-match assessment was typically honest, though lined with a determination that the Reds will recover from their disappointment and come back stronger.

“You have to feel a defeat,” said the German. “You cannot say ‘I don’t care, it’s not important’. It was important and we lost, so that feels not too good.

“You always have to strike back. We can say all of these things, but you know you can fall down and then you have to stand up. That’s the truth, but it’s completely normal – only silly idiots stay on the floor and wait for the next defeat.

“Of course we will strike back – 100 per cent. We struck back today in the game. But for this and the next time we are in a final, you have to feel how it is when you lose.

“Not everybody has to learn it like this – I won my first final. It’s really not the best moment, but that is all. Tomorrow morning we can change everything, but now we can change nothing. That’s the big difference.

“But don’t worry, we will go on, we will get better and that’s how it is. We have to go the hard way – that’s how it is. Nothing is easy in this moment, but we can see if we carry on working really hard then there is new light at the end of the tunnel.

“That’s really, really important and that’s what we know. We will stay in the race, there is no doubt about this – but tonight we feel rubbish.”

Klopp also provided an update on the condition of Mamadou Sakho, who had to be substituted during the first half following a clash of heads with teammate Emre Can.

The boss said: “I’m not too sure at this moment, but he looked better after the game. In the situation, we had to make the decision.

“Everybody understood and thought it was better to take him off. He was struggling in this moment and it was not too healthy. We have to see, it’s not a big problem.”