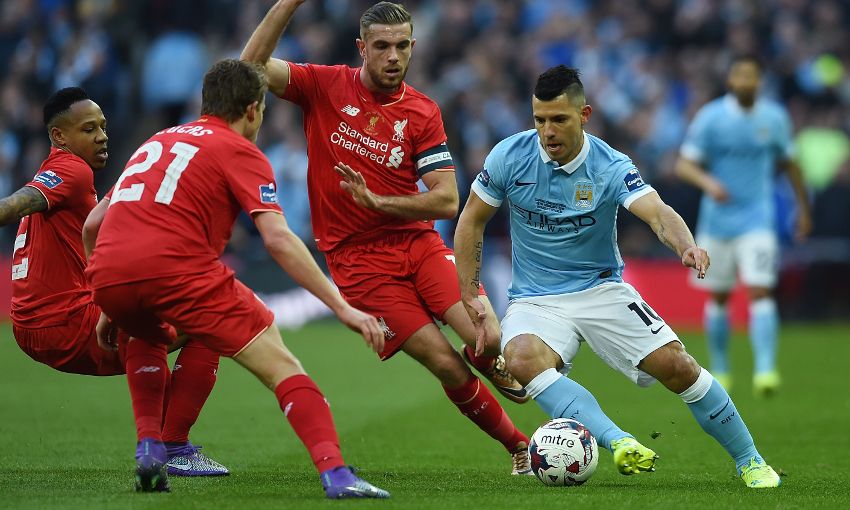 Liverpool suffered Capital One Cup final heartbreak as they were beaten on penalties by Manchester City at Wembley on Sunday.

Yaya Toure netted the decisive kick in the shootout after Willy Caballero kept out efforts from Lucas Leiva, Philippe Coutinho and Adam Lallana.

It came following a hard-fought 1-1 draw between the teams in London, in which both sides created chances to win it.

An even first half saw Sergio Aguero go closest when his low strike from the edge of the area was tipped onto the post by the outstretched glove of Simon Mignolet, while the Reds lost Mamadou Sakho to a head injury.

Liverpool fell behind in the early stages of the second period when Fernandinho’s strike from a tight angle arrowed underneath Mignolet’s dive to find the far corner.

Mignolet produced a magnificent reflex save to keep out Aguero, while Divock Origi was denied by Willy Caballero as both teams went in search of a winner in the additional period in vain.

And it was to be City celebrating after penalties as they secured a 3-1 success to deny the Reds a first trophy in four years.

The all-important team news confirmed Liverpool were unchanged from the side deployed from the start against FC Augsburg on Thursday night, meaning a place in central defence for Lucas Leiva.

Elsewhere, on the bench, the Reds were boosted by the returns to fitness of Lallana and Joe Allen.

Excitement was certainly high among the 30,000-plus Kopites at the national stadium as their side prepared to compete in their first final since 2012 aiming to lift the first piece of silverware of the Klopp era.

And inside the opening 30 seconds, Liverpool called Caballero into action as the City goalkeeper was forced to get down to thwart a low diagonal drive from Alberto Moreno after he’d been released into space by Daniel Sturridge’s pass.

Indeed, the Reds started much the stronger of the teams and fashioned a handful of openings in the early exchanges with James Milner seeing a shot from the edge of the area crash against the legs of a defender before Coutinho’s disguised ball almost put Nathaniel Clyne clean through.

But slowly, Manuel Pellegrini’s men began to ease their way into the contest and assert some pressure on the Liverpool defence – and on 23 minutes they were afforded a real let-off when Aguero evaded both Lucas and Sakho on the edge of the area, but thankfully Mignolet was able to push the eventual effort onto the base of the post.

It proved to be Sakho’s last action of the afternoon as he made way for Kolo Toure having failed to sufficiently recover from the effects of an earlier accidental clash of heads with Emre Can.

The substitute was inches away from making an astonishing impact soon after when he just missed Coutinho’s driven ball into the box from a free-kick on the left.

Then, in the last minute of the first period, the Reds fashioned an opportunity for Coutinho to strike a volley at Caballero’s goal from Can’s flick on, but the ball cannoned against Nicolas Otamendi to ensure the sides went in goalless after a tense opening half.

However, the Blues were to break the deadlock just four minutes after the re-start. Aguero supplied the pass to find Fernandinho’s overlapping surge into the area. The midfielder struck the ball first time across goal and it went through Mignolet’s attempted save to find the far corner.

The riposte from Klopp’s men was a positive one and a well-worked series of passes outside the opponents’ area resulted in Sturridge sliding a ball through for Milner, who arrowed off target at the near post under pressure from Caballero.

Nevertheless, City should have furthered their advantage on the hour mark, but after a speedy counter-attack saw David Silva tee up Raheem Sterling six yards out, he contrived to slide wide of the post.

Aguero wanted a penalty soon after when another break concluded with the Argentina forward going to ground under a challenge from Moreno, but referee Michael Oliver waved play on.

As the contest entered the final 20 minutes, Klopp introduced Lallana in place of Moreno, with Milner dropping back to the left side of defence.

With time ticking away, Liverpool carved out a half-chance for Milner in space inside the area, but his attempt to pick out a teammate was cut out, while at the other end, Sterling scuffed wide from Aguero’s pull-back.

Origi entered the action for Firmino as the Reds attempted to summon one final push – and they were finally rewarded with 83 minutes on the Wembley clock.

Sturridge flashed an effort across the box towards the back post, which Lallana thumped against the base of the post from point-blank range. Nevertheless, it fell for Coutinho, who showed incredible composure to slide it into the unguarded far corner of the net and level up the contest.

And there was to be an astonishing end to normal time as Fernando and Yaya Toure were thwarted by outstanding saves from Mignolet, while Henderson’s long-range drive was almost diverted beyond Caballero by Origi.

But there were to be no further goals, meaning extra-time was required in London.

And there continued to be little between the sides, but Aguero was once again left with his head in his hands after being denied by Mignolet when clean through in the final moment of the first half.

Meanwhile, Caballero pulled out an outstanding save of his own to keep out an Origi nod from six yards in the early moments of the second half of the additional 30.

With neither side able to muster a second, it was to be penalties that decided the fate of the 2016 Capital One Cup final.

And destiny was on the Manchester club’s side as Caballero foiled attempts from Lucas, Coutinho and Lallana before Toure converted the decisive kick to leave Liverpool suffering final heartache.