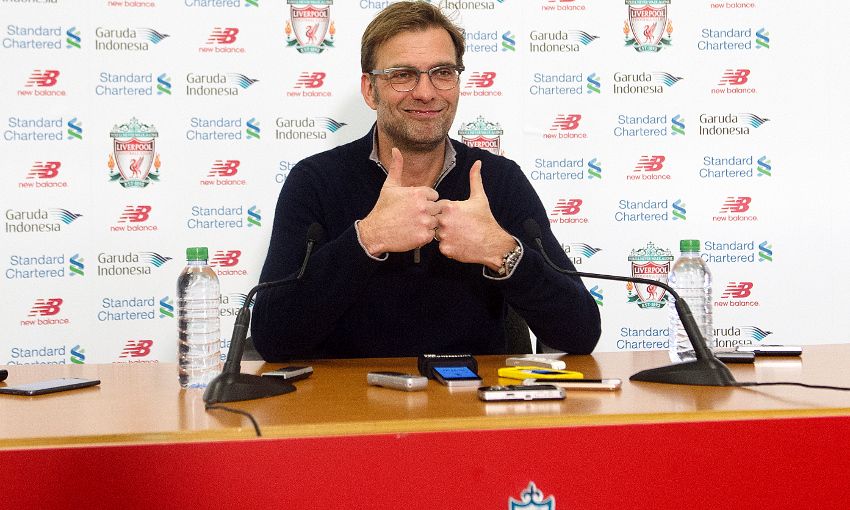 Jürgen Klopp offered his reaction to Liverpool being paired with Manchester United in the last 16 of the Europa League today - and revealed it was the tie he wanted.

Friday afternoon’s draw in Nyon will pit the old rivals together for the first time ever in continental competition, with the first leg set for Anfield on March 10 and the return at Old Trafford on March 17.

And Klopp explained when asked by members of his backroom team who he wanted to face in the next round of the tournament following the victory over FC Augsburg last night, he picked United.

Speaking at his Capital One Cup final press conference at Melwood, the boss said: “It’s great. We deserve these games, with the game yesterday.

“Obviously it is not easy, but you can ask my staff, when they asked me yesterday ‘who do you want?’ I said ‘Manchester United’.

“I think we have to clear something. We had a good game when I was here when we played against them, but we lost 1-0. It was not what we deserved on that day, but we got it.

“Life gives us the chance to make it better and that’s what we have to do, and what we’ll try.

“In this round, there were no easy games so we had no chance for an easy game. So we have Manchester United – cool!”

Enjoy some fantastic Anfield hospitality packages for the first leg of the United tie. Click here to find out more.