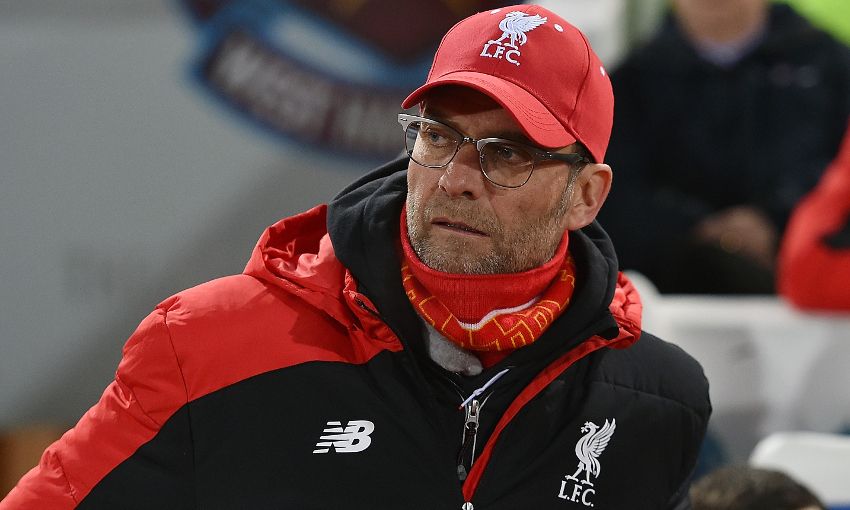 Jürgen Klopp insisted there were many positives to take from Liverpool's performance at West Ham United but admitted the 2-1 defeat in the FA Cup ensured his side head home full of disappointment.

The Reds recovered from Michail Antonio’s goal just before half-time to level the fourth-round replay through Philippe Coutinho’s excellent free-kick three minutes after the restart at the Boleyn Ground.

They forged a number of chances to take the lead during the remainder of the 90 minutes and into extra-time – instead, the Hammers secured the result when Angelo Ogbonna headed the winner just as a penalty shootout loomed.

In his post-match assessment, Klopp praised the individual efforts of the entire team – which again saw young players entrusted with the manager’s faith – but acknowledged the result was all-important.

He said: “I thought they could play like this so I’m not surprised. But the only reason we were here tonight was to win.

“We did a lot of things really well. But the first real chance was a goal for West Ham. Our goal was great, a high-quality goal of Phil Coutinho.

“We changed really offensively and still did well and created chances. It was a big fight. We couldn’t use our chances, they got a free-kick without a foul and we conceded a goal. Now we go home.

“We don’t have to talk about morale, we showed morale and everything is OK with these boys. If you go through the squad tonight, it’s a great game.

“Flanno was out for 18 months and played 120 minutes tonight – great. Tiago Ilori was at Aston Villa and not in the squad, not really a second-team player, and played really well tonight.

“Next to him, Lucas Leiva was not in his position and played really well. Brad Smith, four or five weeks ago he wasn’t at the club. The double-six [Pedro Chirivella and Kevin Stewart] are very young and were really good.

“But the only reason we were here was to go into the next round and so we are disappointed. That’s how it is.”

The frustration in east London followed on from the 2-2 draw with Sunderland in the Barclays Premier League on Saturday – a game played while Klopp was in hospital having his appendix removed.

But the boss has no intention of dwelling on the setbacks.

He continued: “We created chances, but we didn’t score goals – that’s the major mistake you can make in football. But it’s better to create chances and to miss than to not create chances.

“If you want, we can see positives. We are Liverpool FC and in this moment it’s not the sunniest side – a 2-0 lead [lost against Sunderland], manager in hospital, out of the FA Cup, but tomorrow when we get up, the sun will shine.

“If we want at Liverpool, all together, then we can take a lot of positive things out of this game and make the next step. We can rest a lot of players now because we will have the first matchday – I don’t know when it is – when we are not involved.

One obvious positive to take from the evening was the return to action of Daniel Sturridge, who was introduced on the hour to end his spell on the sidelines since December.

Asked whether the No.15 will be in contention for a start at Aston Villa on Sunday, Klopp said: “We have to talk first with Daniel, the doctor and all of the medical staff before I make a decision about this.

“The game was a little bit longer than I thought because I thought we could decide it after 90 minutes, but we didn’t so it was [another] 30 minutes plus. We will see.

“It was great [to have Sturridge back], everybody saw it. Divock Origi is back, Philippe Coutinho is back, so that’s good, but we need consistency in the line-up.”

Two great opportunities fell to Christian Benteke in extra-time but the Belgian dragged one wide and saw the other saved by West Ham goalkeeper Darren Randolph as he ran through one-on-one.

Klopp said: “Ask 80 to 90 per cent of all strikers in the world – high-quality, low-quality, no-quality – they will tell you they’ve had times like this.

“It’s like it is and you have to carry on. You have to go on, there’s no other situation. All the people in the world want the easy goal, but then the easy goal doesn’t help, so you have to play, you have to improve, you have to want to do all the things – that’s how it always is. It’s no different for Christian.