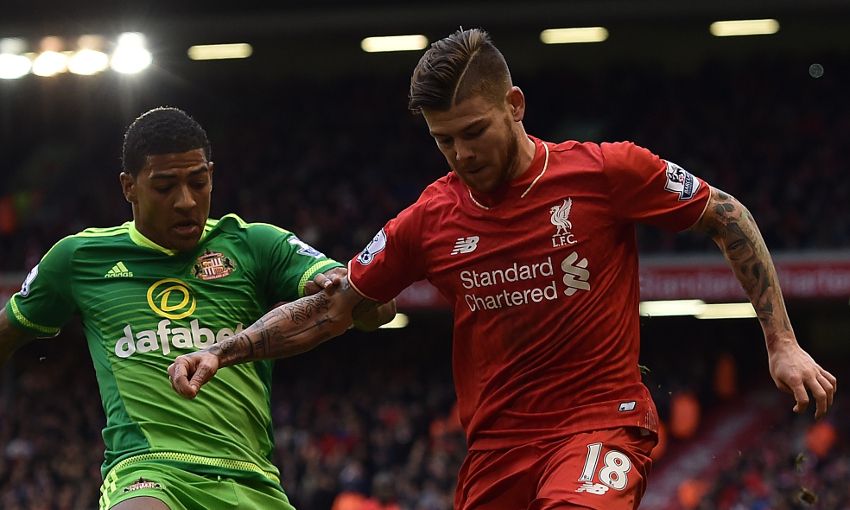 Liverpool were held to a 2-2 draw by Sunderland at Anfield on Saturday afternoon as the visitors fought back from two goals down to claim a point in the Barclays Premier League.

Roberto Firmino appeared to have helped the Reds take the victory, scoring a clinical header from James Milner’s assist and turning provider to hand Adam Lallana a simple tap-in to double the advantage.

But Black Cats substitute Adam Johnson set up a tense finale when he curled home a free-kick in the 82nd minute and Jermain Defoe lashed a finish past Simon Mignolet in the final seconds to deny the hosts.

The pre-match team news confirmed one change for the home side, with Joe Allen replacing Lucas Leiva in midfield. Daniel Sturridge, meanwhile, was named among the substitutes as his fitness recovery continues.

Jürgen Klopp was not on the bench, however. A suspected bout of appendicitis meant the manager had to miss the game, with the remaining members of the German’s coaching staff assuming the necessary duties in his absence.

A quiet start to proceedings was broken on seven minutes when a neat move out from the back by the visitors saw Patrick van Aanholt surge into space along the left flank, but the defender’s diagonal low drive was wide of the far post.

And the Reds’ efforts to develop a rhythm in the early stages were then affected by an enforced substitution at centre-half – Dejan Lovren departed with an injury problem and Kolo Toure was brought on.

But Liverpool grew into the contest and only a good stop with his legs by Black Cats goalkeeper Vito Mannone kept Alberto Moreno at bay after Jordan Henderson won possession and Lallana teed up the Spaniard inside the box.

They were thwarted again approaching the half-hour. Firmino’s prodded pass forward got Milner in behind but the vice-captain’s cross towards the supporting Lallana and Allen was intercepted by John O’Shea.

The hosts were dominating possession and spending the vast majority of the game in the opposition half, searching for an opening over or around the well-organised Sunderland defence only to find their path blocked.

So Firmino opted for a more direct approach a minute before the break, blasting a left-foot shot from 20 yards that swerved and dipped en route to goal – but not quite enough.

The Brazilian should have had an assist to his name seconds later. Lallana curled in a cross from the right that he flicked on to Moreno at the back post, who misjudged the chance and skewed the ball off target.

Allen succumbed to an injury in first-half added time and was replaced by Jordon Ibe, as the sides returned to their respective dressing rooms with the score still goalless.

Firmino was the architect of Liverpool’s first opportunity in the second period too. The No.11 curved a superb pass through the Sunderland backline to Moreno, whose low delivery across goal eluded Lallana on the opposite side.

Very much the creative spark, Firmino next went close on his own, using an agile turn and then a nutmeg to work room for a fierce strike from the edge of the area that zipped narrowly the wrong side of the upright.

But persistence paid in the 59th minute.

Milner sent in a deep cross from the left hand side that could not be ignored and Firmino gladly accepted the opportunity, nodding a precise header back across the ‘keeper and into the corner to break the deadlock.

The Reds seized upon the momentum now behind them and both Lallana and Ibe had efforts saved by Mannone shortly after the latter collected a short corner and thrashed a shot that appeared goalbound until a slight deflection.

Van Aanholt threatened a response when he broke free and moved into the box with intent but he clipped wide of the near post and found the side-netting instead.

And Liverpool made the Black Cats pay on 70 minutes.

Firmino’s pressing and vision forged a brilliant second goal as he retrieved the ball high on the left flank, drew a number of defenders to him and squared into the middle for Lallana to touch and tap into a gaping net.

Unfortunately, Sam Allardyce’s team refused to yield and they halved their deficit eight minutes before the end when Johnson found the bottom corner with a low free-kick.

And the visitors levelled the match with a minute to go, Defoe rolling Mamadou Sakho inside the box and smacking a shot beyond Mignolet to ruin the Reds’ previous good work.