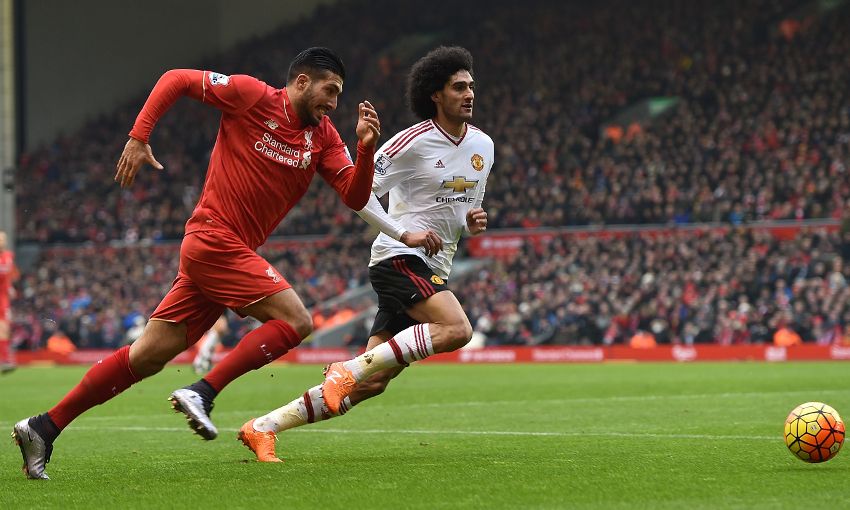 The Scouse forward's drive into the roof of the Anfield Road end net secured all three points for the visitors at the end of a contest which the Reds dominated for large periods.

Many of the hosts' best chances came in the first half, but a failure to capitalise allowed United to stay in touch and claim a one-goal success on Merseyside through their captain.

Jürgen Klopp elected to make just one change from the side that played out a thrilling 3-3 draw with Arsenal four days earlier, as Lucas Leiva returned in place of Jordon Ibe to boost the numbers in central midfield.

United had also shared six goals in an entertaining draw in their last game but, with the stakes significantly higher in this fixture, fans were treated to a cagey opening at Anfield.

The first chance of note fell the way of the visitors, as they won a free-kick just outside the box that offered the chance to swing in a testing delivery early on.

But the Reds cleared through Mamadou Sakho and set about evidencing their own threat during the productive 20-minute spell that followed.

Their first opportunity came when Adam Lallana was narrowly beaten to a ball over the top by David de Gea and Roberto Firmino drove just wide with the follow-up from the edge of the area.

James Milner was next to go close, firing over after meeting a brilliant Firmino crossfield pass at the back post.

The match then saw its first flare-up, as Lucas took exception to a Marouane Fellaini tackle on Milner and the subsequent pushing and shoving resulted in both men receiving a talking to from Mark Clattenburg.

Liverpool continued to push for the breakthrough before the half-time whistle, with Jordan Henderson sending a side-footed effort just wide of the post after a lightning exchange around the United box before missing the target with two half-volleyed efforts.

But Klopp could no doubt consider himself happy with his team's first-half performance, even if the scoreline did not reflect the hosts' dominance.

The Reds began the second period in similar mood, and United had De Gea to thank for keeping them level when Emre Can deceived Chris Smalling with a stepover and fired in a low shot that the Spanish 'keeper could only stop with his legs.

Louis van Gaal's team rallied, however, and were almost celebrating the opener when a spell of possession ended in Anthony Martial jinking through the box and shooting just wide of the far post.

As the match entered its final 25 minutes, De Gea was at it again as he kept out a powerful Can drive with a full-length save in front of the Kop before clawing Firmino's dinked cross away from danger.

And the value of those contributions was underlined a short time later, as Rooney provided the finishing touch when a Fellaini header off the bar dropped to him in the box, turning the ball home emphatically.

The Reds chased an equaliser as the clock ticked down, throwing on Christian Benteke and Steven Caulker in forward positions, but United held firm to see out the win.