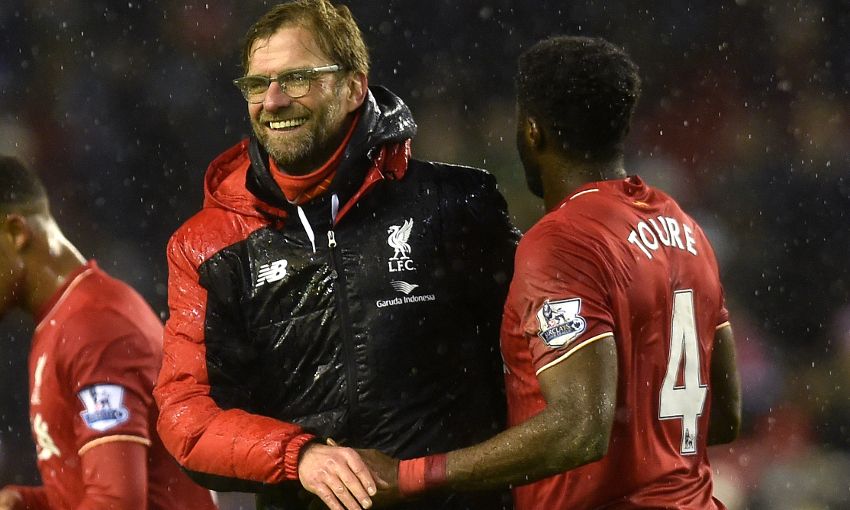 Liverpool were well worthy of the dramatic point they secured from a 3-3 draw with Arsenal after an 'all-time spectacular game', according to manager Jürgen Klopp.

The Barclays Premier League clash at Anfield had a little bit of everything as the Reds took the lead twice, the Gunners recovered to take control and Joe Allen restored parity in the frantic final moments.

Roberto Firmino beat Petr Cech with a pair of excellent finishes either side of a response by Aaron Ramsey, before Olivier Giroud forced in another equaliser from a Gunners corner.

The France striker swept in a curler to put his team in front early in the second half and the win looked to be Arsenal’s until substitute Allen latched onto a Christian Benteke knockdown and planted a shot low into the corner.

Klopp said: “It was a great football game, how it should be. I think people will talk about this game, maybe not too long because on Sunday it is Manchester United, but it’s not easy to forget.

“The beginning was really good. Not perfect, of course, but not too far away from it because we knew how they play and at the start we were better in the game and played really good football.

“We made our first goal, forced it in this situation; the first shot in the box from Emre and it was not easy to see for Petr Cech because there were a lot of legs in the box. Roberto was fast enough, especially in mind, to make this goal.

“We have to defend set-plays better; it’s an easy thing to say but we have to work on it and we will work on it. We will analyse it, of course, and we have to do it better.

“Then a little bit of losing control and especially around the second goal because Giroud was on the ground after a challenge. We stopped the game a little bit but it wasn’t stopped and they used the situation to make another easy goal.

“We lost control and it wasn’t too easy, we lost the ball easily. They are strong on counter-attacks, everybody knows this and so we had to defend.

“In the second half we were again in the game; it was a little bit more open than the beginning of the first half but we came back into the game. At the end, it was brilliant from Giroud but in the beginning we have to defend it better – it was not too difficult. We have to be more concentrated in situations like this.

“Then you need a little bit of luck and we had it. We changed players and it was a perfect ball for Christian, a perfect header and a perfect finish. I think it was a well-deserved draw in an all-time spectacular game.”

Having fielded a youthful XI for the FA Cup tie at Exeter City last Friday, the boss made wholesale changes for the first of a crunch double-header at Anfield this week.

Firmino was the subject of praise from the German, of course, but Klopp declared himself satisfied with the efforts of his whole team on a night of relentless intensity.

He firstly said of the forward: “I could talk about this for half an hour, but to be honest I think it should be normal because I know how good he is. If you are good, you have to show it and tonight he did.

“It was very important for us because for 95 minutes, he was always thinking about playing in different positions and in all of them was really good.

“He made perfect goals – the first was really good, the second spectacular, brilliant… whatever you want to say! It was a really good game, but he wasn’t the only one.

“If we talk tonight about special performances, Kolo Toure… I have to show more than my respect because it is not easy and he did great, as did a lot of other players. You saw it.

“Millie had the problem with his calf until a week-and-a-half ago. He’s now in training but is not in the rhythm, and obviously Hendo cannot be in the rhythm.

“Perfect moments, perfect moments and then losing the game a little bit – that’s normal in this case. Playing against Arsenal is not too easy. They tried everything – really everything – and for long periods did really, really well and I was really satisfied.

“But in the end, if you want to win – and we wanted to win against Arsenal – you cannot have this lapse of concentration which we had. That’s it, we go on.

“It was a good football game. A draw can be really good to watch, and that was one of these games. Now it’s recovery and again like this, or better, against Manchester United.”

With Liverpool attempting everything to produce an equaliser late on, loan signing Steven Caulker was sent on as a striker and played his part on debut for the club.

“I thought it was a good idea, but after the goal he tried to stay as a striker and we had to shout really loudly to change our tactics!” said Klopp.

“He won three or four headers, important headers for us, and so it was a good change and for him, a good debut.”