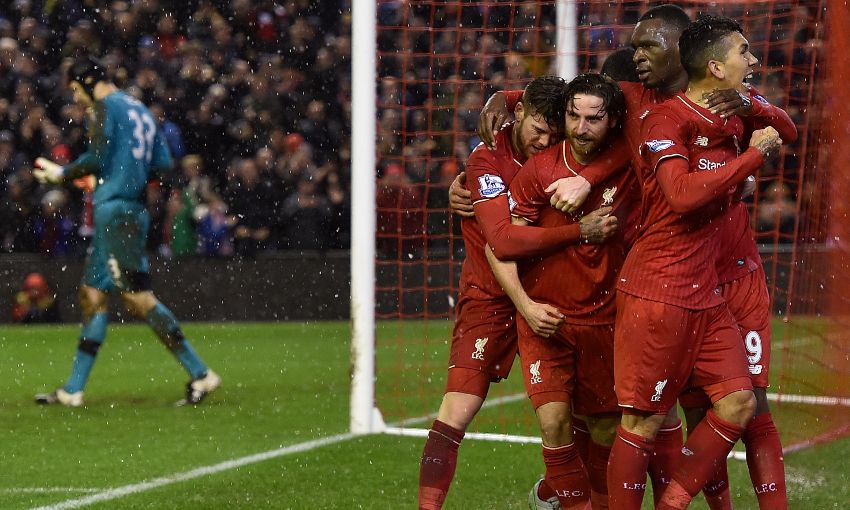 Joe Allen's 90th-minute goal secured a deserved point for Liverpool as they played out a pulsating 3-3 draw with Arsenal at Anfield on Wednesday evening.

The Welshman steered home fellow substitute Christian Benteke’s knockdown at the death to ensure the spoils were shared on an entertaining night in front of the Kop.

The Reds opened the scoring early on as Emre Can’s well-hit drive was parried by Petr Cech, but only into the path of Roberto Firmino, who took a touch before reversing a shot into the back of the net at the near post.

The Gunners drew level through Aaron Ramsey’s close-range finish from Joel Campbell’s incisive pass shortly after, before the hosts regained the lead once more.

Firmino collected James Milner’s lay off 20 yards from goal and curled into the top corner with a sensational effort; nevertheless, with only 25 minutes gone, Arsenal equalised for a second time when Olivier Giroud turned in a low corner.

Giroud put Arsenal in front after half-time with a sharp turn-and-finish inside the area shortly after the break, but Liverpool’s impressive response was duly rewarded when Allen tucked in at the end.

As expected, Jürgen Klopp made 11 changes to his starting line-up from the team deployed at Exeter City last Friday night.

Jordan Henderson returned following injury, while in defence there were berths for Mamadou Sakho and Kolo Toure. New loan signing Steven Caulker was named on the bench.

Liverpool came flying out of the traps and with only 10 minutes elapsed, they were ahead – and deservedly so.

Can collected possession on the left corner of the box and struck powerfully towards goal. Cech was able to repel the effort, but was helpless to prevent Firmino pouncing on the rebound and steering it home.

The hosts were firmly in the ascendancy; however, Arsenal drew level with their first attack four minutes later when Campbell slid a pass between Sakho and Toure, allowing Ramsey to reach it and divert beyond Simon Mignolet at the near post.

Liverpool were back in front almost instantly. Pressing their opponents deep inside their half, the home team regained possession before Milner laid the ball off for Firmino 20 yards out. He took a touch before sweeping into the top corner from a standing position with a moment of inspiration.

But before anyone had time to draw breath following an electrifying opening, it was 2-2. This time, Giroud met Ramsey’s low corner with a near-post prod to net.

The French striker then spurned a glorious opportunity to put Arsenal ahead when he somehow failed to direct Theo Walcott’s low cross over the line after it had bypassed Mignolet.

It was proving a fascinating contest and both sides had further opportunities before the interval, most notably for Liverpool when Cech was required to get a glove to Firmino’s low pass across the six-yard box to deny Adam Lallana a tap in.

And in first-half stoppage-time, Firmino was a matter of inches away from completing a hat-trick when his spin-and-shot from a half-cleared Jordon Ibe cross skimmed against the top of the crossbar.

It had been a relentless opening 45 minutes, and the second period began in similar fashion as first Campbell fired high over the bar from Mesut Ozil’s centre, before Alberto Moreno did the same at the other end with a half-volley when well positioned.

But 10 minutes after the re-start, Arsenal went in front for the first time on the night. Giroud collected Campbell’s deflected pass and spun Toure before firing into the bottom corner from the penalty spot.

Klopp opted to introduce Benteke in place of Milner just after the hour as his side looked to restore parity, and Moreno saw an effort from distance deflected narrowly wide before Firmino glanced a header off target.

Next, only a last-ditch sliding challenge from Per Mertesacker prevented Lallana from seemingly steering in Benteke’s pass.

With time ticking away, Allen and then Caulker were brought on – the latter as an auxiliary striker – to try and inject fresh legs into the Reds’ play.

And it ultimately paid dividends as Benteke headed across goal for Allen to sweep in on 90 minutes and ensure Klopp’s team deservedly picked up a share of the spoils.