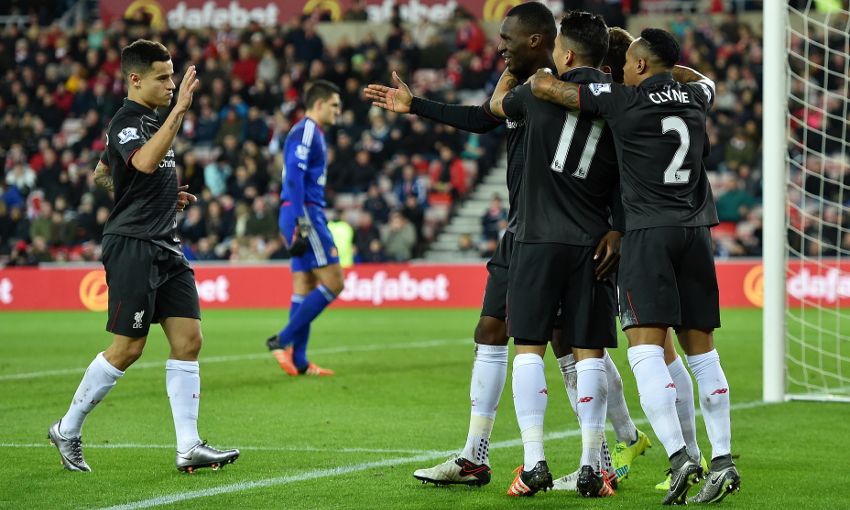 Christian Benteke scored the winning goal for the second game in succession as Liverpool ended 2015 with a 1-0 victory over Sunderland at the Stadium of Light on Wednesday.

The Belgian struck with a side-footer within moments of the contest resuming after half-time and the effort was ultimately enough for Jürgen Klopp’s team to take maximum points in the Barclays Premier League.

It also lifted the Reds up to seventh place in the table with exactly half of the season completed and plenty to play for heading into the New Year.

The manager opted for a single change to the side that had started the Boxing Day victory over Leicester City and it was the match-winner of that game, Benteke, who came in for the unavailable Divock Origi.

It was a bright beginning by the Reds on the vast expanse of the Sunderland pitch but it was a more direct approach that yielded the first save of the game, Vito Mannone claiming Nathaniel Clyne’s ambitious drive from 35 yards out.

Roberto Firmino’s face told the story of his own frustration when the Brazilian received a reverse pass from compatriot Philippe Coutinho in space inside the box only to miscontrol as he bore down on goal.

A response arrived from the hosts in the 15th minute as Jermain Defoe spun to ward off the attentions of Mamadou Sakho, sprinted into a central area and lashed a shot which Simon Mignolet tipped over the crossbar.

Firmino opted to try his luck from distance next and was unfortunate to watch a right-foot swipe be touched onto the post by Mannone after the No.11 had twisted and turned into shooting space at the edge of the box.

Black Cats boss Sam Allardyce was forced into a substitution on the half-hour with Duncan Watmore entering the action for midfielder Jack Rodwell due to injury.

Former Liverpool forward Fabio Borini had been quiet up to that point but a neat touch from a return pass infield by Patrick van Aanholt opened up a chance to curl around Mignolet towards the far corner – just wide.

Mannone again thwarted Firmino, this time as he directed a header on target having been picked out by Clyne on the flank, and Adam Johnson clipped a promising free-kick high off target at the other end to leave the match goalless at the interval.

That scoreline changed within seconds of the restart, though.

Clyne collected the ball around the halfway line and knocked a pass forward that was flicked on by Adam Lallana and fell perfectly for Benteke – alert to the opportunity – to instantly send a precise finish into the bottom left corner.

Understandably shocked by the speed of the breakthrough, Sunderland rallied nevertheless and there was danger when Borini stepped inside several challenges in the box but the Italian’s strike was too straight to concern Mignolet.

Klopp made his first change of the night on the hour and it was the end of Jordan Henderson’s contribution against his old club, with Lucas Leiva taking up both his position in central midfield and the captain’s armband.

Coutinho threatened to double the visitors’ advantage when he took possession in the left channel and moved inside with intent. Instead, the low hit was a comfortable one for Mannone to handle.

The No.10 skewed another attempt from a similar angle harmlessly into the crowd before a one-two with Benteke was stemmed in the area at the crucial moment.

Sunderland pushed for an equaliser and caused a couple of scares as the clock ticked down but there were no further goals and it was a positive conclusion for the Reds in their 64th and final game of 2015.