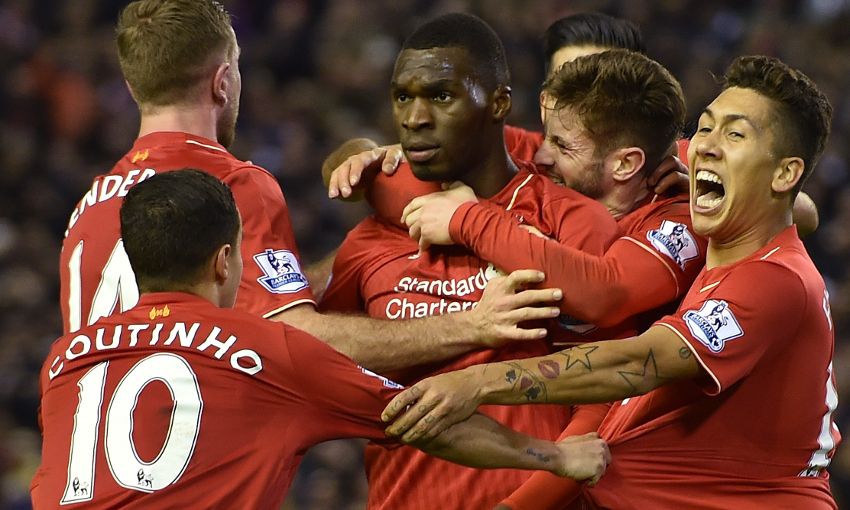 The first-half substitute bagged the game’s only goal with 63 minutes played, steering home first time after Roberto Firmino’s cross fell invitingly into his path 12 yards out.

It was no more than the Reds deserved for a dominant display against the table toppers, who suffered only their second defeat of the league season to date as Jürgen Klopp’s men picked up their first three points of December.

Liverpool’s team sheet confirmed three changes from the side that had begun last time out against Watford at Vicarage Road, with Simon Mignolet, Dejan Lovren and Divock Origi replacing Adam Bogdan, Martin Skrtel and Lucas Leiva.

The Reds kicked off aiming to secure a first victory since demolishing Southampton 6-1 at St Mary’s on December 2 – a run of four matches without a win prior to today – and Philippe Coutinho fired an early signal of intent when he arched an effort just wide of the far post with three minutes on the clock.

The hosts’ assertiveness continued when Origi saw a spin-and-shot blocked by Wes Morgan, while another Coutinho attempt from the edge of the area ricocheted into a crowd of blue shirts soon after.

It served to ratchet up the noise level inside Anfield and on 16 minutes, the best opportunity of the game so far arrived when Jordan Henderson’s pass sent Origi speeding into space inside the right channel of the box.

The Belgian’s low pull back missed its intended target of Firmino, but it rolled for Coutinho who smacked high over the crossbar when well positioned.

Within seconds, Liverpool were pouring forward again – this time, Adam Lallana crashed a drive into the side netting from a tight angle.

On 23 minutes, Emre Can’s curler forced a full-stretch save from Kasper Schmeichel to prevent it finding the bottom corner before Origi showed fine strength to hold off Morgan and prod a shot towards goal, only for Leicester’s stopper to thwart once more at his near post.

The chances continued to come – Origi, Mamadou Sakho, Lovren and Lallana all trying their luck as the home team’s dominance showed no sign of any let up.

But their game plan suffered a blow on 37 minutes when the lively Origi was forced from the field with an injury - Benteke replaced his compatriot in attack.

And with half-time looming, Leicester fashioned their first chance of note when Riyad Mahrez skipped into space on the edge of the box and had a stinging drive beaten away by Mignolet.

The teams headed into the break on level terms, but the Reds went into the second period looking for more of the same.

Indeed, that’s exactly how the opening exchanges of the half played out – and Klopp’s side finally took the lead just after the hour following an extended spell of pressure.

Collecting the ball on the left, Firmino created space before supplying Benteke with a finely-weighted pass across the area, which the No.9 struck into the bottom corner first time on the stretch.

However, Leicester threatened to cancel out the lead within moments, but Mignolet was able to deny Nathan Dyer’s hooked close-range strike from Christian Fuchs’ cross.

Back at the other end, Coutinho skimmed the top of the netting with a fierce drive from 25 yards while Firmino sent a half-volley bouncing across the face of goal.

And deep into stoppage time, with Schmeichel stranded upfield after going up for a long throw in, Benteke spurned the chance to add a second when his shot struck Morgan in front of the line when a goal seemed inevitable.

But it was be Liverpool’s day as they stood firm in the face of a couple of nervy moments at the death to collect the victory.