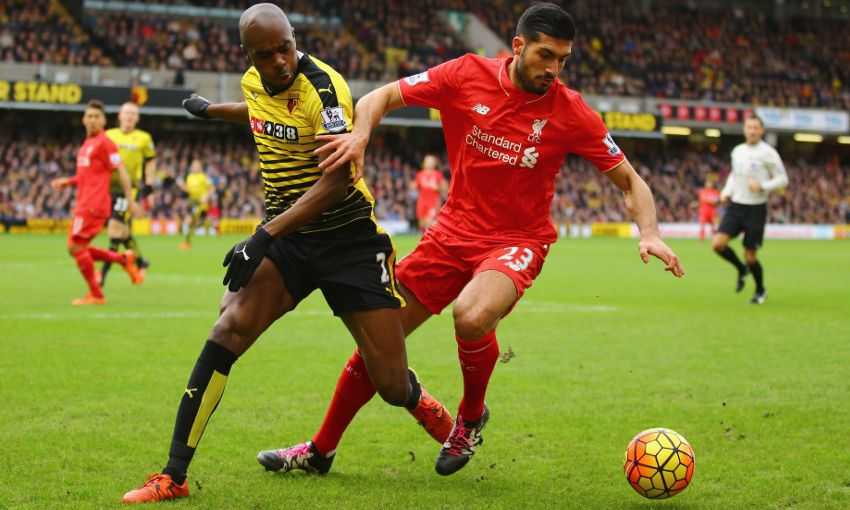 Liverpool failed to strengthen their assault on the Barclays Premier League top four as they fell to a 3-0 defeat at Watford on Sunday afternoon.

Quique Sanchez Flores' team took the lead after just two minutes when Nathan Ake forced the ball home from a corner, and that advantage was doubled shortly after through striker Odion Ighalo.

Jürgen Klopp's team showed greater purpose in the second half as they got to grips with the hosts' physicality, but their hopes of a late turnaround were dashed as Ighalo headed home from close range with five minutes remaining to seal the result.

Injuries to Dejan Lovren and Simon Mignolet provided opportunities for Mamadou Sakho and Adam Bogdan to start, while Roberto Firmino and Lucas Leiva both returned to the XI after missing out on the 2-2 draw with West Bromwich Albion.

Watford, meanwhile, named in-form strike duo Ighalo and Troy Deeney in their team, but the early opener came from a somewhat surprising source in full-back Ake.

The Dutchman was on hand to poke the ball home when Bogdan spilled a corner, though there was a suggestion that the ball had been kicked from the visiting goalkeeper's hands.

The Reds looked for an immediate reply through Philippe Coutinho, with the Brazilian seeing a cross cleared after a scramble and a shot on goal comfortably saved by Heurelho Gomes.

And the visitors' failure to make the most of those chances was punished straight after, as Ighalo pounced upon some hesitant defending and shrugged off Martin Skrtel before producing a fine finish from a tight angle inside the box.

The No.37 was on hand to clear moments later when a Bogdan punch fell to Ighalo and it looked like the Nigerian would double his tally, but that was his final contribution as injury forced him to make way.

Rather than go like-for-like, Klopp elected to bring on Divock Origi and move Lucas back to centre-half, but the change did not seem to disrupt the hosts' rhythm.

They went close again when a corner almost deceived Bogdan, but the Hungarian got back in time to push the ball away from his near post and ensure it remained 2-0 at the break.

Liverpool started the second period at Vicarage Road impressively, with Alberto Moreno testing the home defence with a run in behind and Origi forcing a save from Gomes after latching onto a ball over the top.

But Watford rallied back and only some desperate defending on the line prevented them finding a third after an excellent piece of skill in the box from Ighalo.

The hosts' No.24 continued to cause problems, but he was denied a second when through on goal just past the hour mark thanks to a fantastic save from Bogdan.

Watford, too, were indebted to their goalkeeper almost immediately after as Jordan Henderson escaped Ake in the box but couldn't beat Gomes with a half-volley.

The Brazilian was called into action again by Emre Can as the game entered its final 20 minutes, before Klopp looked to Christian Benteke and Jordon Ibe to provide some thrust from the bench.

But all thoughts of a comeback were ended in the 85th minute as Ighalo completed the simple task of heading in a dinked cross from the right to send the home fans wild.