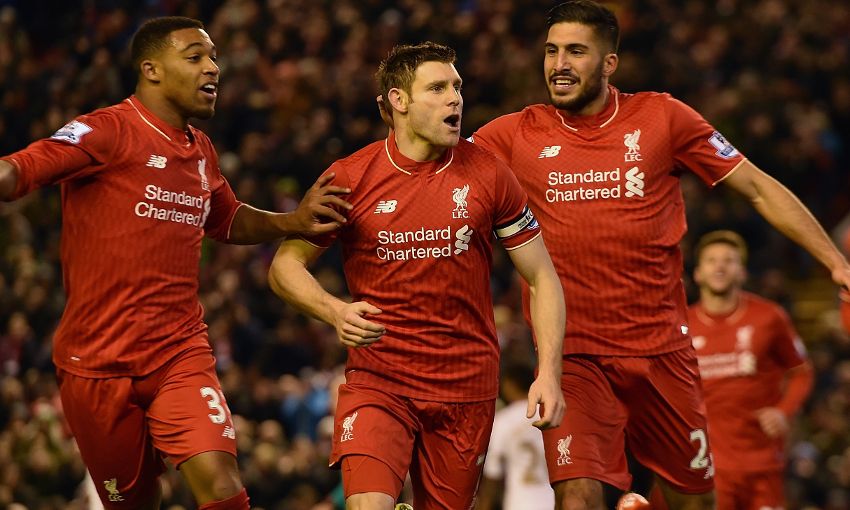 James Milner's second-half penalty earned Liverpool a 1-0 home victory over Swansea City on Sunday and moved the Reds up to sixth in the Barclays Premier League table.

The No.7 struck from the spot for the second match in succession to settle a tight contest at Anfield and give Jürgen Klopp’s side a third consecutive win.

There were further positives too as Jordan Henderson returned to competitive action for the final quarter of the game and Daniel Sturridge featured in the closing stages.

The manager opted for three changes from the line-up that faced Bordeaux on Thursday, with Emre Can, Adam Lallana and Martin Skrtel replacing Joe Allen, Lucas Leiva and Kolo Toure.

Two names on the bench stood out too. Henderson was fit enough to be a substitute after more than three months on the sidelines, while Sturridge returned to take up a spot in the matchday 18.

Before the action got underway, Anfield paid tribute to former Liverpool defender Gerry Byrne – a minute’s applause recognising the man who played 333 games for the club and famously helped secure the 1965 FA Cup with a broken collarbone for most of the final.

After an uneventful opening five minutes, the Reds came close to taking an early lead via what would have been a cruelly unfortunate own goal by Kyle Bartley.

Christian Benteke dummied to allow Lallana to find the onrushing Jordon Ibe with a slide-rule pass along the right and the winger darted on a diagonal into the area. But as he shaped to shoot, the Swans centre-back timed an intervention, sending the ball against the left post and away.

Next, Benteke briefly thought he was clean through having been picked out by a looping knock cross-field from Can, only for Kyle Naughton to recover before a shot could be struck.

The tone had been set on a bitterly cold afternoon and Ashley Williams had to produce a crucial block when Lallana was the latest to prepare an effort from inside the box for the home team.

Having weathered the initial storm, Garry Monk’s side began to come into the game around the half-hour mark, though their forays were built around counter-attacks and set-pieces, leaving Liverpool to dominate possession.

Klopp gesticulated for more movement from his players and Roberto Firmino was inches away from releasing Benteke in behind with a pass from deep into the left channel.

Nathaniel Clyne delivered an inviting cross along the front of goal but no teammate could connect and Alberto Moreno curled a free-kick from 20 yards out too high to trouble Lukasz Fabianski as the half concluded without a goal.

The visitors were the brighter immediately after the interval and a concerted spell of pressure led to Ki Sung-Yueng clipping a shot over the crossbar.

Ibe responded by gliding into a shooting position from the left and targeting the near post with a bobbling hit, but Fabianski was down quickly to palm it away at the cost of a corner.

When the breakthrough did arrive on 62 minutes, it was from the penalty spot, as Neil Taylor was penalised for handball from Ibe’s attempted cross into the area.

As he did on Thursday, Milner stepped up from 12 yards and coolly lifted his finish into the roof of the net to put Klopp’s charges ahead in front of the Kop.

The good news continued moments later with the introduction of Henderson in place of Firmino to bring an end to a lengthy period out of action for the skipper, and then Sturridge for fellow forward Benteke.

Teed up by Henderson, Milner was close to providing the Reds with a cushion but dragged his left-footer wide of the far post with 15 minutes remaining, Sturridge unable to reach it for a tap-in either.

In the end, they did not need a second, despite considerable pressure from Swansea in the closing stages, and Klopp’s men can head to Southampton for their Capital One Cup quarter-final next week in high spirits.