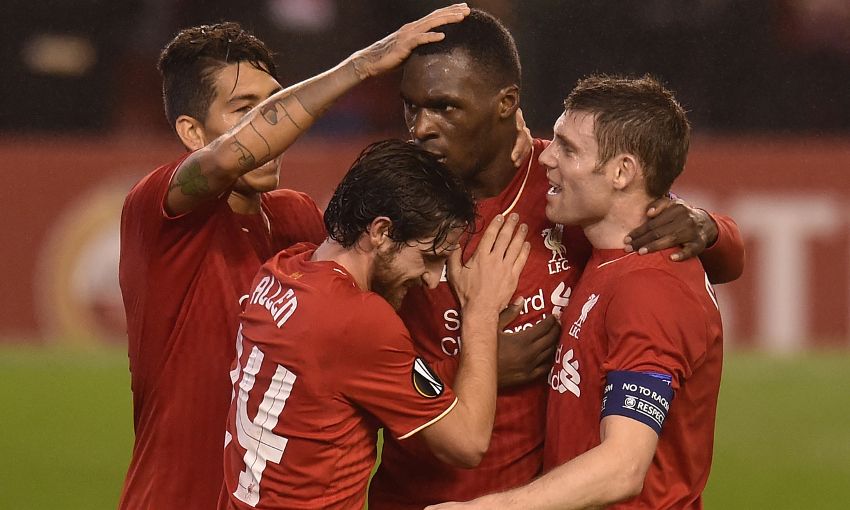 Liverpool secured their place in the knockout stages of the Europa League with a 2-1 win over Bordeaux at Anfield on Thursday evening.

James Milner's penalty and a well-taken Christian Benteke finish cancelled out Henri Saivet's opener in the first half, and the hosts saw out a result that puts them through to the next round without much fuss in the second period.

The victory, combined with FC Sion's earlier loss to Rubin Kazan, means the Reds top Group B going into their sixth group-stage game away to the Swiss outfit, and they need only avoid defeat in order to clinch that position.

Jürgen Klopp elected to make four changes to the side that defeated Manchester City at the Etihad Stadium at the weekend, with the return of striker Benteke to the starting XI the headline news from the hosts' teamsheet.

Despite the strength on show in the Reds' line-up, Bordeaux made a fearless start as they attempted to put both Simon Mignolet and Dejan Lovren under immediate pressure with an early press.

However, the coolness with which the pair played out typified an unflustered start from Liverpool, as they quickly got down to the task of working their way through a massed visiting defence.

While the Reds looked lively enough as they exchanged the ball quickly, it was in fact two longer passes over the top that gave them their best sights of goal in the opening 10 minutes.

Unfortunately, Roberto Firmino was unable to provide the finishing touch when played in by both Lucas Leiva and Mignolet.

Liverpool believed they had opened the scoring when Benteke coolly finished a delightful Jordon Ibe through-ball with 29 minutes gone, but the Belgian was flagged offside much to the relief of Bordeaux.

And, remarkably, the visitors responded by taking the lead in somewhat bizarre circumstances.

Willy Sagnol's team were awarded a free-kick inside the Kop-end box after Mignolet was adjudged to have held the ball too long and Saivet made no mistake in directing a tee-up from Jaroslav Plasil into the top corner from there.

Thankfully, Liverpool immediately found a way back into the game when Benteke was downed in the area by Ludovic Sane and Milner sent Cedric Carrasso the wrong way with a side-footed finish from the spot.

The hosts then completed a rapid turnaround through their returning No.9 as he controlled a Nathaniel Clyne centre deftly and smashed emphatically home on the very stroke of half-time.

Inevitably, Benteke was at the heart of the first big opportunity of the second period as well, but he could only direct a Firmino pull-back over the bar after a good combination between the Brazilian and Joe Allen.

The Belgian had the ball in the back of the net yet again in the immediate aftermath of that miss but was pulled up for a foul after finishing Milner's low cross from the left.

The game lost its shape somewhat on the hour mark as Bordeaux threw men forward in an attempt to restore parity and the hosts counter-attacked at pace but often failed to find the key touch.

When the efforts of both teams failed to provide a decisive fourth goal of the match, it appeared that a calm would descend on proceedings during a short lull in play prior to the final 10 minutes.

However, Bordeaux rallied, and Mignolet needed to be alert to beat out a curling free-kick from the goalscorer Saivet at the close and ensure the Reds claimed all three points.