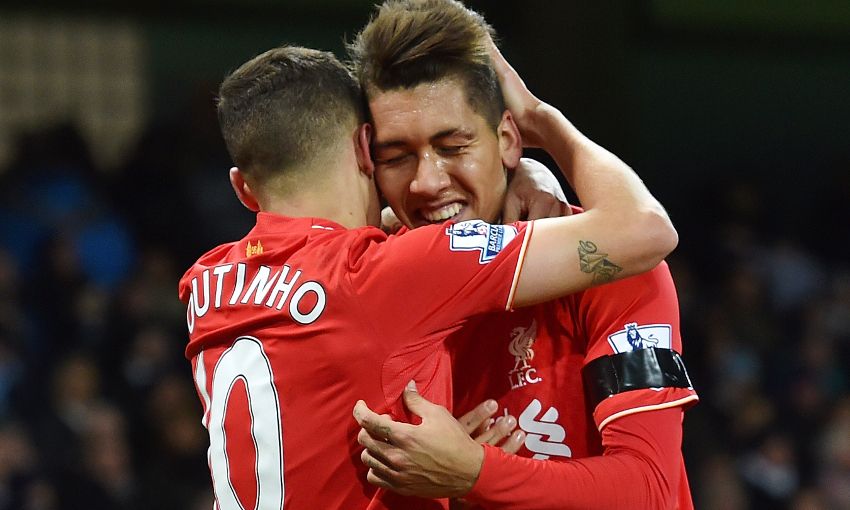 Liverpool produced an outstanding display to record an emphatic 4-1 victory over Manchester City at the Etihad Stadium on Saturday night.

The Reds took the lead with just seven minutes played when Eliaquim Mangala inadvertently turned Roberto Firmino’s low cross into his own net from close range.

The Brazilian then centred for Philippe Coutinho to add a second midway through the first half, with his compatriot sweeping through the legs of Joe Hart with one touch.

Firmino got his name on the scoresheet to leave City completely shell-shocked with only half an hour played. A magnificent counter-attack from deep saw the ball worked to Emre Can 25 yards out. His backheel played in Coutinho, who squared for his teammate to tap in.

However, the home side did reduce the deficit before half-time when Sergio Aguero curled beyond Simon Mignolet from 20 yards.

Nevertheless, Martin Skrtel smashed home a half-volley from a corner with the game heading towards its conclusion to put the seal on an incredible evening’s work for Jürgen Klopp and his charges.

The pre-match team news confirmed Dejan Lovren’s place in the starting line-up, replacing the injured Mamadou Sakho to partner Skrtel at the heart of the visiting defence.

That was the only change to the 11 that had been selected to begin the 3-1 win at Chelsea on October 31, with Firmino leading the line.

On the bench, there was the welcome sight of Daniel Sturridge’s name for the first time under Klopp’s stewardship.

In opposition, Raheem Sterling lined up against the Reds for the first time since leaving the club in the summer.

Liverpool’s game plan was evident from the first whistle as they pressed and harried their opponents all over the park.

And with just seven minutes played, the approach paid dividends as they opened the scoring.

Coutinho put Bacary Sagna under pressure 40 yards from his own goal, forcing the City defender to concede possession. The Brazilian fed the ball to Firmino inside the area, whose first-time cross was bundled over the line by Mangala yards from goal.

The tactic was proving effective in the extreme, with Liverpool looking threatening on the break – and on 19 minutes, a well-worked move opened up City, only for James Milner to drive over the crossbar against his former club.

But on 23 minutes, Klopp’s side did further their advantage. A fine counter-attack resulted in Firmino racing to the right corner of the box, before sliding a low ball into the middle of the box, enabling Coutinho to tuck home first time.

Incredibly, Liverpool weren’t done there. Another slick raid forward concluded when Can’s audacious backheel played Coutinho into space in the box. He instantly played a square ball for Firmino to tap beyond Hart with consummate ease.

3-0 but still the chances continued to come; Firmino first denied by Hart when one-on-one with the ‘keeper before he hooked inches wide of the far post on the turn.

With just minutes of the half remaining, City did reduce the arrears with Aguero curling home from distance after Liverpool had failed to sufficiently clear their lines from an attack.

That gave Manuel Pellegrini’s men some hope for the second period and they did give cause for some nervy moments in the opening exchanges after the re-start.

Nevertheless, the Reds went agonisingly close to restoring their three-goal advantage when Adam Lallana allowed Coutinho’s slide pass into the box to run for Firmino, only for the boot of Hart to deny his seemingly goal-bound strike.

Coutinho did have the ball in the back of the net just after the hour, but he was flagged offside from Firmino’s pass after rounding Hart.

The visitors were afforded a let-off moments later when Milner’s attempted back pass sent Sterling scampering into the box. He looked to pick out Aguero, but Liverpool were able to recover and Mignolet saved his eventual shot. Fernando then scooped high over the bar from a free-kick.

Klopp was forced into making his first change of the night with just over 20 minutes left on the clock when Coutinho hobbled off after picking up a knock and was replaced by Jordon Ibe.

Christian Benteke was introduced shortly after and spurned a great chance to grab a fourth when Ibe’s pass sent him bounding down on goal, only for Hart to thwart his attempt.

It didn’t matter, however, as from the resulting corner, the ball dropped invitingly for Skrtel to smash home a stunning volley on the turn and end any hopes of a City comeback and leave the visiting supporters in ecstasy.