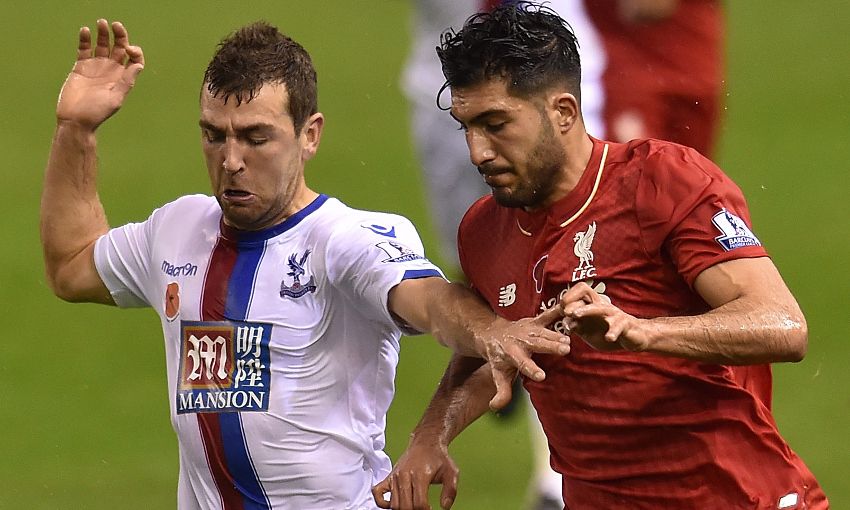 Jürgen Klopp suffered his first defeat as Liverpool manager as Crystal Palace claimed a 2-1 victory over the Reds at Anfield on Sunday evening.

Yannick Bolasie almost burst the Kop end net midway through the first half to give the Eagles a lead, which was equalised by Philippe Coutinho’s back-post finish shortly before the break.

The Reds created a host of chances to claim three more Barclays Premier League points but instead it was the travellers who took them – Scott Dann nodding in at the second attempt with eight minutes to go.

Klopp shuffled his pack for Liverpool’s seventh fixture in 22 days, bringing Coutinho and Adam Lallana back into his attack, while Lucas Leiva returned to captain the side and Martin Skrtel partnered Mamadou Sakho in central defence.

Before the action got underway amid a light rain shower, the entire stadium observed an immaculate minute’s silence to pay respects on Remembrance Sunday.

The shirts worn by the Reds for the game also featured a specially-embroidered poppy and the jerseys will be signed by the players involved and then donated to the Royal British Legion to raise important funds.

With the weather conditions worsening, both sides used the opening quarter-hour to try to find a footing in the game, the hosts especially alert to the well-known threats of the likes of Bolasie.

Coutinho curled an effort off target at one end and Yohan Cabaye thundered a shot of his own high into the Kop at the other as the contest picked up pace.

And the dynamic was firmly altered on 20 minutes when Bolasie blasted in the opener.

Wilfried Zaha had made ground along the right flank and delivered a cross into the Liverpool area, where Emre Can failed to adequately clear and the Palace No.10 pounced to spin and smash a fierce finish past Simon Mignolet.

Christian Benteke saw a downward header from a corner parried away by Wayne Hennessey and the striker then miscued at the crucial moment as Nathaniel Clyne and Lallana combined to square for the Belgian yards out.

It looked like Sakho would have to be replaced after the Frenchman landed awkwardly while warding off Bolasie – so much so that Dejan Lovren was waiting on the touchline to come on – but he persevered, much to the home fans’ delight.

Soon the centre-back did relent, however, and his defensive colleague was introduced.

And there was still time remaining in the half for Klopp’s charges to produce a well-worked equaliser on 42 minutes, with Coutinho in the right place at the back post to emphatically sweep into the net following Lallana’s flicked touch from a cross.

They almost grabbed a lead in the final seconds too but James McArthur cleared Lovren’s header off the line to ensure it remained 1-1 at the interval.

Liverpool’s momentum continued upon the restart and Benteke was left frustrated by firing a promising chance over the bar – under pressure – having been teed up by Coutinho.

There was pace and energy and endeavour to the attacks, with only the final touch or decision restricting the Reds, though they were thankful for some wayward finishing at the other end on the hour mark.

Zaha sprinted down his wing with the home side short in defence and picked out an unmarked Bakary Sako on the opposite side, who could somehow only clip an attempt wide of the near post from close range.

Benteke would have expected to score seconds later but instead nodded a header too high from Alberto Moreno’s cross, and Klopp then brought on Roberto Firmino as it seemed like another goal was on its way.

It was an enthralling match at this point and Palace had no intention of settling for a point either – as shown by Jason Puncheon’s curling blast from distance which stung the palms of the diving Mignolet.

Dann marshalled Firmino well enough to concede only a corner as the Brazilian targeted a winner just inside the area and the Eagles defender then made the most decisive contribution to settle the game.

He met a ball into Reds territory with a headed effort that Mignolet managed to push away, but Dann was there to force the rebound home at the second attempt, meaning a maiden loss for Klopp.