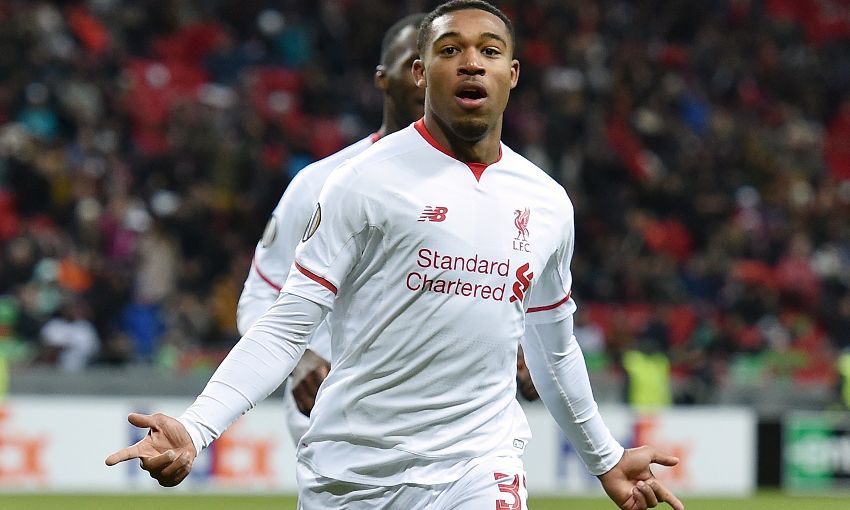 Liverpool recorded a third straight victory and bolstered their prospects of qualifying from Europa League Group B with a 1-0 win over Rubin Kazan in Russia on Thursday.

After James Milner had struck the crossbar in the early stages, Jordon Ibe’s first competitive Reds goal finally gave them a deserved lead on 52 minutes when he surged forward from deep and scored with a low edge-of-the-box drive that went in off the post.

The winger’s strike proved decisive and, coupled with Bordeaux’s draw with group leaders FC Sion in Switzerland, the result means Jürgen Klopp’s side can reach the knockout stages with a victory over the French outfit next time out.

The manager opted to make four changes to the team he fielded from the start of Saturday’s 3-1 win at Chelsea, with Christian Benteke – who netted Liverpool’s third at Stamford Bridge – spearheading the attack.

There were also returning berths for Ibe, Joe Allen and Dejan Lovren, with Philippe Coutinho, Lucas Leiva, Adam Lallana and Martin Skrtel dropping to the bench.

After a trio of 1-1 draws in the competition so far, the game got underway with the Reds knowing a victory could prove vital in the quest to secure qualification from the group.

And they almost took the lead with just six minutes played when Milner struck the crossbar after Roberto Firmino nut-megged a defender before sliding the No.7 into space inside the box.

Rubin then had Solomon Kverkvelia’s acrobatic clearance to thank for preventing Benteke heading in an Ibe delivery from point-blank range before the Belgium striker drilled an effort wide shortly after.

The visitors were dominant in the opening exchanges and Firmino perhaps should have done better when Benteke’s dummy sent him into space on the right of the area, but he dragged a strike the wrong side of the near post.

Nevertheless, for all of their possession and pressing, Liverpool were kept on level terms with Rubin heading into the break – albeit thanks largely to Sergei Ryzhikov’s reflex save in first-half stoppage-time to prevent Kverkvelia from turning Ibe’s cross into his own net inside the six-yard box.

The visitors began the second period on the front foot once again, and a flying block from Guillermo Cotugno deflected Alberto Moreno’s back-post drive into the side netting just seconds in.

However, Rubin’s resistance was finally undone on 52 minutes courtesy of a fine solo effort from Ibe.

Collecting the ball midway inside the hosts' half from Firmino’s neat reverse pass, the 19-year-old powered forward before finding the net with a well-placed strike from the edge of the area for his first senior goal for the club.

The lead could have been extended further soon after, but Ryzhikov foiled opportunities for both Milner and Lovren.

Ibe was denied a second goal by the Kazan ‘keeper on 68 minutes when a speedy counter-attack resulted in substitute Lallana – on for Milner – slipping the ball to the winger inside the area; however, his low drive was turned around the post.

And though Rubin applied late pressure, they failed to test Simon Mignolet, leaving Liverpool able to pick up a richly-deserved three points and significantly enhance their chances of progress in the tournament.