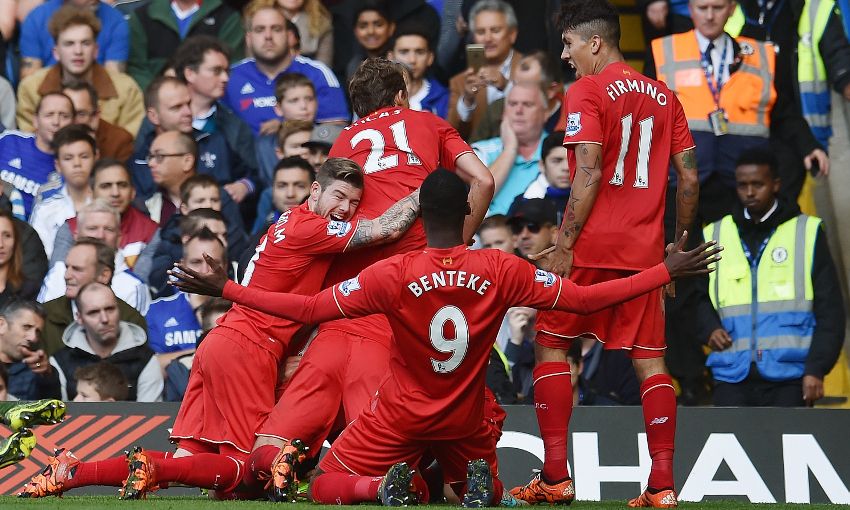 Jürgen Klopp secured a first Barclays Premier League win as Liverpool manager in emphatic style as they recorded a 3-1 victory over Chelsea at Stamford Bridge on Saturday.

Just four minutes had elapsed when the hosts opened the scoring as Ramires planted a downward header into the back of the net from Cesar Azpilicueta’s centre.

However, Philippe Coutinho drew the Reds level on the stroke of half-time, cutting inside the Chelsea goalscorer and curling a magnificent left-footed effort into the corner from outside the area.

Liverpool had dominated for long spells after falling behind and their pressure told on 74 minutes as the Brazilian worked his magic once again.

Collecting substitute Christian Benteke’s knockdown, Coutinho worked himself a yard of space inside the area before driving home via the aid of a deflection.

And Benteke made sure of the points when he helped himself to a goal, holding off the attentions of John Terry and Gary Cahill and arrowing a low effort into the bottom corner.

The pre-match team news confirmed just one change to the team that had started the last league outing against Southampton, with Roberto Firmino coming in to lead the attack in place of Divock Origi.

Meanwhile, Benteke was included among the substitutes after recovering from the injury that had kept him out of the Capital One Cup tie with Bournemouth in midweek.

The Reds went into the game buoyed by that victory on Wednesday, but they found themselves behind with less than four minutes on the clock when Ramires powered a header beyond Simon Mignolet from Azpilicueta’s cross from the left.

It could have been even worse for the visitors moments later when Terry went close to turning Cahill’s header across goal over the line on the slide.

Chelsea had started on the front foot, but a well-worked move at the other end fashioned a good chance for Nathaniel Clyne inside the hosts’ box, though he dragged it wide of the far post.

Liverpool were beginning to edge their way back into the contest, and Adam Lallana tested Asmir Begovic as he turned and shot just inside the area soon after.

The England midfielder was again thwarted by the home goalkeeper on 26 minutes when he stretched to get a boot to James Milner’s cross, but it was straight at the stopper.

It was from another Milner delivery that fashioned Liverpool’s next chance, this time Lucas Leiva headed downwards and into the arms of Begovic at the back post.

As half-time approached, there was no doubting the Reds were the team in the ascendancy and their dominance was duly rewarded in stoppage-time.

Collecting the ball 20 yards from goal, Coutinho sold Ramires a dummy, cutting inside the midfielder before dispatching a perfectly placed left-foot curler beyond the reach of Begovic and into the corner.

Klopp’s men picked up where they left off at the start of the second period, asserting heavy pressure on the home goal.

And after Coutinho, Milner and Lallana had all tried their luck, the boss opted to introduce Benteke into the action just after the hour, taking the place of Liverpool’s No.7.

Oscar almost reinstated the lead for Chelsea on 71 minutes having spotted Mignolet off his line from 40 yards out only to see his effort clawed away by the glove of the goalkeeper.

But it was to be Liverpool’s day and Coutinho fired them in front soon after, picking up Benteke’s knockdown, making space inside the box, and dispatching home in front of the travelling supporters.

It was to get even better for the Reds, too, as Benteke made certain of the outcome when he benefited from Lallana’s step-over by firing across goal and into the corner to put the seal on a fantastic afternoon’s work for Klopp and his team.