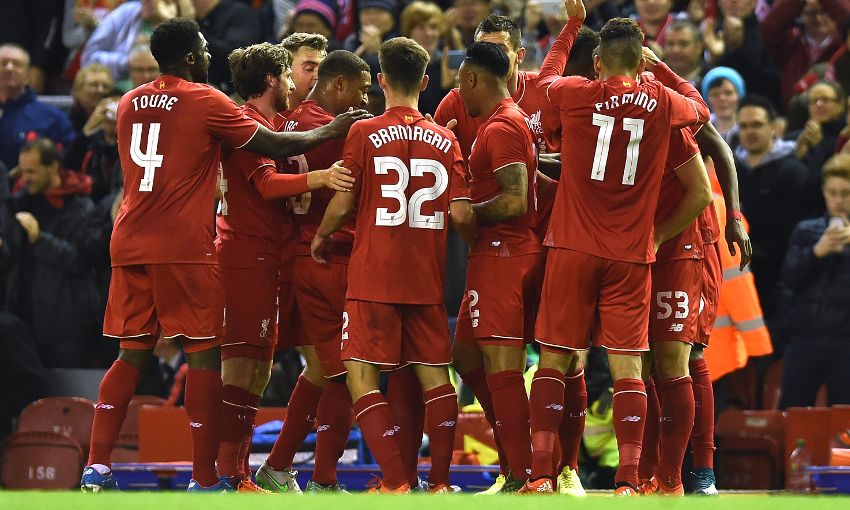 Nathaniel Clyne fired Liverpool into the quarter-finals of the Capital One Cup at Anfield on Wednesday evening, netting the decisive goal in a 1-0 home success.

The full-back struck his first goal for the club since a summer move from Southampton during the first half of a performance full of endeavour from Jürgen Klopp's men against the Cherries.

And that proved sufficient to guide the Reds into the last eight of a competition they have won on a record eight occasions.

As was hinted at during the pre-match press call, the manager made a number of changes to the starting XI in order to call on fresh legs for the fourth fixture in just 11 days.

Connor Randall was handed a Reds debut while Joao Carlos Teixeira and Cameron Brannagan both made their first senior starts in a young team captained by Kolo Toure.

The Reds almost made the perfect start as Roberto Firmino latched onto a pass in space on the right-hand side of the box but the Brazilian could not generate enough power on a shot that trickled just wide.

Bournemouth quickly evidenced their own threat, however, when a rapid counter-attack resulted in Junior Stanislas dancing into the box only to be thwarted by a brilliant Adam Bogdan save with a goal looking an inevitability.

Klopp's selection had given a number of players who have been absent from the starting XI of late the chance to impress and, of those, Firmino, Teixeira and Jordon Ibe had looked arguably the brightest in the early stages.

As a result, it was little surprise to see the three combine for the opening goal, even if it needed Clyne to slam the ball home after Teixeira's cheeky backheel was cleared off the line.

Bogdan was twice forced to deny Stanislas in the aftermath of that goal, first from a header and then a powerful free-kick.

But the Reds matched their visitors blow for blow with Firmino forcing a save following a clever nutmeg before Teixeira hit the side-netting on his left foot from close range.

Even the loss of Toure to injury, which saw the stand-in skipper replaced by Martin Skrtel, did not harm the hosts' rhythm as they dominated going into the break.

Although the second half opened with Shaun MacDonald sending a powerful header wide of the goal for Bournemouth, Liverpool quickly picked up where they left off.

Klopp's team were unfortunate not to extend their lead through Firmino on two occasions, with the No.11 pinching the ball high up the pitch and combining well with Ibe but shooting wide on both occasions.

His compatriot Lucas Leiva, who replaced Brannagan on the hour-mark, almost went one better with 15 minutes remaining when he stung Adam Federici's palms with a fine drive.

The Cherries goalkeeper was again called into action from a Teixeira free-kick as the hosts went in search of a second, while a productive evening for Firmino was brought to an end five minutes from time as Adam Lallana entered the field.

Divock Origi came agonisingly close to sealing it when he just failed to get a touch on a Lucas cross in the final stages before Matt Ritchie called on Bogdan in injury time to leave hearts in mouths among the home support.

But the Reds saw the win out to secure their passage to the next round of the cup.