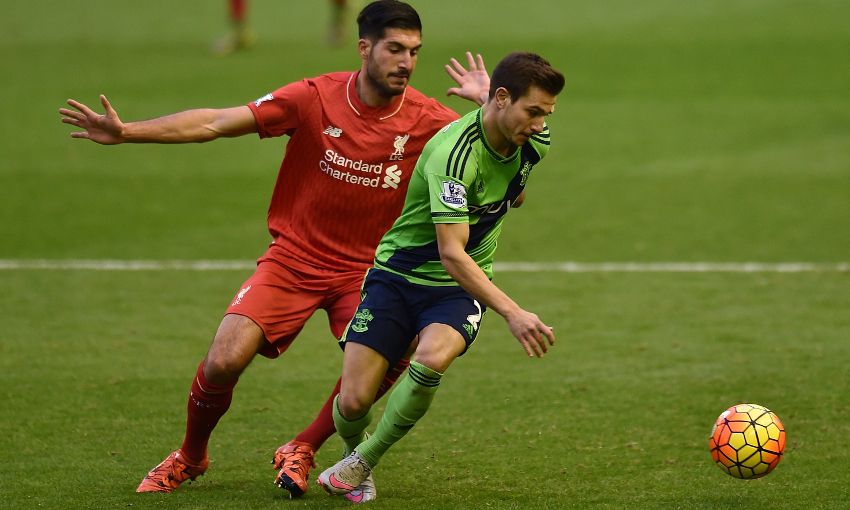 Jürgen Klopp was denied a first victory with Liverpool as Southampton equalised with four minutes remaining to claim a 1-1 draw at Anfield on Sunday.

The German was on course for a maiden win at the helm when substitute Christian Benteke leapt to power in a header from James Milner’s cross after 77 minutes.

But a Saints set-piece into the Reds box was nodded across the face of goal by Gaston Ramirez and allowed Sadio Mane to force home a leveller and secure a point.

There was consistency in Klopp’s team selection again, with just a single change from the side that started against Rubin Kazan on Thursday night – Lucas Leiva returned to the midfield in place of Joe Allen.

Nathaniel Clyne and Adam Lallana therefore faced their former team, who arrived at Anfield with two wins in their previous three games, including a 3-1 away victory over Chelsea.

The first glimpse of goal fell to Philippe Coutinho in the fourth minute, found with a diagonal pass into the edge of the area by Clyne, but Cedric Soares covered rapidly from full-back to get a leg in the way of the Brazilian’s drive.

Emre Can lost his marker at the near post from the subsequent corner and guided a finish wide, in what was nevertheless another promising early sign for the hosts.

Threats at the other end came in the form of a Jose Fonte header over the bar and a Graziano Pelle snapshot from 20 yards out – created by a one-two with Dusan Tadic – that was diligently blocked by Martin Skrtel.

Coutinho trained his sights from the left corner of the Saints box midway through the half, though his dipping blast did not drop enough to trouble Maarten Stekelenburg.

Milner was the next to get into shooting territory when he moved in from the left flank, bustled past the defence and exchanged passes with Lallana before curling an attempt off target to the right.

The No.7 then tried to tee up a chance with a lofted cross into the area from the opposite byline and Can was there to nod it down, but no teammate was close enough to the German to take advantage.

Virgil van Dijk should have broken the deadlock instead six minutes before the interval.

A swerving free-kick into the Liverpool box was perfectly weighted for the centre-half at the back post, yet his downward header lacked power and allowed Simon Mignolet to claw away.

So the teams headed back to the dressing room with the score goalless and upon their return, Klopp looked to alter that statistic by introducing Benteke for compatriot Divock Origi up front.

There was almost an immediate impact as the No.9 arched his body to volley at goal, but it was cleared away at the near post amid a succession of corner deliveries from the right.

The Reds were starting to work opportunities via the wings and after Lallana had lashed across the area from the right side, Alberto Moreno and Can combined on the other for the former to smash a cross-shot back that eluded everyone.

Pressure was building, though Southampton served a reminder of their threat when Mane scampered onto a ball over the top, clean through. Moreno’s recovery sprint and sliding tackle was as vital as it was exquisitely executed.

The visitors’ confidence began to grow and in an effort to switch momentum back in the other direction, the boss sent on Roberto Firmino for Lallana for the final quarter.

But genuine opportunities were scarce against a solid Saints backline, leaving Can and Coutinho to each wallop ambitious shots high into the Kop.

That changed on 77 minutes, however. Milner curled in an inviting cross from the right flank that Benteke ensured was his alone, sending an unstoppable looping header beyond Stekelenburg to put the Reds ahead.

But just as it seemed Klopp was ready to celebrate a first win as manager, a free-kick into the area was redirected across the box by Ramirez and Mane pounced yards out to equalise.