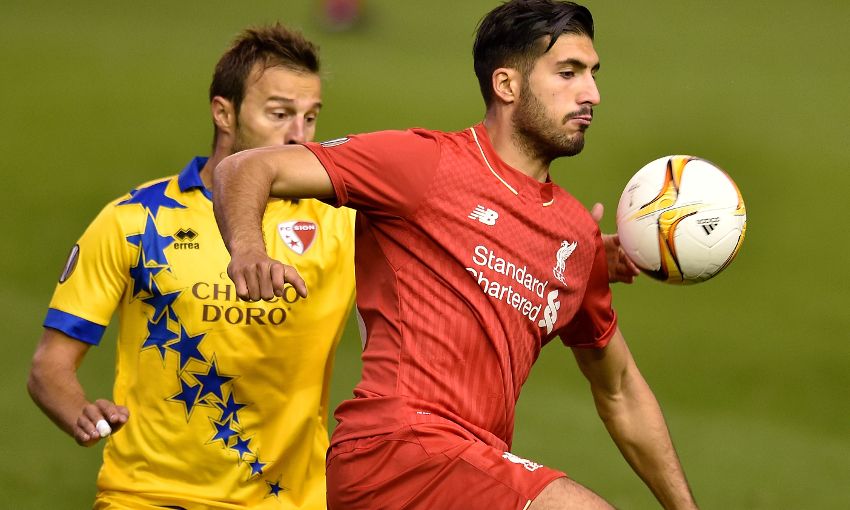 Liverpool's second Europa League outing of the season ended in frustration as they were held to a 1-1 draw by a resolute FC Sion at Anfield on Thursday evening.

Adam Lallana's opener looked to have set the hosts on their way to a convincing victory, coming as it did in the fourth minute, but a speedy response through Ebenezer Assifuah gave Didier Tholot's side something to hold onto.

And, despite Liverpool creating a string of chances as they searched for a second goal from that point onward, the Swiss visitors held firm to claim an unlikely point.

Brendan Rodgers made seven changes to the team that beat Aston Villa when the Reds last ran out at Anfield, with a number of players given a fresh chance to impress.

One of those returning stars, Jordon Ibe, underlined his intentions early on with a dangerous run down the left that yielded a free-kick which the visitors defended well.

But Sion goalkeeper Andris Vanins was picking the ball out of his net with just four minutes on the clock when Divock Origi's powerful run teed up Lallana, who made no mistake in side-footing home.

The early goal didn't sate the hosts' appetite, with Origi again tormenting the opposition full back down the right before seeing a shot deflected wide.

Danny Ings then saw a clipped effort well saved by Vanins following Joe Allen's clever throughball from the edge of the area.

But, to their credit, the Swiss visitors would not lie down, and they were back level when Assifuah toed home after collecting a well-weighted cross-field ball on the right of the box.

Ings thought he had restored Liverpool's lead in the immediate aftermath of that goal, but was adjudged to have been stood in an offside position when receiving Nathaniel Clyne's centre before tapping in.

Liverpool refused to allow that disappointment to dampen their attacking intent, as they continued to pour forward in search of a second goal.

Emre Can almost provided the breakthrough with a dangerous cross from the right while Ings will have been disappointed not to get something on an equally teasing delivery from the left courtesy of Lallana.

With half-time approaching the Reds remained in control, but arguably their best chance went begging when Origi waited too long to pull the trigger after good link-up between Allen and Ings.

Alberto Moreno was introduced in Clyne's stead at the break, allowing Ibe to take up a position on the right, and the increased attacking emphasis almost paid instant dividends when Ings latched onto a ball over the top only for his near-post effort to be stopped.

Stand-in captain for the night Kolo Toure was the next Reds player to muster a shot, but his remarkable overhead kick attempt clipped the bar as the Kop drew breath for what would surely have been a rapturous celebration.

With exactly an hour gone, Ings set himself up for a similarly acrobatic effort that failed to trouble the visiting goalkeeper.

Regardless, the pattern had been set for the remainder of the game, and the introduction of Philippe Coutinho on the hour mark provided little encouragement for Sion that they could hold out.

It looked like Allen's brilliant pass in behind from deep would be the moment that pressure told, but Origi could not beat the keeper in a one-on-one situation as the frustration continued.

Simon Mignolet then needed to be alert to keep out Assifuah's snap shot following a smart turn as Sion reminded the Reds that they too carried a threat.

With 20 minutes remaining, Lallana had the chance to double his personal tally when he collected a Moreno cross in the box, but the Englishman's left-footed shot was collected by a diving Vanins.

And that chance served to encapsulate a night of near misses as Sion hung on throughout a late onslaught to collect a share of the spoils.