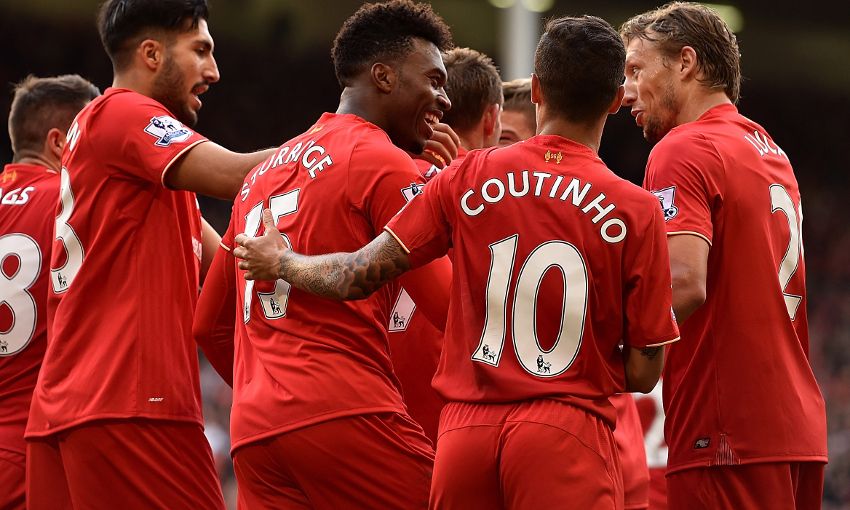 Daniel Sturridge scored twice in a goal-filled second half to guide Liverpool to a hard-fought 3-2 victory against Aston Villa at Anfield on Saturday.

The forward contributed a pair of stunning finishes at the Kop end in what became a frenetic Barclays Premier League clash, as the Reds ultimately returned to winning ways.

James Milner had opened the scoring just a minute into the game, while Rudy Gestede grabbed both for the visitors – including one towering header.

Pre-match team news had confirmed a second start of the season for Sturridge, partnered with the in-form Danny Ings up front for the third of four consecutive home fixtures.

Villa had previously proven something of a bogey side at Anfield – winning on two of their previous three visits – while Brendan Rodgers’ team were searching for a first league win since August 17.

But this time the Reds were ahead within 66 seconds.

Philippe Coutinho helped work the ball to Milner in space to shoot at the edge of the box and the captain gladly clipped a precise left-footer that skidded along the turf and nestled into the bottom right corner. It was his first goal for the club, against one of his old sides, and the perfect start.

Confidence naturally soared in the home team and fans, though there was a warning at the other end on six minutes, in the form of a Gestede header that drifted narrowly wide of Simon Mignolet’s far post after the forward had leapt high to try his luck.

Keen to follow his strikes in each of the previous two games, Ings soon worked Brad Guzan having been teed up by Emre Can, before the summer signing curled another attempt over when picked out by the influential Milner.

A moment of alarm ensued when Can failed to adequately clear a hopeful cross from the right by Alan Hutton, but Gestede sent his snap-shot wide and the danger passed.

Coutinho trained his sights on the top corner as the interval neared, skipping inside his marker and shooting 20 yards out only for the effort to deflect up off Carlos Sanchez and leave Guzan enough time to deal with the ball.

In the 40th minute, the Reds were relieved to see Ashley Westwood’s hit blocked away for a corner after some defensive hesitancy had presented the Villa midfielder with an opportunity.

Liverpool were on the front foot from the outset in the second half too, though Coutinho was thwarted by the opponents between him and the goal as the Brazilian poked a low shot towards the net.

Next, Nathaniel Clyne was denied by a crucial intervention from Jordan Amavi as he seemed primed to tap in a rebound at the far post, Guzan having kept out a Milner drive in the build-up.

Neither the visiting goalkeeper nor backline could do anything about the second goal, however.

Milner had the vision at the left edge of the Villa area to loft an inviting pass into the supporting run of Sturridge, who took the most difficult option of a first-time volley but executed it in stunning fashion to thrash his finish into the opposite corner for 2-0.

The Reds now had a measure of control over proceedings, until an unexpected flurry of goals in four manic minutes.

First, Gestede halved the deficit for Tim Sherwood’s charges by sneaking in at the back post and meeting a cross from the right to convert at close range with a quarter of the contest remaining.

However, Sturridge was celebrating less than a minute later as a cool dribble carried the Englishman through the Villa defence and into a position to direct a passed finish beyond the reach of Guzan in front of the Kop.

But the No.15’s double salvo was quickly matched by Gestede, whose physical presence allowed him to run onto a swinging cross from Amavi on the left and power a header past Mignolet.

Coutinho called Guzan into action with a curling set-piece destined for the top corner, and to a lesser degree with a shot from a central area, while the American also denied Sturridge a hat-trick, but Rodgers’ side had already done enough to secure all three points.