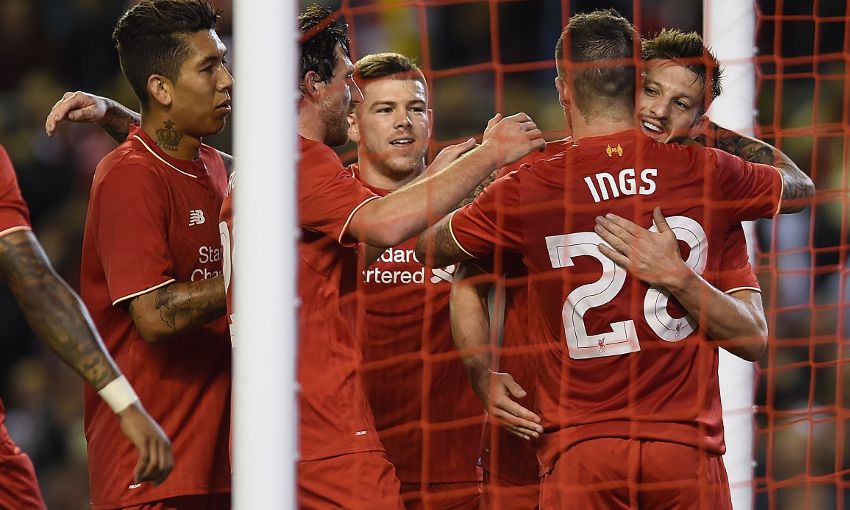 Adam Bogdan was the penalty shootout hero on his full Liverpool debut as he saved three spot-kicks to see the Reds past Carlisle United and into the fourth round of the Capital One Cup.

Extra-time had failed to separate the two teams, who netted their goals in the first half through Danny Ings and Derek Asamoah respectively, leaving their cup fates in the hands of the lottery of penalties.

And it was Bogdan who proved the hosts' saviour as he marked his competitive bow by stopping efforts from Danny Grainger, Luke Joyce and Bastien Hery to secure a 3-2 shootout success for the home side.

The Reds will now face Bournemouth in the next round after being paired with Eddie Howe's side during a thrilling conclusion to matters at Anfield on Wednesday evening.

After notching his first competitive goal for the club in the weekend draw with Norwich City, Ings was included in Brendan Rodgers' team from the off for the first cup tie of the new season.

Martin Skrtel, meanwhile, clocked up his 300th appearance for the Reds as part of the starting XI, while Joe Allen returned from injury to take his place in midfield.

The hosts made a bright start in front of a packed Anfield, with Adam Lallana and Roberto Firmino both sending efforts just wide from the edge of the area in the opening stages.

And in the eighth minute James Milner was presented with a fine chance thanks to Ings' first-time cut back in the box, but the midfielder could not get strong contact as the visiting goalkeeper gratefully collected.

Hery's shot over the bar on the break offered brief respite from an early onslaught for Carlisle but Ings went close twice straight after with two efforts that bobbled wide.

When the breakthrough finally came the identity of the man who provided it came as little surprise, with the Reds' No.28 meeting Lallana's cross from close range to nod home.

Liverpool continued to dominate proceedings from that point, but their failure to find a second goal gave Carlisle hope, and a raucous away end was sent into dreamland with 35 minutes gone when their team scored with a maiden shot on target.

A rapid counterattack led by Hery resulted in Asamoah bearing down on goal and, though Bogdan got a hand to his near-post shot, it proved powerful enough to breach the Kop end net.

The Reds were forced to withdraw Firmino before the break, with Divock Origi introduced in his stead, but that did not disrupt the hosts' rhythm as they continued to probe for a second goal.

That pattern of play continued following the resumption of the game with Emre Can seeing a shot blocked at the edge of the box early before Milner, Ings and Origi all went close.

With an hour gone and a second goal still eluding his team, Rodgers moved to introduce Philippe Coutinho from the bench in the place of Allen, and the Brazilian saw a shot deflected wide within two minutes of his arrival.

He followed that up with a stinging drive from distance that was punched into a dangerous area by Mark Gillespie, but Liverpool failed to take advantage as the visitors cleared again.

The flow of attack after attack from the hosts was relentless by this point, and both Milner and Lallana saw shots from the right-hand side of the area touch the side-netting when they might have done better.

Carlisle had a moment of promise of their own as the clock ticked down, with a dangerous delivery from a corner going straight through the box when a touch goalward would likely have resulted in a winner.

But neither side could find the breakthrough needed before full-time as the referee's whistle confirmed that extra-time would be necessary.

Origi and Carlisle substitute Jabo Ibehre traded shots on target in the early stages before the former again went close after a Milner strike deflected toward him, but neither side could add to their tallies before the end of the first period of added time.

And it was much the same in the second, with Dejan Lovren heading a corner narrowly wide and Ings unable to keep a shot under control after racing onto an Alberto Moreno throughball over the top.

The Reds were reduced to 10 men in the final minutes as Lovren was forced off following an awkward fall and that helped the visitors hold firm to send the match to penalties.

It was there that Bogdan had the chance to truly shine, and he ensured Lallana and Coutinho's saved efforts from the spot would matter little as he led Liverpool into the next round.