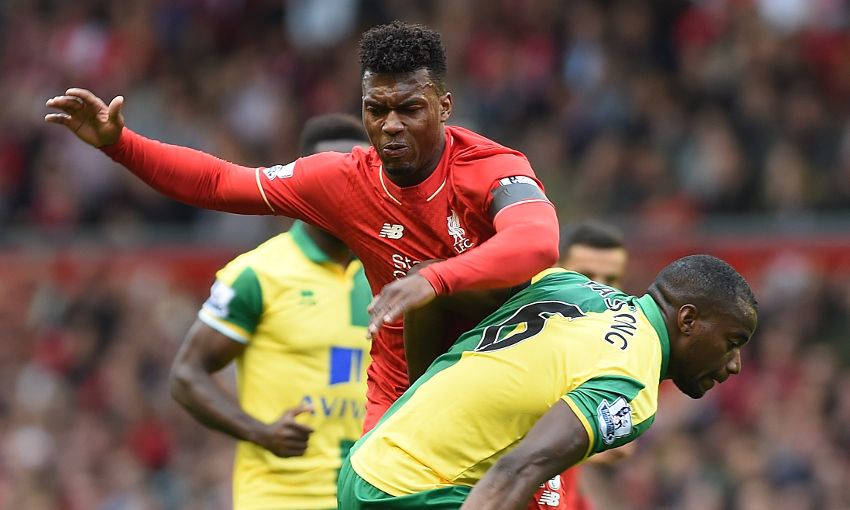 Daniel Sturridge made his comeback, but Liverpool were left frustrated after being held to a 1-1 draw by Norwich City at Anfield on Sunday.

The striker played for just over an hour in his first appearance in five months, but the Reds had to settle for a share of the spoils against the Canaries.

Half-time substitute Danny Ings made an immediate impact, opening the scoring just three minutes after coming on when he neatly tucked home Alberto Moreno’s pass over the top.

But Norwich levelled just after the hour when Russell Martin hooked over Simon Mignolet as the Reds failed to properly clear a corner.

As the game entered its final stages, Philippe Coutinho was presented with a golden opportunity to give Liverpool the lead once again, but was foiled by John Ruddy in a one-on-one situation as the visitors claimed a point.

The pre-match team news confirmed a return to action for Sturridge, with the No.15 selected in attack for the first time since April following hip surgery.

He was one of four changes Brendan Rodgers elected to make to the side that began the last Barclays Premier League outing against Manchester United, with Mamadou Sakho, Moreno and Coutinho also earning starting berths.

The Reds went into the contest aiming to record a first victory since defeating Bournemouth at home last month; however, the visitors provided stubborn resistance in the opening exchanges.

On 18 minutes, Emre Can’s cross-field pass allowed Moreno to scamper into the box. He pulled the ball back for James Milner, but the captain’s low drive was diverted away from goal by Sebastien Bassong’s lunging dive.

Liverpool’s next effort saw Nathaniel Clyne pounce on a loose ball and ping a shot just beyond the far post, but neither goalkeeper was forced into a save in the opening half hour.

On 34 minutes, Ruddy was called into action, with the visiting custodian repelling a curling drive from Sturridge after Lucas’s through ball had played him into space inside the box.

Next, Coutinho glanced a Clyne centre well wide before a Milner volley from the edge of the area lacked the necessary power to find the back of the net as it was swept up by Ruddy.

At the other end, Mignolet had to pull off a flying stop to thwart Cameron Jerome’s cross-turned-shot as the opening 45 minutes ended without a mark on the scoresheet.

Liverpool made a change at the break, with Ings replacing Christian Benteke – and the striker needed just three minutes to open the scoring.

Moreno latched onto an attempted ball forward from Russell Martin and lofted a first-time pass over the Norwich defence into the path of Ings’ run. He took a touch on his chest before slipping an effort underneath Ruddy and into the corner.

With the deadlock broken, the Reds were now firmly in the ascendancy and Coutinho was inches away from doubling the advantage when he clipped narrowly over the bar from just inside the area.

However, the Canaries were level on 62 minutes. Mignolet’s punch at a corner for the away side fell invitingly for Martin, who hooked over the goalkeeper from eight yards out.

Liverpool’s No.22 was required to deny Matt Jarvis’ near-post strike moments later with a crucial save as Norwich threatened to take the lead, while Sturridge was withdrawn and replaced by Adam Lallana before Roberto Firmino was introduced for Lucas.

Firmino’s first involvement resulted in him stinging the palms of Ruddy while on 78 minutes, he created a glorious chance for Coutinho to regain the lead for the Reds.

His ball forward sent the No.10 scampering into the box, one-on-one with Ruddy, but his eventual effort was saved by the ‘keeper when a goal appeared inevitable.

The hosts piled on the pressure in the latter stages but were unable to muster a second goal as the points were shared.