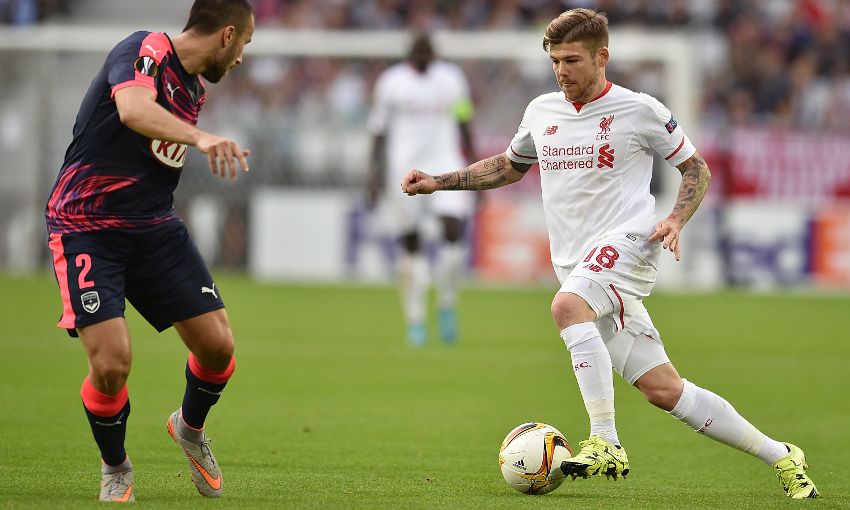 Adam Lallana scored on his comeback but Liverpool were held to a 1-1 draw by Bordeaux in the opening game of their Europa League campaign on Thursday evening.

The No.20 was back in the team after an injury lay-off and broke the deadlock on a hard-fought night in France with a classy solo goal midway through the second half.

But the Group B game ended with a point apiece after substitute Jussie pounced on a loose ball to clip into the roof of the Reds net nine minutes before full-time.

Eight changes to the Liverpool line-up were confirmed ahead of kick-off, with Philippe Coutinho returning from suspension, Divock Origi making his first Reds start and Mamadou Sakho captaining the team.

Simon Mignolet, meanwhile, clocked up a 100th appearance for the club since his switch to Anfield in the summer of 2013.

Coutinho had the first sight of goal after four minutes in France as he moved dangerously into space at the edge of the box, only to drag his low left-footer narrowly wide of the right post.

The next warning to Cedric Carrasso was served by Emre Can, who attempted a looped finish over his own head inside the area from a corner that the goalkeeper collected comfortably.

Within seconds the hosts rushed to the other end and should have taken the lead.

A cross-field pass found Diego Rolan with freedom to exploit in the left channel but the Bordeaux forward clipped an effort too high over the outrushing Mignolet to get the ball back down into the net.

It was a similarly frustrating story for Wahbi Khazri on 19 minutes, his strike on the diagonal 12 yards out drifting off target following an astute pull-back by Nicolas Maurice-Belay.

Kolo Toure’s evening was brought to a premature conclusion midway through the first half due to injury. Pedro Chirivella was introduced for a senior debut and Can dropped into Brendan Rodgers’ three-man defence.

A quieter period ensued, until both sides went close to breaking the deadlock in the final moments of the first half.

Initially, a driving run through the centre carried Khazri all the way to a one-on-one with Mignolet and the Liverpool ‘keeper was relieved that the eventual attempt was straight at him.

Carrasso was helpless to stop the response produced by Coutinho, but the post unfortunately did. The Brazilian had unleashed a brilliant blast from 20 yards, on the left angle, which bounced off the woodwork.

It was the 58th minute before a chance was fashioned by either team after the interval.

Coutinho was a key figure in the build-up as usual, playing Lallana through into the box, though the Englishman was denied by the body of Carrasso after a neat turn and hit.

Back came Bordeaux and Mignolet marked his century of Reds appearances with a crucial save.

A Rolan cross from the right flank arrived at Maurice-Belay at the far post, but Mignolet launched from his line to thwart the finish and Enzo Crivelli contrived to waste the rebound.

And they paid the price seconds later.

Lallana collected possession from the left wing and elegantly dribbled into shooting space before planting a side-foot strike into the bottom right corner to register a superb individual goal.

Substitute Danny Ings was denied a second by Carrasso from a similar angle to the first, while Mignolet reacted well to catch a looping volley by Crivelli.

But the latter did finally help his team restore parity when he kept control of a bouncing ball which ultimately moved to Jussie, who directed a shot past Mignolet into the top corner to claim a draw.