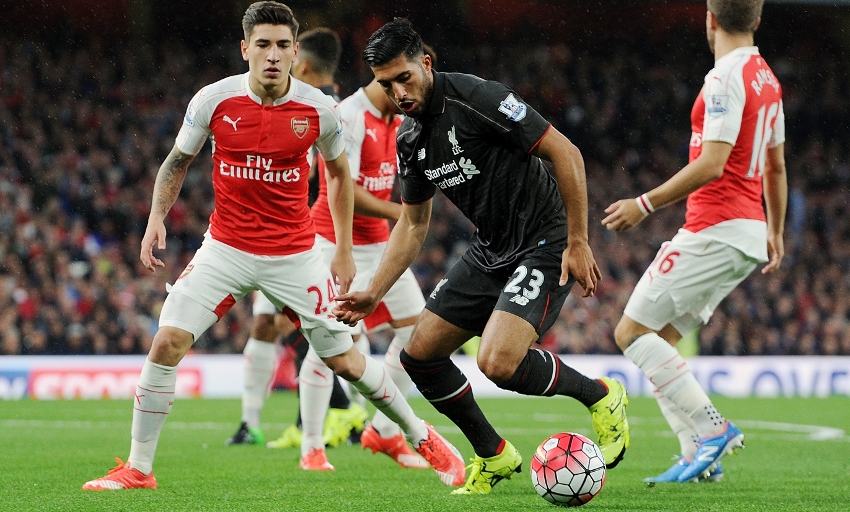 Philippe Coutinho struck the woodwork twice as Liverpool dominated much of a goalless draw against Arsenal at the Emirates Stadium on Monday.

The Reds turned in a performance of great control throughout a thrilling encounter in the capital and were kept out repeatedly by Petr Cech during the first half.

It was a more even affair after the interval, though neither side found the winner, meaning three successive clean sheets for the visitors and seven points out of nine.

Brendan Rodgers made three changes to the line-up that began against Bournemouth a week ago, handing summer signing Roberto Firmino a first competitive start for the club.

Emre Can and Lucas Leiva were also brought into the XI, while Jordan Henderson’s foot injury meant the captain was absent from the squad and James Milner led the team.

Christian Benteke had already scuffed one shot wide of the left post from inside the area before the Belgian was involved in a sweeping move that saw the Reds shake the woodwork in the third minute.

He sped into space on the right flank and onto a clever Milner pass around the outside of the Arsenal defence, then picked out Coutinho with a pullback. The No.10 struck a first-time curler which clattered the crossbar and bounced away.

The tempo of the game was sensational and soon the Gunners were close to breaking the deadlock.

First, Alexis Sanchez nodded a promising chance over at the back post, under pressure from the covering Joe Gomez.

Then Aaron Ramsey rippled the back of the net at the near post after collecting a defence-splitting Santi Cazorla ball. But the linesman on the opposite flank flagged for offside and the midfielder’s celebrations were cut short.

Benteke worked Cech with a low, driven effort, and Coutinho was thwarted at the final moment when he capitalised on hesitation among the home backline, surged forward and aimed to shoot from a central area.

Buoyed by the manner of their start, the Reds sensed an opportunity to dominate the flow of the game and did so with increasing confidence.

Another last-ditch intervention was required from Gabriel, for example, as Coutinho pounced on a flick-on in behind and moved to the edge of the box with menace.

Next, the best chances of the match and a series of unbelievable saves.

More intelligent approach work featured Coutinho lofting a pass over the top for an open Firmino. The Brazilian immediately squared to the waiting Benteke yards out, but Cech somehow managed to stick out a hand and deny the Belgian.

From the subsequent corner, the Gunners goalkeeper stretched quickly to stop a hit on the angle by Firmino as Rodgers’ charges relentlessly attacked.

Having already struck the bar, Coutinho was then frustrated by the post just before the break. Cutting in from the left wing, the 23-year-old unleashed a piercing effort that Cech touched with fingertips onto the frame of the goal.

As was to be expected, Arsene Wenger’s team returned from the interval with the bit between their teeth.

The talented Sanchez was suddenly seeing more of the ball and Olivier Giroud offering a target to play off. And the pair combined to tee up the former inside the box on the hour mark – but he fired against the post himself.

A creditable contribution from Firmino in north London ended moments later as Rodgers introduced Jordon Ibe to freshen up his forward line.

With 20 minutes remaining, it was Simon Mignolet’s turn to produce heroics between the posts.

Arsenal switched the play rapidly from left to right and fed the ball into the middle, where Ramsey prodded into Giroud’s path. The Frenchman was slightly off balance as he clipped towards the corner, but the Reds stopper’s reactions still had to be fast to maintain the stalemate.

Jordan Rossiter made his Barclays Premier League debut as a substitute late on and the Reds continued to press for a breakthrough that would have secured a third straight win.

But it was ultimately a point apiece at the conclusion of a game that never seemed likely to end without a goal.