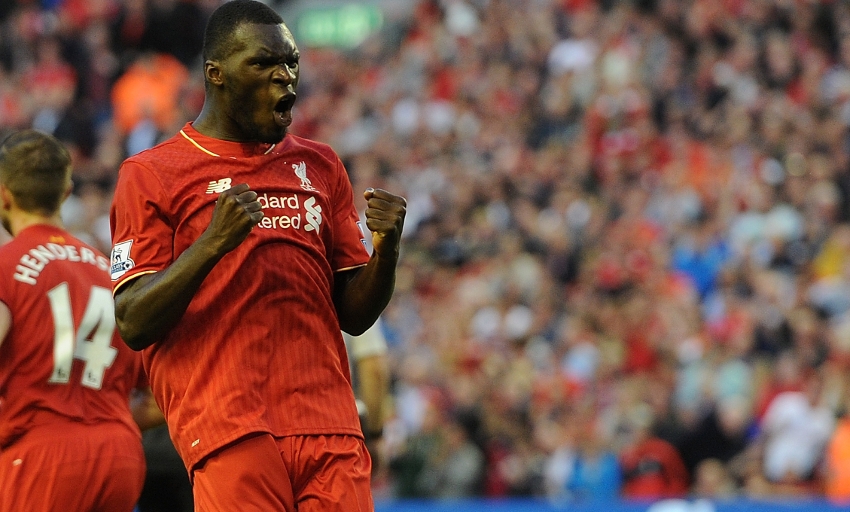 Christian Benteke bagged the winner at the Kop end on his home debut to give Liverpool a 1-0 victory over Bournemouth on Monday night.

The forward struck the only goal of the game midway through the first half at Anfield as the Reds recorded back-to-back triumphs in the Barclays Premier League.

They were made to work hard for the points as the newly-promoted outfit rallied after the interval, but the win and another clean sheet ensured a satisfying evening.

The Liverpool teamsheet was a carbon copy of the one at Stoke City, with exactly the same starting XI and substitutes selected by Brendan Rodgers for the first Anfield game of the new season.

Reds fans welcomed their side back after three months away with an especially loud rendition of ‘You’ll Never Walk Alone’. The visitors responded by making the hosts attack towards the Kop end in the first half.

And Bournemouth supporters were celebrating within five minutes, but their joy proved premature.

Their captain, Tommy Elphick, careered onto a corner from the right hand side and forced the ball into the back of the net via Dejan Lovren – but was immediately ruled to have fouled the home centre-back.

Benteke had already scored three times at Anfield before becoming Liverpool’s latest No.9, and he went close for his new club by sending a dipping strike off target from long range.

The Belgian was much nearer to the goal when he did break the deadlock, on 26 minutes.

Jordan Henderson’s curling cross from out on the left flank found a queue of teammates waiting to capitalise, with Benteke at the front to clip into the net and embark on a suitably passionate celebration. It was his 50th in English football.

Moments later, the captain himself was inches away from doubling the lead. James Milner teed him up with a short free-kick that the midfielder side-footed on the half-volley onto the top of Artur Boruc’s net.

Philippe Coutinho was beating the turf in frustration in the final seconds of the half. His attempt at a through ball rebounded back to him inside the box in a promising position, but the Brazilian directed an effort too wide to the left.

After the interval, it was the Cherries who threatened first.

Wide-man Matt Ritchie drifted into the centre and cracked a low, bouncing shot towards Simon Mignolet from 20 yards out. The Liverpool goalkeeper reacted well to get down and save.

Henderson had to hobble off seven minutes into the second period, so Emre Can was brought on and Milner assumed the armband.

Coutinho clipped one off target and it was the same result for Milner, diverting a delivery into the area by Jordon Ibe, as the Reds searched for a cushion in the contest.

Ritchie trained his sights again as the clock ticked onto the hour mark, thrashing a fierce hit narrowly wide of the near post having collected a cross that travelled all the way across from the opposite side.

Bournemouth were now in the ascendancy and sensed an equaliser could be achieved. Eunan O’Kane should have levelled too, instead firing into the side-netting after moving onto a neat pass through by Callum Wilson.

Looking to alter the momentum of the match, Rodgers introduced Roberto Firmino for his Anfield debut with 20 minutes remaining.

A superbly-timed Charlie Daniels block prevented Liverpool from claiming the goal they craved, Coutinho the man denied having been picked out by Benteke.

Ultimately, Rodgers’ charges didn’t need another and they’ll head to Arsenal in a week’s time with maximum points to show for their efforts so far.