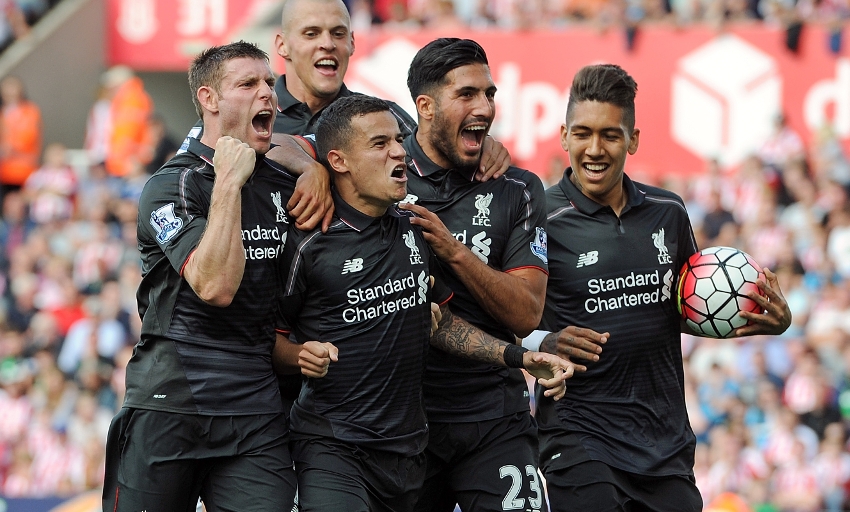 Philippe Coutinho scored a sensational late goal to hand Liverpool a winning start to their season with a 1-0 result over Stoke City on Sunday.

After a first half of very few chances at the Britannia Stadium, there were opportunities at either end throughout the second period.

And just as the tie seemed destined to end in stalemate, the Reds’ No.10 lashed a vicious, swerving finish into the top corner to settle it in his side’s favour.

The first quarter-hour of the contest passed by in a flash as both outfits burst out of the blocks to make an early impression, though neither produced an opening worthy of note.

Adam Lallana and Coutinho each saw space open up just outside the Stoke area for shots at Jack Butland, but the former’s curler was deflected away and the latter was blocked out before threatening.

There were encouraging avenues in either direction as Benteke and Coutinho laid the foundations for an effective combination with some short-range passing and Ibrahim Afellay exhibited fancy footwork surging forward for the Potters.

And Mark Hughes’ team were left wondering how they hadn’t earned an advantage as the clock ticked into a 36th minute.

A counter-attack along the right flank released Marco van Ginkel, whose delivery was touched by Simon Mignolet and hooked clear by Martin Skrtel. At the end of the subsequent scramble inside the Liverpool area, former Reds full-back Glen Johnson scooped a left-footer over the crossbar.

The hosts returned from the dressing room especially quickly for the second period and within 30 seconds of the resumption, Van Ginkel struck a low drive into the hands of Mignolet.

Despite that, it was the visitors on the front foot and Lallana was a vision of disappointment when Jordon Ibe neatly played the supporting Clyne behind in space and the defender’s tee-up was cut out.

Shortly after the hour mark the manager introduced Emre Can in place of Lallana and made a subtle alteration to the set-up of his midfield and forward line in search of the breakthrough.

Moments later Stoke nearly found it as a swinging, dangerous Charlie Adam free-kick from the right eluded Mame Diouf in the middle and forced Mignolet to palm away.

Next Coutinho went bounding through the centre and all the way to the box, where he was crowded out as he looked to pull the trigger and Benteke suffered a similar fate from the rebound.

Butland comfortably climbed to collect a Skrtel header towards the top corner before Jordan Henderson and Benteke were on the wrong wavelength as the captain raced onto a Milner pass over the top and sought the striker.

With little under 15 minutes remaining it was time for Roberto Firmino to make his Barclays Premier League bow, brought on in place of Ibe to change up the attack.

Stoke responded and Diouf nodded off target to the left having been found by Johnson’s inviting cross to the far post as the seconds evaporated.

But there was still time for Coutinho to produce the decisive magic.

The Brazilian collected a Gomez pass infield, spun off marker Steve Sidwell and whipped a glorious shot, dipping and moving through the air, past Butland’s stretch to dramatically claim the points.

Watch the Reds in style v Bournemouth with our great hospitality packages. Click here to find out more.