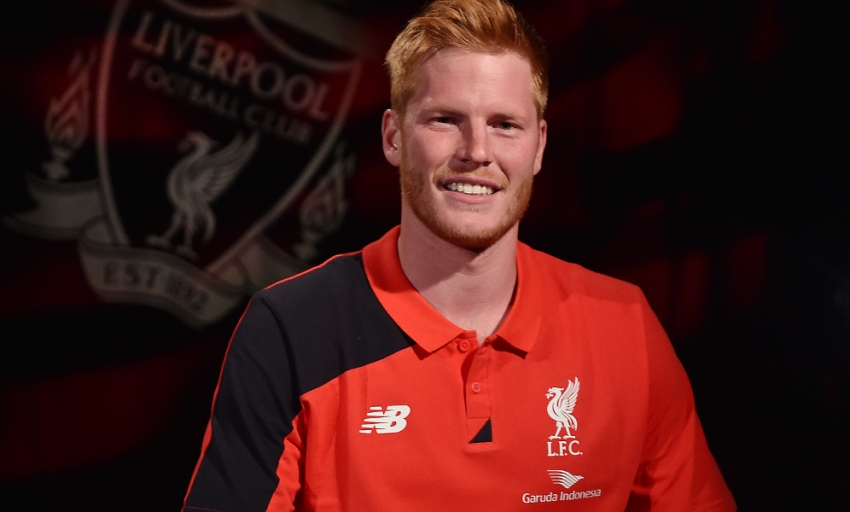 Adam Bogdan has reiterated a pledge to do everything in his power to make the most of an opportunity at Liverpool as the new goalkeeper begins life at Anfield.

The Hungarian stopper joins the club on a free transfer from Bolton Wanderers, bringing eight years of experience in English football with him.

After more than a century of appearances in the Barclays Premier League and Championship, Bogdan is determined to reach new heights with the Reds.

In his first interview as a Liverpool player, the 27-year-old talks of competing with Simon Mignolet, proving his worth and the impact 'You'll Never Walk Alone' has already had on him.

LFCTV GO subscribers can watch the exclusive chat by clicking play below - sign up now.

Welcome to Liverpool Football Club - how pleased are you that this move has now been completed?

Thank you very much. I'm over the moon, to be fair. It's a massive step in my career and I'm looking to enjoy it.

What were your first emotions when you heard that Liverpool were interested in you?

The first emotions were that I was obviously very happy - I couldn't sleep for two days. It still hasn't sunk in properly yet. But I'm looking forward to it and I'm really happy.

Who did you first speak to when this deal was going through? Who did you look to for advice?

I obviously spoke to my wife first of all. I heard about it from my agent. But I tried not to think about it too much while it was just at a negotiation stage. Once it was being clarified and looking like it was going to happen then obviously I was telling all of my friends and my family, of course.

Was it an easy decision for you? Because you're making a step up to the Premier League and European football, but you had been at Bolton for such a long time...

On one hand, it was an easy decision of course - I'm playing for one of the most famous, if not the most famous club in the world, playing in Europe and challenging for titles. But on the other hand, I played for Bolton for eight years; I loved the club and thank them a lot. So that was hard, but not in professional terms.

You've had some time since the news broke that you were going to join Liverpool for it to settle in your mind. Does it feel real yet?

It's getting to feel real now. It's going to take time, but once we start training I'm sure I won't have time to think about it anymore and would just like to do my job and get better every day.

You wrote a letter to Bolton's fans after this move was announced - why was that important to you?

I was there for eight years and it was not just to the fans, but the whole football club. Bolton was the club that made my dream come true - playing in the English Premier League. Ever since I was a boy that was the only thing I could think about, to play in the English Premier League. I did that with Bolton and I'll always keep them in my heart. That's why I thought it was important to say a proper goodbye to them. Obviously I can't go and shake everybody's hand but I think it was important to let everybody know how I feel about them.

You also said in that letter that you want to make the most of the opportunity that you've been given at Liverpool. How do you intend to do that?

Of course, I would like to take this opportunity and play as many games as I possibly can, and be a No.1 'keeper for Liverpool. How do I do that? I have to do it on the training ground first of all, I have to prove myself and prove to the manager that I'm able to do that. Then when I get the chance, I have to take it and play well. That's how it works.

Historically, Liverpool fans have very strong relationships with goalkeepers. Are you keen to connect with the fans straight away here?

It would be very nice to connect with them straight away. I think the way to achieve that is by hard work and I mean it - I cannot see any other way of achieving that than hard work on the training ground, then when I get the chance, take it and play well and do that every time.

You certainly played well at Anfield earlier this year when you came with Bolton. How much of a chance did you have to soak up the atmosphere of the stadium that day?

A lot! I tried to tell myself not to get involved in it too much, because I was trying to concentrate on my job. But you cannot hide away from it and I didn't want to hide away from it, it was something fantastic. When the fans started singing 'You'll Never Walk Alone', it was incredible and just gives you the buzz to play - whether it's the opposition or a home player. It's fantastic that I can get a chance to feel that in every home game.

How much did you know about Liverpool as a youngster growing up in Hungary?

It is one of the most famous clubs in the world. When I was young, watching football and wanting to be a football player, I was watching a lot of games. I remember the [2001] UEFA Cup final and also the [2005] Champions League final. Everybody in Hungary knows about Liverpool and everybody knows what a big club it is, so I knew a lot.

Tell us about yourself as a goalkeeper - what are your strongest attributes?

I would say the ability to learn, I think without that I would never be here. I like to think I command the area, and I like to come out and leave my area. But I wouldn't like to say too much about it in case a striker listens!

On learning, you have been in English football for eight years so you have got a wealth of experience. How do you think you have changed from the young goalkeeper who arrived at Bolton in 2007?

Obviously I have changed a lot - I had to, otherwise I would be [back] in Hungary already. It was a massive step up for me to come to Bolton and adapt to training and the speed of the game, but I managed to do it. I evolved and became a better player, I calmed down and made better decisions. This is the next step and I would like to keep improving and keep getting better.

Are there any particular goalkeepers that you've studied closely or followed during your career?

When I was young, it was Peter Schmeichel. He was exceptional. When I got to Bolton, it was Jussi Jaaskelainen. I had a chance to work very closely with him and learned a lot from him. At the national team, it's Gabor Kiraly. Of course, you try to look at other 'keepers and try to learn from them, it's an easy way to learn. So there were many of them who I looked at and tried to study.

You'll be competing with Simon Mignolet for a place between the posts. How much are you relishing that challenge?

Could this move and that challenge of competing with Simon be beneficial for you on the international stage?

Absolutely - to compete with somebody like Simon can only make me better. He sets the bar very high. I hope that can help me with the national team. It's a dream of mine to play for the national team, I have managed to get 19 caps so far and I would like to have more of course. I believe I can.

Finally, what would be your No.1 ambition to achieve during your time at Liverpool?

My No.1 personal achievement would be to play as many games as I possibly can. With the team, which is more important, I would like to win trophies. I think we have a really good chance to do that and that's what it's all about. I'm really excited to join a club where I have a chance to do that.