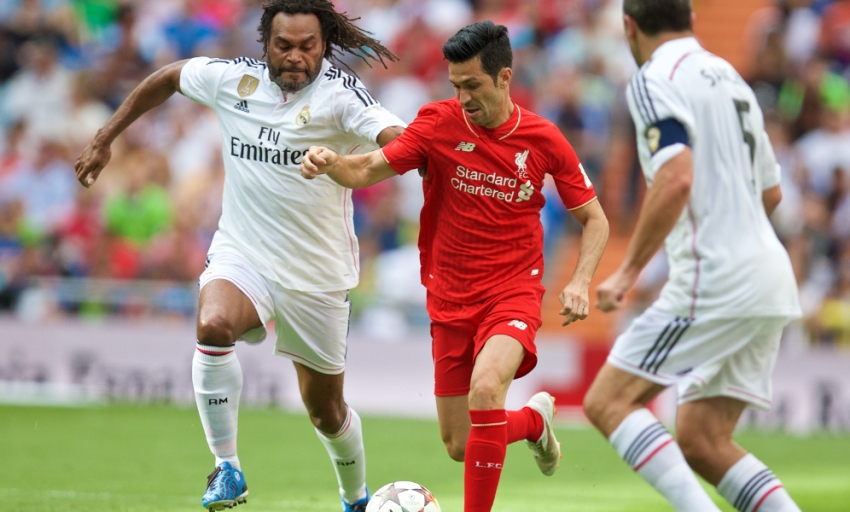 Liverpool FC Legends were narrowly beaten in their first official match as Real Madrid recovered to win 4-2 at the Santiago Bernabeu on Sunday evening.

The Reds had raced into a two-goal lead midway through the first half in the Spanish capital thanks to headers from Harry Kewell and Michael Owen.

But a brace of emphatic penalties by Roberto Carlos hauled the hosts level, and a clever Jose Emilio Amavisca conversion completed the turnaround.

Ivan Perez added a fourth, from what was actually an offside position after a fortuitous bounce of the ball, on 82 minutes and the victory was Real's.

The iconic Bernabeu stadium was packed with supporters and an obvious anticipation for an opportunity to watch many of the two clubs' legendary stars.

Charity was the overriding cause of the day, with funds being raised for the Real Madrid Foundation, but pride was always going to guarantee a competitive edge too.

The Reds showed little sign of rustiness in the opening stages and with Steve McManaman immediately settling into a passing rhythm from the centre and Kewell hugging the left flank as an out ball, they attacked with confidence.

Two crosses into the Madrid area by Kewell had threatened to provide Owen with a tap-in, before the Australian did tee up Luis Garcia 10 yards out - but the attacker saw his shot deflected wide.

But, on 17 minutes, they got their reward.

Jason McAteer crept forward along the right wing and lofted an inviting delivery towards Kewell inside the box, where the wide-man climbed superbly to power a header into the top corner for 1-0.

A burgeoning belief was increasingly evident among the visitors and their advantage was doubled soon after. Again it was provided by an accurate McAteer cross, this time for Owen to connect with a diving nod which skidded low into the net.

Robbie Fowler whipped a delightful free-kick from distance onto the top of the right post, before Owen's side-foot finish was stopped by the goalkeeper, as Real managed to avoid shipping a third.

But, slowly, the Spanish giants turned the tide and Jerzy Dudek was helpless when Michel Salgado moved onto the ball and thrashed a fierce effort against the woodwork.

There was nothing the Pole could do when Steve Harkness was penalised for handball three minutes before the break, either. Carlos stepped up to wallop the spot-kick home in trademark fashion.

Wholesale changes took place for both sides at the interval, including McManaman, Fernando Morientes and Owen swapping shirts to play for the opposition.

It was déjà vu on 50 minutes, though, as Madrid made it 2-2. Jamie Carragher was judged to have handballed inside the area this time around and Carlos promptly blasted the penalty with success to level the tie.

The home side started to take control as the match matured and Perez was thwarted by Liverpool goalkeeper Sander Westerveld having been fed in the left channel by Zinedine Zidane.

But with three-quarters of the encounter played, a similar move allowed Real to assume the lead.

Clarence Seedorf's poise and vision in bringing possession forward set up the supporting Amavisca, who clipped a shot inside the near post courtesy of a slight deflection off Abel Xavier.

Carragher was forced to quietly bemoan the lack of an offside flag when Perez knocked in a fourth from close range late on, as the Reds were ultimately edged out on the night.