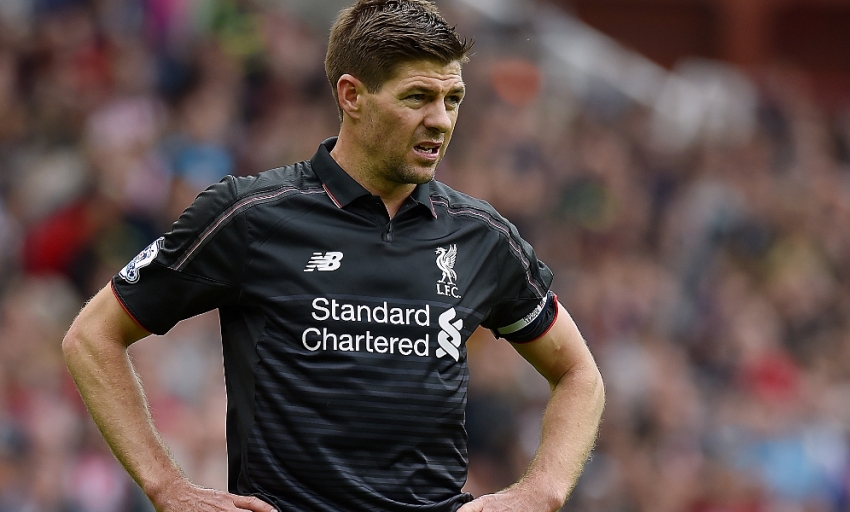 Stoke City spoiled Steven Gerrard's final Liverpool appearance by stunning the Reds with a 6-1 victory at the Britannia Stadium on Sunday.

The captain ran out for his 710th and last appearance for the Reds before he moves to America this summer for a new challenge in his stellar career.

But the Barclays Premier League contest provided no special send-off for the midfielder, as the Potters decimated such hopes in the opening period.

Mame Diouf broke the deadlock in the 22nd minute with a close-range rebound and doubled the hosts' advantage shortly after by lashing in from outside the area.

Mark Hughes' outfit inflicted further damage on the half-hour through Jonathan Walters, who capitalised on a short Emre Can header to beat Simon Mignolet at the second chance.

It went from bad to worse for the Reds before half-time - Charlie Adam and Steven N'Zonzi successively found the net from distance to make it 5-0.

Gerrard added his name to the scoresheet with a nicely-taken finish 20 minutes before the end, but Peter Crouch headed home a sixth late on to round off a day to forget.

Brendan Rodgers had opted for three changes to his line-up - Mamadou Sakho paired with Martin Skrtel in defence, while Joe Allen and Lucas Leiva were selected in midfield at the Britannia Stadium.

Former Reds midfielder Adam has been in fine goalscoring form for Stoke and the game was barely five minutes old before he unleashed a left-footer from 20 yards that sped over the crossbar.

Liverpool's first opening was created by Gerrard, pinging a precise pass across the field to the waiting Philippe Coutinho on the right flank. The Brazilian's footwork allowed him to move into the box, but his eventual effort was skewed off target.

On 19 minutes, the No.10 turned creator. Along with Adam Lallana, the visitors had fashioned a two-on-two scenario and Coutinho found his teammate clear with a side-foot pass. The curler from a narrowing angle sailed wide of the far post, though.

And Stoke made Rodgers' charges pay heavily almost immediately with a surge of quickfire goals.

First, attacking along the left side, they moved possession inside to Adam and the Scot hammered another shot low toward the bottom corner which Mignolet could only push out into the feet of Diouf. It was a simple finish for the striker to open the scoring.

The Senegalese then grabbed his and the Potters' second four minutes later, sending a powerful drive swerving through the grasp of the Liverpool goalkeeper into the net.

What was an already difficult challenge became a mountain on 30 minutes. Can miscalculated a defensive header back to Mignolet and Walters swooped in. His first effort was superbly saved by the Belgian but he nodded home the loose ball.

The Reds were stunned and with Stoke not allowing them any time to regroup, the goals unfortunately kept coming.

Adam pounced on a Sakho pass infield to Lucas, robbed it, strode forward and drilled a strike into the near corner for a fourth four minutes before the break.

Right on the interval, Hughes' side extended the lead to five. N'Zonzi was the source, carrying the ball into shooting territory and dispatching a curler up and over Mignolet to add to a simply stunning scoreline.

When Rodgers' players emerged for the second half, Jordon Ibe and Kolo Toure had replaced Alberto Moreno and Can respectively.

Liverpool assumed greater control of the ball having adopted a 3-5-2 formation but struggled to create any genuine opportunities to reduce the deficit up to the hour.

There was a sight of goal for Lallana in the 64th minute, found by a Coutinho set-up via touch from Gerrard, but the Englishman's attempt was thwarted by Asmir Begovic.

At the other end, however, it was only a last-ditch, sliding Jordan Henderson tackle that prevented Marko Arnautovic from sweeping past Mignolet after a Potters counter-attack.

An enterprising Ibe dribble down the wing saw the 19-year-old pull back for Gerrard, who took a touch and sought the top corner with a whipped hit that was just too high.

But his next shot was inch-perfect. Substitute Rickie Lambert's flick-on was seized upon by the skipper and he made no mistake this time by calmly rolling to the side of Begovic. Applause rippled from every section of the ground in recognition of the No.8.

There was nothing to celebrate, though. Crouch nodded a sixth against his former employers and the season concluded with Liverpool taking sixth place in the Premier League and a spot in the Europa League qualifiers for 2015-16.