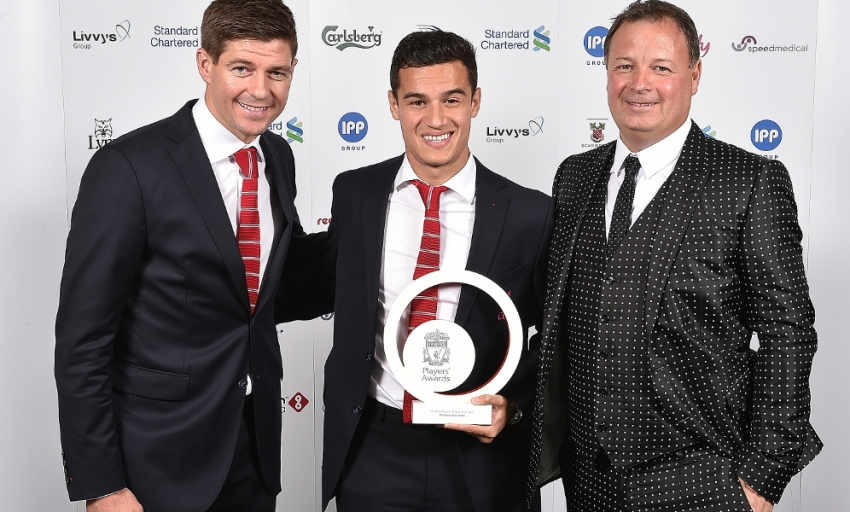 Philippe Coutinho scooped a quartet of personal honours while Steven Gerrard's career achievements with Liverpool were celebrated at the 2015 Players' Awards on Tuesday night.

The Brazilian was voted the Reds' Player of the Year by supporters after an online vote and was also selected as the stand-out first-team performer by his colleagues from Melwood.

Coutinho's accolades at the Echo Arena ceremony arrived as recognition for a stellar individual campaign, which has included eight goals in 51 appearances by the popular No.10.

One of those strikes, a searing hit into the top corner from long range past Southampton at St Mary's in February, picked up the Goal of the Year prize from Liverpool fans too.

And the 22-year-old was the supporters' selection for Performance of the Year - collecting a fourth award on the evening for his match-winning display against Manchester City at Anfield.

As well as acknowledging the efforts of players, staff and supporters across the club, the event was an opportunity to pay homage to Gerrard before his final appearance at the weekend.

After bidding farewell to Anfield last Saturday, the captain was presented with an Outstanding Achievement Award by Dave Shannon and Hughie McAuley for his incredible 17 years here.

Elsewhere at the prestigious ceremony, which was attended by thousands of fans, Raheem Sterling - who has contributed 11 goals this season - received the Young Player of the Year honour.

Joao Carlos Teixeira was named Academy Players' Player of the Year after a productive loan spell with Brighton & Hove Albion, while Liverpool Ladies chose Fara Williams as their No.1.

Half a century on from the Reds' first ever FA Cup triumph, two heroes from that historic day at Wembley - Ron Yeats and Ian St John - were handed Lifetime Achievement Awards by Robbie Fowler.

Away from the pitch, the Supporters' Club of the Year trophy went to OLSC London, Chris Anders received the Bill Shankly Community Award and Ian Wallace was presented with the Staff Recognition Award.